Skip to content
Become a member and get exclusive access to articles, live sessions and more!
Start Your Free Trial
Home > Features > Wayne Wallace Does It All Across Cultures 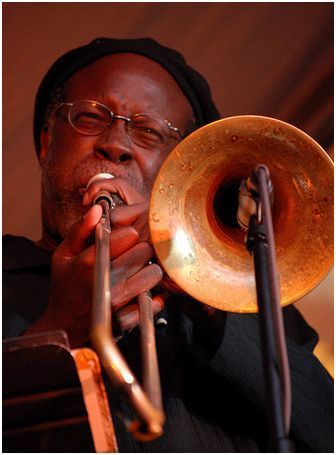 Tall and lanky, San Francisco-based trombonist Wayne Wallace walks with an easy rolling stride, moving with the athletic grace of a man who’s taking his time. In conversation, he pauses thoughtfully before answering a question, carefully choosing his words in a manner that comes across as introspective rather than guarded. At 59, he’s old enough to have broken the color line at several venues yet young enough to be in the midst of a thriving career as a player, bandleader, composer, producer and entrepreneur with a label, Patois Records, that’s attained national reach. Known as the Doctor for his empathic skills as a producer and educator who has trained and mentored hundreds of musicians, Wallace has almost fully embraced his role as an essential Bay Area figure.

“Maybe I am an elder statesman now,” he says. “It’s kind of funny. I don’t feel that old. I have a big list of things to do.”

In recent years, he’s concentrated on leading the Wayne Wallace Latin Jazz Quintet, featuring pianist Murray Low, percussionist Michael Spiro, bassist David Belove and drummer Paul van Wageningen. It’s the band documented on his latest album, To Hear From There, which follows up on his Grammy-nominated 2009 CD, ¡Bien Bien! Wallace’s trombone work is vivid and expressive throughout, from his spun-butter tone on “In a Sentimental Mood” (interpreted as a bolero) to his burry, rough-and-tumble bomba-ized version of “Freedom Jazz Dance.” But Wallace designed the album as a forum for instrumental conversation, and the musicians use the freedom to engage in a series of charged encounters.

Wallace traces the start of his transition from essential sideman to bandleader back to an NEA grant he received in the early 1990s to write and perform a piece combining African-American influences with Afro-Cuban roots music. The resulting suite, “Digging Up the Roots,” premiered at the Stanford Jazz Festival in 1993. While Wallace didn’t launch his own combo for several years, “That’s what pushed me in that direction,” he recalls. “I was working with friends and I enjoyed it. I had acquired knowledge working with Pete Escovedo and John Santos. I had been writing the whole time, and ‘Digging Up the Roots’ was a natural extension. I felt comfortable stepping forward with my own project and knew I was going to move in that direction.”

He finally stepped forward in 2000 with his first CD, Three in One (Spirit Nectar), a session showcasing his writing skills and encyclopedic knowledge of Afro-Cuban rhythms. The album wasn’t so much groundbreaking as utterly personal, the distillation of years spent soaking up son and salsa, bebop and hip-hop, East Bay grease and descarga release. For Wallace, a San Francisco native, the music naturally reflected the distinctive Latin-jazz sensibility that’s taken root in the Bay Area. It’s a sound shaped by the singular confluence of musicians, and the album features a cross-section of his colleagues in clave. “We have fostered a sound here that’s not New York or Miami,” Wallace says. “It’s a sound that flows from familiarity, from playing together for so many years in so many different situations.”

While Cuban artists such as Jesus Diaz, pianist Omar Sosa and Los Muñequitos de Matanzas percussionist Sandy Perez have arrived in the Bay Area over the years and added a bracing jolt of creative energy, it’s hard to overstate Wallace’s role in the emergence of the Bay Area’s vital Latin-jazz scene. As a featured soloist and arranger in various big bands led by Escovedo in the 1980s and ’90s, he helped hone the percussionist’s populist sound, blending rock and funk with Latin grooves. During the ’90s he also acquired a deep feeling for folkloric Afro-Cuban forms in Conjunto Céspedes, the pioneering West Coast son ensemble. And as a founding member and co-musical director of John Santos’ Machete Ensemble, he was a pillar of the talented band that carried the progressive Latin jazz torch for more than 20 years until Santos disbanded it in 2006. “Wayne’s writing and playing largely defined our sound and direction,” Santos says.

Wallace is driven by his wide-ranging curiosity. When he finds himself in a musical situation in which he feels less than totally grounded, he’ll seek out more information, which is what led him to make several trips to Cuba in the mid-’90s. “My biggest thing is I don’t like to be on the outside of music,” Wallace says. “I got tired of the percussionist having a rhythmic language I didn’t understand. Studying in Cuba really helped me get a greater affinity for the cultural part of the music and to understand the dynamics of it.”

The trombonist has also played an important role in the Asian-American jazz movement, a key component of the Bay Area scene since the early 1980s. He’s collaborated widely with pianist Jon Jang, most recently contributing several exquisite solos on the pianist’s 2006 Asian Improv album Paper Son, Paper Songs. And he has worked extensively with percussionist Anthony Brown, appearing on every Asian American Orchestra recording from 1998’s Big Bands Behind Barbed Wire to 2010’s India & Africa, which also features his incisive arrangement of “Afro Blue.” A bandleader who has who has created a revelatory body of work bringing traditional Asian instruments into jazz contexts to interpret canonical works by Monk, Ellington, Gershwin and Coltrane, Brown says that Wallace is the glue that holds the project together, “the best kept secret of the Bay Area music scene.”

“Arranging is the oil that makes the machine go, but nobody ever sees it,” Wallace says. “Actually, the best analogy is with food. You can have the best ingredients in the world, but if they’re not prepared or seasoned correctly the potential is never realized.”

He launched Patois Records in 2006 with the almost simultaneous release of two very different CDs featuring largely the same cast of players. Where Dedication is a pleasingly eclectic but mostly straight-ahead session, The Reckless Search for Beauty is a versatile, dynamic Latin-jazz concept album inspired by the martyred Spanish poet Garcia Lorca’s essay about duende, the untranslatable word roughly equivalent to soul. For Wallace, duende is the feel that connects African diaspora culture, and The Reckless Search for Beauty ranges widely from Cuba and Brazil to Nigeria and New York City.

That striking variety is evident when Wallace works with other Patois artists as well. Over the past five years he’s produced and released impressive Latin jazz-laced albums by vocalists Kristina, Alexa Weber Morales and Kat Parra, whose fascinating Sephardic Music Experience band sets Ladino lyrics and melodies from medieval Spain, where Jews flourished during Islamic rule, to a variety of Afro-Caribbean rhythms. She introduced the concept on 2008’s acclaimed Patois release Azucar de Amor, and delved headlong into the Sephardic repertoire on 2010’s Dos Amantes. She credits Wallace with providing invaluable assistance throughout the process. “He was a mentor as well as the arranger,” Parra says. “I told him what I wanted to do and he was so amazing in how he guided me. His main theme was, ‘What’s going to tie everything together?'”

For Wallace, growing up in San Francisco in the 1960s meant seeing connections everywhere. He came of age listening to James Brown and Sly Stone, and was a regular at the Fillmore, where promoter Bill Graham showcased the Bay Area rock explosion and the second British Invasion alongside blues legends and jazz stars like Charles Lloyd, Miles Davis and Gary Burton. (Wallace himself has racked up some impressive pop, rock and soul credits, appearing on albums by Aretha Franklin, Santana, Whitney Houston, Boz Scaggs and more.) He earned his union stripes playing with a funk and Top 40 band, the Ambassadors, and quickly graduated to recording with Con Funk Shun and Bad Water Bridge. He cut his teeth at Both/And Club jam sessions led by vibraphone master Bobby Hutcherson, who also gave courses in theory afterwards.

Veteran jazz pros like Bishop Norman Williams, Vernon Alley and Allen Smith also took Wallace under their wings. His ability to read music led to work at the Circle Star Theater, where he became one of the first black musicians in an orchestra that accompanied entertainers like Sammy Davis Jr., Pearl Bailey, Diahann Carroll and the Nicholas Brothers. After majoring in performance at San Francisco State University, where he now teaches, Wallace studied with the great trombonist Julian Priester, who was living in San Francisco along with the rest of Herbie Hancock’s Mwandishi band in the early ’70s.

“He really showed a different side to the J.J. Johnson style of trombone,” Wallace says. “I was really impressed with the fact that he’s one of the few people who ever played with Duke Ellington and Sun Ra. That’s staggering. I’ve always had good role models.”

Wayne Wallace Latin Jazz Quintet
To Hear From There (Patois, 2011)

When you’re on TV, everybody knows you, or at least thinks they know you. Take Kevin Eubanks, who was on NBC’s Tonight Show five nights … END_OF_DOCUMENT_TOKEN_TO_BE_REPLACED

Jimmy Katz leads many lives. He is the preeminent currently active jazz photographer, and has shot more than 200 magazine covers and over 600 recording … END_OF_DOCUMENT_TOKEN_TO_BE_REPLACED

Take a look at Blue Note Records’ release schedule for 2022 and it’s hard to miss the significant percentage of electronic-oriented music. In March, the … END_OF_DOCUMENT_TOKEN_TO_BE_REPLACED