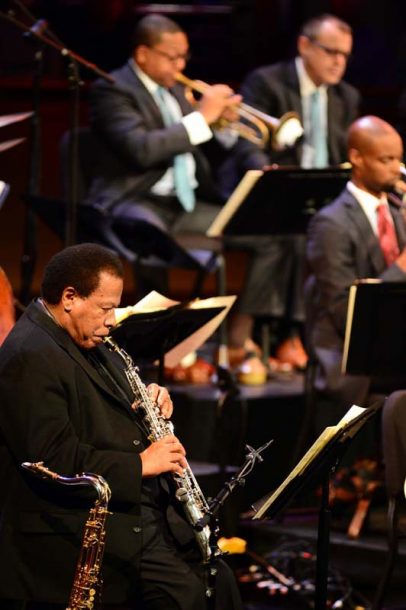 Wayne Shorter with the Jazz at Lincoln Center Orchestra, May 2015

“Musical influence for me,” said Wayne Shorter in an interview from the early 1990s, “came from movies, the way people acted on the screen or the stage. I would think, ‘I want to do something the way Humphrey Bogart did in that movie.'”

His May 14 performance with the Jazz at Lincoln Center Orchestra, the first of three nights at Rose Hall in New York, reminded me of something from a movie, but not an actor’s performance. Shorter’s solos were heard in limited open sections within dense, stylish re-upholsterings of songs from his past. (The arrangements were, following Jazz at Lincoln Center’s usual practice, by members of the orchestra: Wynton Marsalis, Marcus Printup, Sherman Irby and others.) And so during “Teru,” or “Lost” or “E.S.P.,” the mass of sound would break and you’d hear Shorter’s solo, asking grainy and vivid rhetorical questions, not beholden to the predictable flow of things. He acknowledged the chord changes, more or less, sometimes, but generally moved with his own sense of speed and dynamics. He grew quiet or grew loud, but never in a way that said, “Listen, I’m playing quietly now, to amplify the intimacy written into this song,” or “I’ve come back from the abyss, I’m reanimated, I’m surging before the big finale: Do you hear me?” His playing was elusive and gorgeous and embodied. It suggested a creature from another domain.

I am thinking of the animated jaguar shark in Wes Anderson’s The Life Aquatic With Steve Zissou. Anderson makes you wait for it. When it appears, near the end of the movie, it is watched by an audience-Zissou, the oceanographer played by Bill Murray, with his family and crew seated closely around him in a submarine. You see the shark through small portholes, round and square; its patterning is illuminated by the submarine lights. It swims close to the camera’s point of view, opens its mouth and glides over the submarine. It chomps the bait attached to the submarine, drags it for a few seconds, provokes panic and awe and reflection among the crew, and then swims away. It’s got other things to do.

Zissou has wanted to kill the shark. It ate his friend on a previous voyage. But he can’t sustain revenge. He’s looking at a kind of genius of movement, something not to be understood. The shark is so graceful, so dramatically lighted and framed, so close, that it does the job of really good art: It works like a kind of giant mirror. He can’t look at it impartially. He’s with it, he’s of it. “I wonder if it remembers me,” he says.

In his quartet, Shorter acts as a full participant, the improviser in his native element, a vested quarter of the group, improvising at all times whether he’s producing sound or not. This concert felt categorically different: a restricted viewing-of course I mean hearing, but his performance provoked visual associations-of great art in reframed circumstances. Obviously, by definition, it was a more regimented, less spontaneous experience than a Wayne Shorter Quartet concert. But what you were given to hear through those porthole openings-that was beauty.

Guitarist Will Bernard bears the bittersweet blessing of virtuosic skill and eclectic taste, making his music a perpetual delight and yet hard to categorize. Maybe … END_OF_DOCUMENT_TOKEN_TO_BE_REPLACED

At 95, Chicago-based guitarist George Freeman is among the world’s oldest active jazz musicians. Although he came of musical age in the 1940s and counts … END_OF_DOCUMENT_TOKEN_TO_BE_REPLACED

When you’re on TV, everybody knows you, or at least thinks they know you. Take Kevin Eubanks, who was on NBC’s Tonight Show five nights … END_OF_DOCUMENT_TOKEN_TO_BE_REPLACED