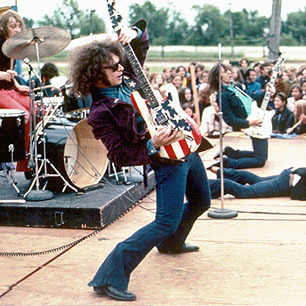 Wayne Kramer in his MC5 days

If any film producers or directors are seeking out new subjects for music biopics, the guitarist, singer and songwriter Wayne Kramer has stories worth telling. There’s the obvious narrative-how Kramer and a crew of Midwestern radicals, under the tutelage of poet-manager John Sinclair, kicked out the jams and laid the groundwork for punk rock as the MC5. Over the past six years, there’s been a storyline about Kramer’s non-profit, Jail Guitar Doors USA, which offers guitars and lessons to inmates in more than 50 U.S. prisons. And there’s another tale of how he jammed in a correctional facility himself, in a band with a genuine bebop legend. “When I was in prison and I played music,” says Kramer, 66, on the phone from his Los Angeles studio, “I wasn’t in prison anymore. I was in the world of melodies and chord changes.”

By 1975 the MC5 had imploded and Kramer was up to no good. After getting popped for attempting to sell cocaine to undercover law enforcement, he was sent for two years to the Federal Medical Center in Lexington, Ky.-the storied “Narcotic Farm” that blueprinted substance-abuse punishment and rehabilitation in America. There he met Red Rodney, the trumpeter who followed Miles Davis in Charlie Parker’s band. He was serving one of his life’s many drug-related incarcerations, and stopped by Kramer’s cell one day with his horn and a fake book. Rodney had thoroughly rebuilt his technique after a run-in with police over a decade prior damaged his embouchure; Kramer, however, struggled with the first chart. “I’m sure I was butchering the changes,” he recalls. “But when we finished, Red said, ‘Yeah, alright, you can play pretty well.’ And then he opened up to me and we became friends and he became my mentor and my musical father.”

Rodney isn’t the only master trumpet player Kramer has enjoyed a deep and enduring bond with. The guitarist met the late Charles Moore in 1967 via Sinclair, one of Moore’s colleagues in the avant-garde incubator known as the Detroit Artists’ Workshop. For the heady scene that coalesced around the Wayne State University campus, a general spirit of artistic and political liberation trumped boundaries of race or idiom. “We were all the same people,” Kramer says of the jazz and rock communities. “We all lived in the same ghetto apartments; we lived in the same neighborhoods.” Moore, who’d go on to cofound the influential Strata Records label, collaborate with Yusef Lateef and earn a doctorate in ethnomusicology from UCLA, became the MC5’s musical director of sorts when a gig or project called for a horn section, and he can be heard on flugelhorn on the band’s 1971 album High Time.

Kramer moved to L.A. in 1994, and found his “welcoming committee” in Moore, who’d migrated west in the ’70s. Their relationship crested not long before Moore’s death of a heart attack in May of this year. Earlier last spring, Kramer released Lexington (Industrial Amusement), a collection of eight compositions written with Moore and performed by the “Lexington Arts Ensemble” featuring Kramer on guitar and heavyweights like trombonist Phil Ranelin, bassist Robert Hurst and rising piano star Tigran Hamasyan, who studied with Moore. Though it was conceived as score for a documentary on the Narcotic Farm, Lexington is programmed like any engaging current jazz record. Perhaps most impressive, Kramer sounds like himself, in all his wailing-Stratocaster glory, while the music maintains its footing in the groove-savvy, inside-outside ’60s avant-garde.

To put it another way, Lexington feels closer to Impulse!, Sonny Sharrock and Ornette’s Prime Time than to anything you’d call fusion-much of which, Kramer says, “had no sex drive.” The record reflects Kramer’s Detroit-bred affinity for energy and conviction in music; in the ’60s, he saw the more visceral strains of free jazz as something to aspire to after mastering the fundamentals of rock guitar. “If Hendrix hadn’t died and Trane hadn’t died and Albert Ayler hadn’t died all around the same time-and, you know, the MC5 had survived being in the music business-we’d all be listening to some different music today,” he says with a laugh. “That’s all speculation of course.”

At 95, Chicago-based guitarist George Freeman is among the world’s oldest active jazz musicians. Although he came of musical age in the 1940s and counts … END_OF_DOCUMENT_TOKEN_TO_BE_REPLACED

When you’re on TV, everybody knows you, or at least thinks they know you. Take Kevin Eubanks, who was on NBC’s Tonight Show five nights … END_OF_DOCUMENT_TOKEN_TO_BE_REPLACED

Jimmy Katz leads many lives. He is the preeminent currently active jazz photographer, and has shot more than 200 magazine covers and over 600 recording … END_OF_DOCUMENT_TOKEN_TO_BE_REPLACED