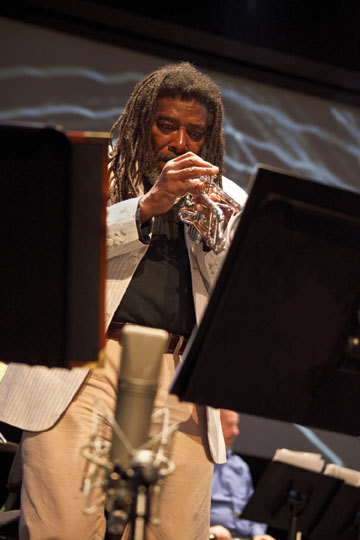 Turning 70 years old would be a milestone in anyone’s life, but as Wadada Leo Smith celebrated that occasion last December, he realized he’d validated his life’s work. “Being able to make art at 70 tells you that you were definitely right when you were 20-something years old,” says the trumpeter and composer, who marked his birthday with performances by all four of his working ensembles at Roulette in Brooklyn. “Seventy tells you that in those early years you started out on the right course and that you’ve moved through life on the right path.”

Achieving that landmark also, Smith says, places him in the company of other composers who have sustained their artistic vigor into what many would consider their retirement years. He rattles off a list of names including Ellington, Stravinsky, Ornette Coleman, Janáček and Smith’s old comrade from the AACM, Muhal Richard Abrams. “To still be able to play the trumpet strong, to still be creative and writing music, I think that puts me in the range of those guys,” he says. “They’ve all maintained their creativity straight on across.”

Perhaps the strongest evidence that Smith has not only maintained his creativity after seven decades but is enjoying one of the most inventive periods of his life can be found in Ten Freedom Summers, his epic masterwork exploring the civil-rights movement from 1954 to 1964. Composed over half of his lifetime, the 19-piece suite was premiered last October in Los Angeles and is now available on a four-CD set from Cuneiform.

The sprawling, vigorous work combines Smith’s Golden Quartet and Quintet (drummers Pheeroan akLaff and Susie Ibarra alternate or work in tandem) with the nine-piece Southwest Chamber Music under the baton of Jeff von der Schmidt. Some sections are written exclusively for one of the ensembles; others combine them in different ways. Mournful blues collide with jagged abstractions; the leader’s bold horn prompts scything lines from Anthony Davis’ piano, shredding lithe flute and string melodies. The sweep and drama assert Smith’s stark emotional reaction to one of the country’s most contentious periods. “I looked at the psychological impact that this movement had on America, and I tried to convey it through cultural means,” Smith explains. “The music is not programmatic; it’s actually more expressionistic. I’m trying to reflect what went on in society and the role it played in building the American psyche.”

Though one of the pieces was penned in 1977 for the late violinist Leroy Jenkins and several others were written in the years since, the majority of Ten Freedom Summers was composed over the last few years with the intent of shaping it into a complete work. As models, Smith took into consideration Duke Ellington’s Sacred Concerts, classical pieces by composers like Stravinsky and Toru Takemitsu, and August Wilson’s Pittsburgh Cycle, 10 plays tracing the African-American experience through a century in a single neighborhood.

Though the titles of Ten Freedom Summers reflect the major figures and events of the era, Smith was a young man at the time, and inevitably his own experiences affected the shape and emotion of the work. “When Emmett Till was killed, he was about the same age as I was,” Smith says. “He was killed less than 30 miles from where I lived and grew up. I watched people in the military who were against JFK dance when he was assassinated. I had people abuse me just like they did everybody else. So the experience is direct. It’s not across the country or across the world; it comes directly from my own life.”

That life took Smith from Leland, Miss., to studies of music from a variety of cultures and early, integral membership in the nascent AACM. His visionary approach to composition has resulted in the development of Ankhrasmation, a unique musical language that combines his ideas about composition and improvisation with image-based notation inspired by hieroglyphics.

Massive though it is, Ten Freedom Summers is only one of several recent releases from the prolific trumpeter. Last year, he released Dark Lady of the Sonnets with his Mbira trio featuring akLaff and pipa player and vocalist Min Xiao-Fen, in addition to Heart’s Reflections, a monumental double-disc session with his large electric ensemble, Organic. Before that came The Blue Mountain’s Sun Drummer , a duo set with Ed Blackwell recorded in 1986.

Smith often works in tandem with drummers. He has collaborated in duo with everyone from Jack DeJohnette to Hamid Drake, and has an upcoming release with Louis Moholo-Moholo in the can. “It goes back to the early days of African-American culture,” Smith says, “when brass bands and marches played a powerful role in everyday life as well as spiritual life. When I was a kid, in my 12th or 13th year, I played many soldiers into the ground for their burial rites. So that trumpet-and-drum relationship is really one that for me is almost perfect.”

He also continues to work with his Silver Orchestra, a large ensemble, and the Golden Quartet or (more often these days) Quintet, which has served as his chief outlet since its formation in 2000. The personnel has changed several times and has included DeJohnette, Malachi Favors, Vijay Iyer and Ronald Shannon Jackson at various points. The idea was to form a group consisting of composer-performers who were all leaders in their own right, who understood from experience what goes into creating a successful unit. The current line-up consists of Davis, Ibarra, akLaff and bassist John Lindberg.

Though he’ll undoubtedly maintain the variety and scope of his output given those four diverse and ongoing ensembles, Smith wants to continue performing Ten Freedom Summers in the years to come. “It’s taken half my life to create,” he says, “and I don’t feel like sitting it on the shelf.”

OK, that’s funny, but it also implies a problem. People who dismiss the accordion as soon as they hear it, as soon as it triggers … END_OF_DOCUMENT_TOKEN_TO_BE_REPLACED