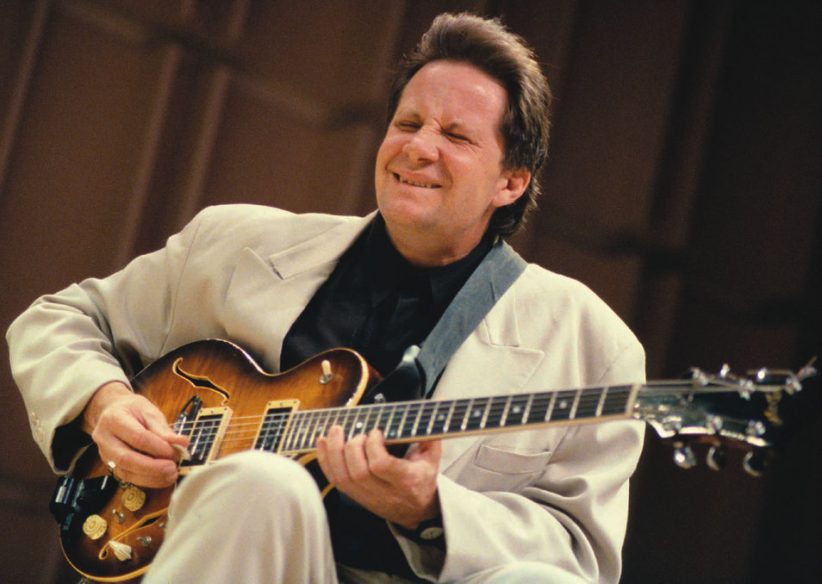 Without much fanfare, guitarist Vic Juris has been accumulating an impressive body of recorded work over the past nine years for SteepleChase that showcases his flowing, warm-toned, bop-inflected lyricism and his penchant for unbridled swinging. Following a string of urgent postboppish releases during the ’70s for Muse—(Roadsong, Horizon Drive and Bleecker Street), Juris laid out as a leader during the ’80s, but he returned to action in 1994 with his SteepleChase debut, Night Tripper. A recent flurry of activity for SteepleChase—an intimate and highly interactive duo project with pianist Marc Copland called Double Play; a key sideman role on bassist Steve LaSpina’s The Bounce; his own Songbook 2 standards project with bassist Michael Formanek and drummer Jeff Hirshfield, as well as an upcoming guitar summit with labelmates Dave Stryker and Tony Purrone—promises to keep Juris’ profile high among six-string connoisseurs.

A native of Jersey City, N.J., Juris took up guitar at age 10 during the summer of 1963. Accordion, he notes, was a far more popular instrument than guitar at that time. All that would change the following year when Beatlemania washed up on the Jersey shore. Juris got his first electric guitar on Christmas of 1964, and by the mid-’60s he was playing cover versions of Jimi Hendrix, Cream and the Temptations material in rock and R&B bands around his area. He discovered jazz in his late teens and subsequently studied with Philly jazz guitar legend Pat Martino.

In 1975, Juris made his recording debut on alto saxophonist Eric Kloss’ Bodies’ Warmth (Muse). He later gigged with fusioneer Barry Miles before hooking up with alto-sax burner Richie Cole, appearing on two hot, boppish offerings in 1977’s Alto Madness and 1978’s Keeper of the Flame (both on Muse). In the early ’80s, Juris immersed himself in acoustic guitar, performing duets with Larry Coryell and Biréli Lagrène, and by the late ’80s he joined bassist Gary Peacock’s group.

For the past 10 years Juris has been hitting the road hard with the Dave Liebman Group. “The band started out where we had keyboards,” says Juris, “and then Dave decided that he just wanted to go with the guitar. So my original role was kind of like a second horn, and the guitar is very cool for that. But now that’s completely changed to where I’m more of a colorist and chordal accompanist while also doing a bit of the second horn thing.”

The Liebman gig affords Juris quite a bit of freedom. “Dave is into doing a wide variety of stuff and he pretty much gives me the green light to do whatever I want,” says Juris. “He likes the fact that I can go through different styles in a given set and he also likes the effects for some of the electric Miles stuff that we do [culled from On the Corner, Get Up With It and Dark Magus, all recordings made during Liebman’s tenure with the tumultuous Miles Davis bands of the early ’70s]. So I carry a RAT pedal for a touch of distortion and I also use my Roland GR-50 guitar synth for colors and textures on some tunes. We also do some Jobim music in that band [from Liebman’s GMN.com recording, The Unknown Jobim], so he likes me to play the nylon-string acoustic on that stuff.”

Juris uses a nylon-string Takamine acoustic guitar for the Brazilian music, but his main ax since 1980 has been a thin hollow-body guitar made by New Jersey luthier Tom Doyle. He also plays a closed archtop (no f-holes) built by Phoenix luthier Glen McKerrihan.

Songbook 2 highlights the formidable chopsmeister stretching out on familiar vehicles like John Lewis’ “Django,” John Coltrane’s “Giant Steps,” Scott LaFaro’s “Gloria’s Step” and Barney Kessel’s “Swedish Pastry.” But his most challenging project thus far is his remarkable 2000 homage Remembering Eric Dolphy (SteepleChase). “I got interested in Dolphy’s music in high school,” Juris says. “Somewhere in the late ’60s I was exposed to a Dolphy piece entitled ‘Iron Man’ and I felt that this was the most fantastic thing I ever heard. Dolphy, to me, was the Hendrix of the saxophone. But what I found in doing this tribute project is that Dolphy’s music doesn’t fall so easily on the guitar. The wide intervals he uses are pretty tough to execute on guitar. Some of those tunes, like ‘Miss Ann’ and ‘Out There,’ were real finger-busters. So for that project I decided to use four Dolphy pieces and then write some originals that were strictly Dolphy-influenced. And I got [alto saxophonist] Dick Oatts to interpret all the Dolphy parts beautifully.”

When you’re on TV, everybody knows you, or at least thinks they know you. Take Kevin Eubanks, who was on NBC’s Tonight Show five nights … END_OF_DOCUMENT_TOKEN_TO_BE_REPLACED

Jimmy Katz leads many lives. He is the preeminent currently active jazz photographer, and has shot more than 200 magazine covers and over 600 recording … END_OF_DOCUMENT_TOKEN_TO_BE_REPLACED

Take a look at Blue Note Records’ release schedule for 2022 and it’s hard to miss the significant percentage of electronic-oriented music. In March, the … END_OF_DOCUMENT_TOKEN_TO_BE_REPLACED