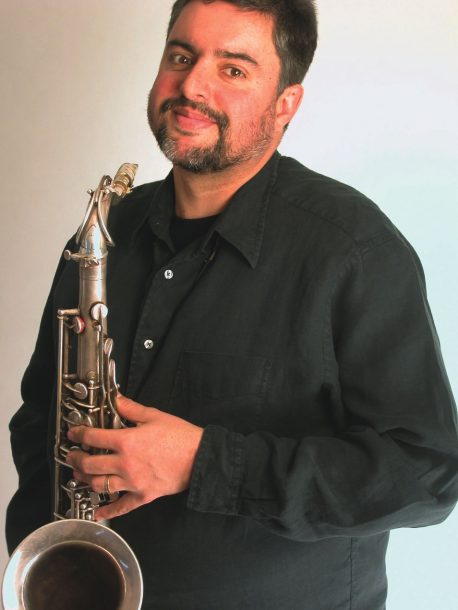 On Jan. 12, his 49th birthday, saxophonist Tony Malaby played an unruly set with his Tuba Trio at Winter Jazzfest in New York. Joined by Dan Peck on tuba and John Hollenbeck on drums, percussion and keyboards, Malaby burned brightly, leaning into phrases with gestures from the elbow and shoulder, wringing a twisted beauty from the tenor as he held it aloft. The lusty audience response seemed to register that a hero of today’s improvised music scene was on the stage.

The buzz started around 2000, when Malaby debuted with Sabino and drew sweaty capacity crowds to his gigs at the Internet Café in the East Village. Since then Malaby has led one adventurous group after another, including the two-drummer Apparitions unit, the Cello Trio, the gorgeous and harrowing Novela nonet and the Tamarindo trio with bassist William Parker and drummer Nasheet Waits.

In mid-March, Malaby filled the Cornelia Street Café to the rafters for two sets with a newer project, the Reading Band. Featuring trumpeter Ralph Alessi, bassist Drew Gress and drummer Billy Drummond, this quartet is about Malaby’s desire “to have a band that doesn’t rehearse,” he says. “I decided to try this, where I bring random things and we just perform them on the stage. We’re living in a time when everything is so overwritten. Everyone is playing such hard music, man, practicing with their computers just to be able to deal on these forms and all the metric stuff. I’m just a throwback. I’m such an emotional player, and I think one of my strengths is intuition.”

Born and raised in Tucson, Ariz., Malaby is a first-generation Mexican-American (a fact reflected in many of his Spanish song titles). In 1990, he headed north to attend Alberta’s Banff International Workshop in Jazz and Creative Music, where his instructors included bassist Rufus Reid. (Malaby’s fellow Banff students that summer included Alessi, pianists Ethan Iverson and Andy Milne, saxophonist Seamus Blake and many others.) At Reid’s behest, Malaby then traveled east to attend William Paterson University in New Jersey. “That was the first time I was close to New York,” Malaby says. “My first big touring project was with Joey DeFrancesco. I hooked up with the Mingus Big Band. I did a Marty Ehrlich gig with Michael Formanek and Tom Rainey. A lot of important seeds were planted then.”

Remembering the initial rehearsal with Ehrlich, drummer Rainey shares, “The first sound we heard from Tony’s horn, Mike and I looked at each other and knew that this was a unique and special voice.”

Malaby headed west again, taught for three years in Tempe, Ariz., then returned to New York in 1995 with a companion-Sanchez. The two got married and stayed together for 17 years. Although the divorce came a few years ago, Malaby and Sanchez still live across the street from one another in Jersey City, where they’re raising their 8-year-old son, Jack, and collaborating on music. A third album by the celebrated Malaby-Sanchez-Rainey trio is due out on Clean Feed later in 2013.

Looking at what’s around the bend, Malaby says, “I’m having a cello year. I’ve been doing all these cello projects and it’s great. I love that instrument-it’s so close to the tenor but so different. I’ve been playing a lot with Chris Hoffman [cellist in Henry Threadgill’s Zooid], and I think for my next record I’m going to combine both worlds of the cello and the tuba, so it’s going to be the Tuba Trio with Chris Hoffman. We’ve got a big festival and tour in November and then I plan to record at the end of this year.”

“When we moved to New York,” says Sanchez, “Tony and I got involved in playing what I guess people call free music, though for me it’s all music.” Malaby has the same outlook, as someone who’s evolved a highly abstract approach from an impeccable foundation of harmonic knowledge and chops. “My memory of Tony [at Banff] in 1990,” Alessi remarks, “is that he sounded like a really good, mature jazz saxophonist. But the personalized side to his playing, the artistic thing that he would develop in such a strong way, I think happened later. When I reconnected with him, I really noticed that change.”

As Sanchez puts it, “Tony has an uncanny ability to make the tenor saxophone sound like a whole jungle.” He’s also continually responding to the sounds of others-things so unexpected as Andrea Parkins’ accordion on Hammered by Ches Smith, or Jacob Sacks’ harpsichord on Overseas IV by Eivind Opsvik. Sideman encounters like these, Malaby says, “have contributed to my direction so much, more than anything. It really keeps me inspired, wanting to practice and go deeper.”

Even when he’s going for broke, summoning the whole jungle in post-Ayler fashion, Malaby is drawing from a discipline of tone production that requires sustained and conscious work. “The stuff that I’m doing with a lot of my bands, it’s really not free,” he maintains. “There’s a lot of thought and construction that’s gone into creating this type of language.”

His deep focus on texture began, he recalls, in the period following his 1995 return to New York: “In my practicing I took on a type of visualization approach, where I tried to be bamboo flute-like, or take on double-reed qualities like English horns and bassoons, or visualize playing with an acre of cellists. I want to keep building from that, so I do sound studies every day, and really try to maintain that flexibility. When you’re in the heat of the moment, what can you do? Which way can you take the sound?”

When you’re on TV, everybody knows you, or at least thinks they know you. Take Kevin Eubanks, who was on NBC’s Tonight Show five nights … END_OF_DOCUMENT_TOKEN_TO_BE_REPLACED

Jimmy Katz leads many lives. He is the preeminent currently active jazz photographer, and has shot more than 200 magazine covers and over 600 recording … END_OF_DOCUMENT_TOKEN_TO_BE_REPLACED

Take a look at Blue Note Records’ release schedule for 2022 and it’s hard to miss the significant percentage of electronic-oriented music. In March, the … END_OF_DOCUMENT_TOKEN_TO_BE_REPLACED