Skip to content
Become a member and get exclusive access to articles, live sessions and more!
Start Your Free Trial
Home > Features > Tomeka Reid: Story of Her Life 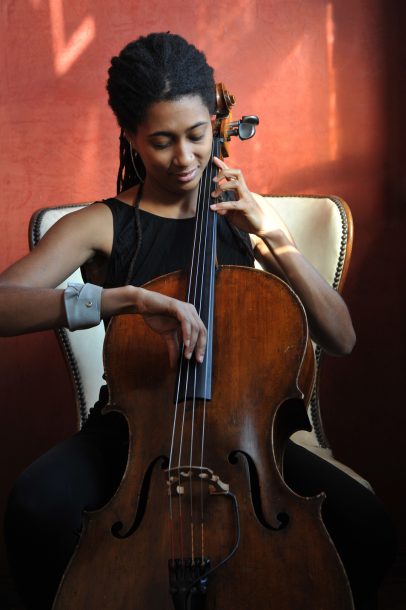 The cover art of Chicago-based cellist Tomeka Reid’s new release on Thirsty Ear, Tomeka Reid Quartet, her debut as a leader, portrays a young girl bathed in light, apparently either dancing or running through a thicket of trees and undergrowth toward the light’s source. It seems as if she’s found herself in a land of enchantment whose wonders she can apprehend only if she forges ahead-serendipity, toughened by determination.

To hear Reid tell it, that’s also pretty much the story of her life in music. She was born in 1977, grew up in the Washington, D.C., area and chose the cello in the fourth grade. For a long time, her focus was on classical music. It wasn’t until her senior year at the University of Maryland, College Park, that a mentor “encouraged me to do some improvisations.” Even then, though, “I still was kind of on the fence about it. I wanted to do it, but I wasn’t committed; I felt that I had a lot to learn in classical music. I wasn’t sure about it, [but] I kept doing it.”

Years earlier, she’d visited Chicago with her family and was smitten; during college, she visited a few more times. “I [eventually] stayed here for a summer,” she recalls over coffee on Chicago’s South Side. “That’s when I met [flutist] Nicole [Mitchell] in a symphony. It was called the Classical Symphony Orchestra. Playing in orchestras, I was usually the only black person, so it was like, ‘Whaat?’ There were three! Her, Sam Williams playing violin and Kharma Foucher played the cello. I wasn’t the only one! I said, ‘Oh, my gosh, I want to move here.’ I think within five days of graduating [in 2000], I took the Greyhound and moved out here.”

Reid had grown up listening to mainstream popular music as well as classical, and in college she’d begun to delve into jazz. Nonetheless, she says, she’d never anticipated anything like the depth and richness she discovered in Chicago after re-establishing her friendship with Mitchell, who by then was an ascendant figure in the community of improvisers centered on the AACM. “It wasn’t intentional,” she asserts. “It’s kind of like the universe just [said], ‘You need to go in this direction.’ I didn’t know about the AACM before I moved here. I just knew I wanted to move to Chicago because I wanted to be around more black musicians. I was just kind of drawn into it.”

It certainly didn’t take her long to catch up. As a member of Mitchell’s Black Earth Ensemble, she learned to free her muse and abandon her inhibitions. (“Just make some sounds!” Mitchell instructed.) She eventually joined other exploratory and challenging groups: vocalist Dee Alexander’s Evolution Ensemble, drummer Mike Reed’s Loose Assembly and Living by Lanterns, and the AACM’s Great Black Music Ensemble, among others. In 2010, Anthony Braxton enlisted her in his Tri-Centric Orchestra to record Trillium E, part of his ongoing operatic cycle, and she worked in Braxton’s Falling River Music nonet in 2014. Today, she fronts her own Chicago-based unit and co-leads the cello/violin/double-bass trio Hear in Now. With Mitchell and drummer Mike Reed, she released the acclaimed Artifacts last year on the 482 Music label. As a composer, she has garnered commissions from the AACM, the Chicago Jazz Festival and the Chicago Jazz Ensemble.

Reflecting her musical trajectory, the new CD came together as a result of disparate elements that congealed at the appropriate time. “Some of these compositions,” she notes, “were written two and a half, maybe three years ago. [All except one, Eric Dolphy’s “17 West,” are Reid originals.] It’s something I’ve talked about with female leaders I’ve worked with. Every time, [they’ve said,] ‘You should get yourself out there. You write good music.'”

Produced by Mike Reed, the disc features Reid with guitarist Mary Halvorson, bassist Jason Roebke and drummer Tomas Fujiwara. Even on arco passages, Reid achieves a timbral intensity and rhythmic thrust of the kind usually associated with electrified jazz fusion. She and Roebke interweave, tossing solos and accompaniments back and forth, alternating lower- and higher-register pizzicato runs and bowed lines. Halvorson, like Fujiwara, summons emotional fervor through understatement rather than declamation; her leads and comping simmer with unforced brio. The musical and emotional spectrum is luminous, not unlike that mystical light illuminating the landscape for the journeying girl on the cover.

“I was drawing upon all the influences I’ve been exposed to here,” Reid affirms. “I really like free playing, but I still love melodic things. I didn’t want to shy away from anything.” She emphasizes that the electronic-like edginess spiking her sound is intentional-she’s determined to challenge the stereotype of the cello as a “mellow” instrument. “It sounds beautiful, but the cello can also do so many other things-even though I still feel, when I listen back, like, ‘Ahh! There’s a lot of mellowness in there!’ So I’m trying to go even more away from that. That’s one of the beauties of playing a string instrument: You can bend, you can slide, you can get these glass qualities, you can get all these different qualities that I still don’t feel I’ve fully explored. I’m still uncovering.”

Tenor saxophonist Julieta Eugenio was recently reminded of the distinct pleasure one can derive from masters of her chosen instrument. While cooking at home and … END_OF_DOCUMENT_TOKEN_TO_BE_REPLACED

Everything about Israeli-born tenor and soprano saxophonist Eli Degibri is a celebration. You can hear that in his sideman gigs with Herbie Hancock and Al … END_OF_DOCUMENT_TOKEN_TO_BE_REPLACED

It’s a cold March Friday night in New York City, but the crowd inside the Village Vanguard crackles with warmth as it engages with the … END_OF_DOCUMENT_TOKEN_TO_BE_REPLACED

When you hear tenor saxophonist Mark Turner’s name in conversation, it seems to be frequently linked to the notions of mindfulness, precision, and fastidiousness. “That … END_OF_DOCUMENT_TOKEN_TO_BE_REPLACED