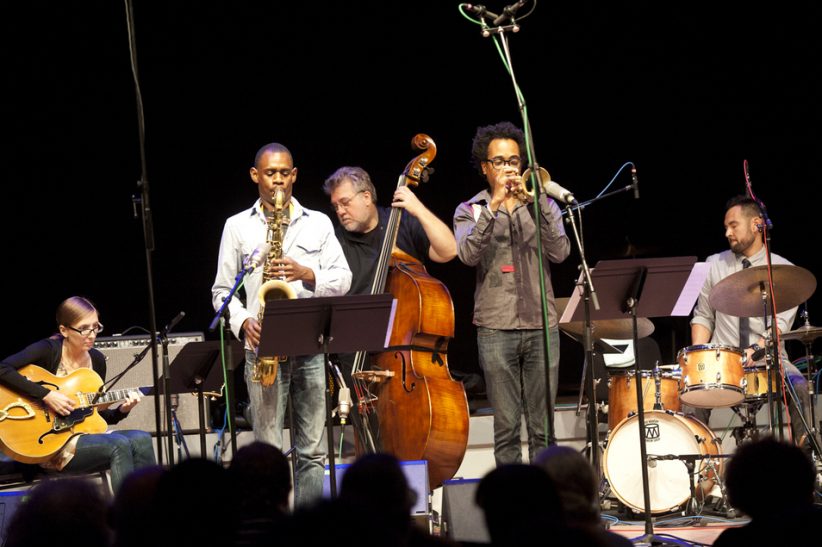 When drummer Tomas Fujiwara composed “The Comb,” a free-floating polyrhythmic dirge from After All Is Said (482), his arresting third album with the Hook Up, he channeled the story of his Iranian step-grandfather’s final days and execution under the Shah, encapsulated in a tool found in every barbershop. Taking a cue from Wayne Shorter, Fujiwara often composes soundtracks to cinematic scenes, but he prefers to obfuscate the underlying narrative and allow the listener to fill in the visual imagery.

“It was a free flow of thoughts and emotions, creating these different sections and then seeing how they fit together, but not being too heavy-handed in doing that,” says the 38-year-old drummer, seated at his apartment in Brooklyn’s Fort Greene neighborhood. “It’s almost like how one thought pops into our brain and another thought pops into our brain, and if you lay them out on paper it might not make sense, but that’s how our minds and emotions work. They just kind of flow.” This strategy informs both Fujiwara’s percussion style and his approach to the album’s series of tone haiku, blending a foundation of technical facility with an economy of language and a taste for experimentation. For Tomas Fujiwara (the “s” in Tomas is silent), opacity creates more interpretive possibilities than limitations.

Compared with Actionspeak (2010) or The Air Is Different (2012), the Hook Up’s well-received previous releases, After All Is Said more fully realizes Fujiwara’s cinematic landscapes, which might be the benefit of time: Each composition was honed extensively in live performance, and harmonically layered through the rich interplay of guitarist Mary Halvorson, tenor saxophonist Brian Settles, who plays flute for the first time on a Hook Up album, trumpeter Jonathan Finlayson and bassist Michael Formanek, who joined the group in 2012.

Fujiwara’s reluctance to include resolutions in his work also guides the elliptical “When,” a highlight of After All Is Said, which hinges on a deft use of melodic and rhythmic repetition. The clustered ostinato of Halvorson’s searing solo introduction at once recalls Nirvana and Anthony Braxton. Fujiwara composed the piece at the piano, but Halvorson imbues it with a stylistic flair and motivic improvisation that makes it her own. Halvorson responded so strongly to “When” that she included it on Meltframe, her recent solo guitar album, reinvigorating a saturated subgenre with her signature angular attack. “It’s such a melodic song, and there are so many rich layers of harmony happening that I felt like it was really intuitive to do a solo introduction on,” she says.

For his part, Fujiwara stretches out on two solo drum introductions, on “For Tom and Gerald”-for drummers Rainey and Cleaver, respectively-and “Solar Wind,” demonstrating a mastery of rhythmic development and intonation that owes a debt to Max Roach, an early influence. “My folks had this crate of records. I was just bored and flipping through them, and I came across Rich Versus Roach, Fujiwara says of the 1959 Max Roach-Buddy Rich collaboration. “I put it on, and as soon as they started trading, and specifically Max Roach’s hi-hat work, that was it.”

Growing up in the Boston suburbs, Fujiwara received his first drum set for his 10th birthday. That year, he began studying with legendary percussionist Alan Dawson, who had taught several generations of drummers, from Tony Williams to Terri Lyne Carrington. “If [each lesson] was a meal, it had all the food groups and the proper servings of each,” says Fujiwara. “The way he moved around the kit was so fluid and graceful, it was like watching a dancer on the drums.” Fujiwara studied with Dawson until he graduated from high school and moved to New York. He continues to practice Dawson’s famed “Rudimental Ritual” three times a day.

When he was 15, Fujiwara met cornetist Taylor Ho Bynum, currently the executive director of Anthony Braxton’s Tri-Centric Foundation, who lived in a neighboring town. “Taylor worked in an ice cream shop and had a regular gig there, and he paid us in ice cream,” Fujiwara says. They reconnected in New York, and have since collaborated as a duo, in Bynum’s sextet and in Mike Reed and Jason Adasiewicz’s Living by Lanterns. “One of the things that’s hard to find is a drummer who so intuitively understands dynamics, is so fluent in so may different fields and plays with that kind of compositional intent and sensitivity,” Ho Bynum says. “One of my fallbacks as a composer is to write some music, and then say to Tomas, ‘Make it better than it is,’ and he inevitably does.”

Fujiwara has lent that sensitivity to a wide array of projects: his own trio with trumpeter Ralph Alessi and guitarist Brandon Seabrook, and groups led by Formanek, Halvorson, Matana Roberts and Tomeka Reid, as well as Josh Sinton’s Ideal Bread and Day in Pictures, led by Arcade Fire’s Matt Bauder. In 2013, Fujiwara collaborated with Anthony Braxton and Tom Rainey on Trio (New Haven). Thumbscrew, Fujiwara’s free-improvisation trio with Halvorson and Formanek, recently recorded their forthcoming sophomore album during a two-week residency at City of Asylum, the Pittsburgh arts collective that provides a sanctuary for political exiles.

Yet regardless of the musical context, Fujiwara never abandons the fundamentals. “For me, a lot of the concepts stay the same across different playing situations-time, pulse, groove, sound, color, texture, momentum, dynamics, contrasting, supporting-but how I approach them changes,” Fujiwara says. “It’s like the saying goes, with freedom comes responsibility, so the more freedom you have, I don’t want to take that as license to throw out any sense of structure or form.”

When you’re on TV, everybody knows you, or at least thinks they know you. Take Kevin Eubanks, who was on NBC’s Tonight Show five nights … END_OF_DOCUMENT_TOKEN_TO_BE_REPLACED

Jimmy Katz leads many lives. He is the preeminent currently active jazz photographer, and has shot more than 200 magazine covers and over 600 recording … END_OF_DOCUMENT_TOKEN_TO_BE_REPLACED

Take a look at Blue Note Records’ release schedule for 2022 and it’s hard to miss the significant percentage of electronic-oriented music. In March, the … END_OF_DOCUMENT_TOKEN_TO_BE_REPLACED