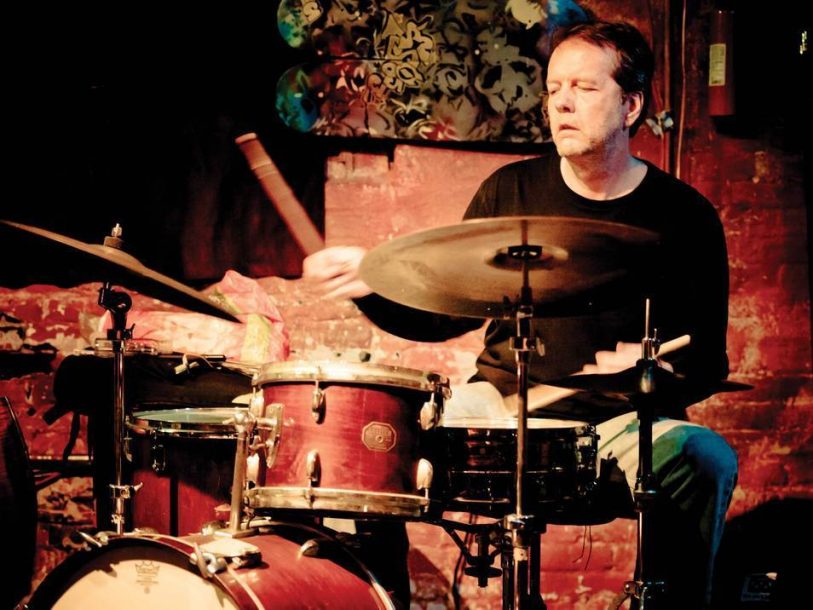 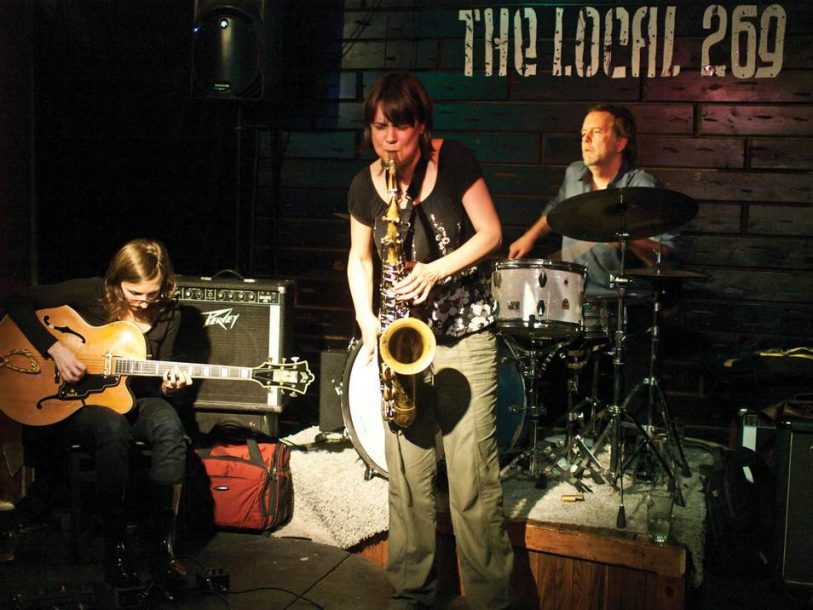 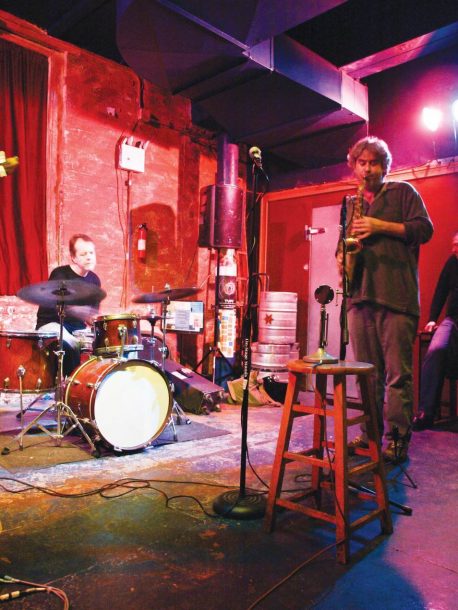 Leader albums in jazz are generally considered a welcome thing. Most flavor-of-the-month phenom musicians, whether they’re actually ready to lead a session or not, have no problem recording in the spotlight.

At an opposing end is 53-year-old drummer Tom Rainey, who falls more in line with jazz’s great but waning journeyman tradition. He’s spent three decades collaborating with the likes of Tim Berne, Kenny Werner and Fred Hersch, but only recently released his first album as a bandleader, Pool School (Clean Feed). “I am a very reluctant leader,” Rainey admits. “I’m really happy to have done it and I’m proud of it, but I came to it kicking and screaming.”

As could be expected, the line-up on Pool School isn’t studded with guest stars and returned favors by marquee names. Rather, it’s a straightforward trio date with two young, rising stars: guitarist Mary Halvorson and saxophonist Ingrid Laubrock. The contents are devoid of epic workouts designed to show off every trick in the drummer’s arsenal, consisting instead of 12 brief, focused statements.

Asked why he’s finally taken his place at center stage after decades of sticking to supporting roles, Rainey simply shrugs and jokes, “I’m not the most highly motivated person in the world, I guess.”

The more serious reason isn’t a lack of motivation but a dearth of necessity. After all, while the new CD vividly showcases his nuanced, coloristic style, the same could be said for any of his several long-term collaborations-bands led by Berne, Werner, Hersch, Ted Curson, Tony Malaby and Angelica Sanchez, and Jane Ira Bloom. “All the bands I’m in, I have a lot of latitude and a lot of creative freedom,” he says, “so it never really seemed necessary to have my own band.”

Rainey never argues that Pool School came about because that need had finally arisen, simply that the circumstances finally seemed right. One major factor was the arrival of Laubrock as a major partner in his professional and personal life. (At this writing, the two are planning to be married in early October.) “Ingrid and I have been getting together and improvising with different people,” Rainey explains. “A lot of things have taken off, but when we played with Mary I said, ‘Maybe I’ll co-opt this and do something with this band.’ We went into the studio and played music for an afternoon, and the only real responsibility I took other than setting it up was to have to wade through all the pieces and decide which ones I wanted to put on the record. It was all kind of easy-meaning, I think, it was the right time. All the pieces fell into place.”

The dozen pieces that ended up on Pool School were entirely improvised, with no direction from the leader and no editing after the fact. That comes as something of a surprise, given the concision and focus of each piece, most of which fall in the four-to-six-minute range. “I tried to get down to the pieces that had a distinct personality,” Rainey says of the selection process. “The ones that sounded most composed to me were the ones I ended up choosing. It felt like I made the record I wanted to make without having any idea what that should be.”

Perhaps Rainey’s nonchalance can be attributed to how playing drums is something that has simply always been a part of his life. Born in Los Angeles in 1957, he was raised by his mother in Santa Barbara after his parents split up, but his father had already started him on the drums. “As long as I can remember, I always had a pair of drumsticks in my hands,” Rainey says. “My father wasn’t a professional, but when I was a little kid I thought he was the best drummer in the world. He taught me the rudiments.”

Rainey also inherited his earliest idols from his father. “The first guy that I remember noticing was Gene Krupa,” he says, “because that was my dad’s favorite drummer. I adopted him, like if your father said Ted Williams is the best hitter in baseball, you go, ‘Oh yeah, Ted Williams is my guy too.’ Then I heard the drum battle with Buddy Rich and I started going, ‘Hmm, I don’t know, Buddy might have some shit.'”

Before the age of 10, Rainey was marching in parades with the local Boys Club drum corps, and through his teenage years he played in school bands by day and gigged at dances with his rock band at night. “The Top 40 back then was really good,” he recalls. “As a drummer you could get to a lot of different stuff because they weren’t all the same beats. It was really varied, everything from Tower of Power to Santana to the Doobie Brothers, Steely Dan, Chicago.”

At the same time he was immersed in the pop music of the day, Rainey took a contrarian interest in the genre that he would end up pursuing most intently. “At some point I just decided that I wanted to be into jazz,” he says. “I think mostly because nobody else was. I also used to go to this day camp in the summer, and one of the counselors was really into jazz. He was probably just a college-aged kid, but I thought he was a really slick, hip grown-up, so I thought, ‘I want to be into that too.’ So I just started buying any records that had ‘jazz’ in the title, like the Modern Jazz Quartet, the Jazz Messengers, the Jazz Crusaders.”

Rainey spent two summers attending music camp at the University of the Pacific in Stockton, Calif., which ended up being both a humbling and a life-changing experience. As something of a hometown rock star, Rainey was stunned to find himself suddenly surrounded by musicians playing at a more advanced level. “It was the first time I wasn’t the star in the band,” he explains. “In high school, it was such a small town that I was a big fish in a small pond. [At camp] I was nothing. I conned my way in and was really cocky, but I got my comeuppance. They were merciless, and they should have been. I sucked.”

One of his fellow campers was bassist Ratzo Harris, who would go on to be one of Rainey’s most important collaborators, but at the time was a chief component in his humiliation. “Ratzo might have been 16 when I met him, and he was a phenom,” Rainey says. “He kicked my ass all over the place. I thought I was this hotshot little drummer and Ratzo decimated me. He was on my ass about my time and I almost quit playing drums. But he did a really beautiful thing and wrote me a letter a few months later, giving me suggestions about what I could do to improve. It was incredibly giving and mature for somebody who was in high school.”

At 17, Rainey embarked on a short-lived stint at Berklee, dropping out in his fourth semester and returning to the Bay Area, where he resumed his pop career. “I was working my ass off, playing like five nights a week,” he remembers. “I also had a quartet, one of the first times I was in a collective band and writing music. We tried to sound like early Weather Report. I was playing a lot, but most of it was pretty horrifying. I was still young enough that I could enjoy it, but I wouldn’t recommend it.”

In 1979, Rainey made what would turn out to be a permanent move to New York, where he soon reunited with Ratzo Harris. His old campmate invited Rainey to an after-hours jam session. “The first thing I noticed,” Harris recalls, “was that he was 6 feet tall, he no longer had a pageboy bob, and he’d grown a beard. The next thing I noticed was he was a bad motherfucker.”

The two began working together steadily, most notably inaugurating a trio with pianist Kenny Werner that would last for 15 years. “At the time,” says Werner, “Tom and Ratzo had probably as advanced a rhythmic ability as anyone. I wrote tunes that had some surprise moves, and Ratzo and Tom could play them with ease; they could play them well before I could. My goal was just to learn how to play with them.”

In Rainey, Werner found a dedication to exploring new avenues similar to his own. “When the two of us played together,” says the pianist, “we’d feel like it was one hand playing both instruments. Once you hear a groove, as great as swinging is, you’re locked in as far as surprises. Tom, like myself, liked time moving by in a way where you weren’t so cocksure of what was happening, and therefore it was very fresh. Tom liked those solutions rather than the solutions that were tried and true.”

The Werner Trio could never be mistaken for Rainey’s other long-term trio gig with pianist Fred Hersch and bassist Drew Gress. According to Rainey, the two situations were “as different as Kenny and Fred are. It’s the same as asking what it’s like to talk to Fred as opposed to talking with Kenny. When you’re in it, they could be playing different instruments. After a while, the instruments are almost incidental to what’s happening. You’re really playing with personalities.”


The rest of this article appears in the November 2010 issue of JazzTimes. Originally Published November 1, 2010

When you’re on TV, everybody knows you, or at least thinks they know you. Take Kevin Eubanks, who was on NBC’s Tonight Show five nights … END_OF_DOCUMENT_TOKEN_TO_BE_REPLACED

Jimmy Katz leads many lives. He is the preeminent currently active jazz photographer, and has shot more than 200 magazine covers and over 600 recording … END_OF_DOCUMENT_TOKEN_TO_BE_REPLACED

Take a look at Blue Note Records’ release schedule for 2022 and it’s hard to miss the significant percentage of electronic-oriented music. In March, the … END_OF_DOCUMENT_TOKEN_TO_BE_REPLACED