Skip to content
Become a member and get exclusive access to articles, live sessions and more!
Start Your Free Trial
Home > Features > The Vision Festival: From Upstart to Institution 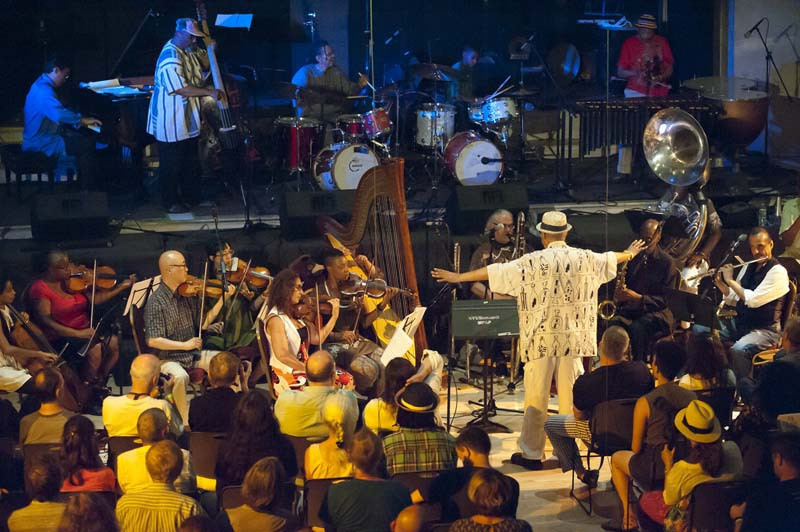 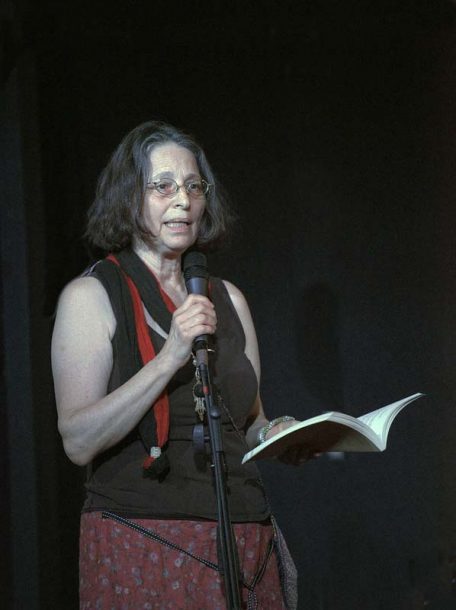 The Vision Festival was exactly one hour behind schedule by the time baritone saxophonist Hamiet Bluiett’s sprawling Telepathic Orchestra began its hour-long closing set in New York in mid-July. No surprise there. Time has been a relative concept at the festival since its debut in 1996, with the schedule often becoming a list and order of performers untethered to a clock. Most performers and audience members know the drill, but there have been exceptions: An annoyed Jaki Byard spent part of his 1998 set conducting an impromptu lecture and banging on piano keys while chanting: “Kiss my ass!”

Some have thought the Vision Festival lost in time because it celebrates an avant-garde brand of jazz often closely associated with the ’60s. Held in a series of synagogues, churches, theaters and funky performance spaces, the festival has indeed always been a “happening” because it includes visual artists, poets, political activists and filmmakers as well as volunteerism and grassroots commerce. “Early on, people seemed to be embarrassed by the idealism of the Vision Festival, particularly in the press,” said founder and artistic director Patricia Nicholson Parker, a few days after this year’s closing night. “They think of idealism as a bad thing. But what I’m trying to do, and this may be corny, is give people hope-that you can be successful doing what you really want to do.”

The Vision Festival has arrived as the hopeful festival that could, and did. It operates as a non-profit, non-corporate-funded affair run by Arts for Art’s Nicholson Parker, a dancer by profession but a tireless worker by disposition, along with a staff of volunteers and helpers. Few would have bet that it would be New York’s only continuously run jazz festival over the last 20 years, becoming the David to such Goliaths as the various festivals presented by the George Wein-founded Festival Productions and the Knitting Factory under Michael Dorf.

The Vision Festival has even succeeded where previous grassroots festivals organized by Nicholson Parker’s husband, the preeminent avant-garde bassist William Parker, and the circle of musicians in the Downtown scene, had not. “This one has survived because it’s not run by musicians,” he pointed out during the festival. “You need a catalyst to keep it going-someone with a vision and an idea, which in this case is Patricia. The other festivals we did were good for the year we did them. But musicians essentially wanted to play music, get an agent and not have to produce all their own concerts.”

According to Nicholson Parker, this year’s festival (July 5-12) had the highest attendance numbers yet, with five nights of music filling Greenwich Village’s Judson Memorial Church, which had seating for 250 with more people standing on the side and in back. There was also a day of panels at Columbia University and another of jazz documentaries and concert films at Anthology Film Archives.

Highlights this year included the world premiere of the commission “Peak/Abyss” by multireedist Roscoe Mitchell, who performed in two trios and then a combined quintet. William Parker’s uplifting tribute to Martin Luther King was a consensus highlight, featuring a drummer-less sextet and five vocalists. Dressed in white and often chanting as he played, drummer Milford Graves, a perennial festival favorite, led a quintet through a set that played out like a series of duets between him and his musicians. Trumpeter Wadada Leo Smith’s actual duo set with pianist Aruán Ortiz was filled with spikey notes, slurred textures and majestic declarations that achieved the best sound in the Judson space.

Judson’s vaulted church ceiling was populated with an art installation of yellow beach-ball-sized balloons, as film and visional art was projected onto the wall behind the stage. It made for a visually striking setting, but was less kind to bands that played loud or included an aggressive drummer like Graves, turning the sound muddy.

But veterans of this itinerate festival could say the same for the years held at the stately but dilapidated Angel Orensanz Center, the chummy basement of St. Nicholas of Myra Orthodox Church and Old St. Peter’s gym/youth center. The festival has sounded more pristine in recent years, at Roulette, the Abrons Art Center and the Knitting Factory’s former Tribeca location in Manhattan, which was the festival’s single foray into a nightclub.

According to Matthew Shipp, “It’s impossible to pick a favorite space, but I like Judson Church for its centrality and iconic aspect of space. Roulette has that great, great piano. And the Orensanz Center has the LSD-type tripping-out aspect of the place; even if the acoustics are not the best, it always felt like a free-jazz acid trip.”

Shipp is right about both Judson’s history of social activism, which reaches back to the ’60s, and the location-the most central yet, on Washington Square South. But Judson also has a great festival layout, with a second room downstairs from the main space where CDs, books and other merchandise as well as food and drinks were sold. It made for a great gathering space between sets, or when one simply needed a break or wanted to chat with friends. “Some people value the whole festival with its complexity, with its social-ness,” Nicholson Parker said. “For them it’s a community-building event. Then other people just want to hear great sound. Roulette is great for that and lots of other things. If that’s what you want, then you aren’t going to be happy with what it was this year. But I think you then don’t value what the festival is on a more complex level, which didn’t work at Roulette.”

There is also an emerging sense that the festival is now an institution worthy of support and recognition. This goes beyond donors and grant givers, with the daylong academic symposium at Columbia University on the Monday before the festival drawing dozens of people this year. “Our guest speakers and panelists raised some challenging and thought-provoking issues,” said University of Minnesota Music School lecturer Scott Currie, who also worked for the festival during its early years. “I don’t know whether that validates the festival, or the scholarly practice that is growing up around it, but I suspect it probably works both ways.”

More changes are in the offing for the festival as well. Nicholson Parker is now turning over the administrative reins to bassist Todd Nicholson, who returns to the fold after years of living in Japan. It will be his chore next year to wrestle with the concept of “Vision Festival time,” but Nicholson Parker should be forgiven for letting things go late this year.

“This year was particularly bad,” she admitted with a laugh. “It was a throwback to the late ’90s. We went back to our bad old ways. We knew it would run late. But when it came down to it, I didn’t want it to end. I had this feeling: Oh no! It’s over.”

Put a “the” in front of a name and it acquires historical heft. The Thelonious Monk who entered New York City’s WOR Studios as Halloween … END_OF_DOCUMENT_TOKEN_TO_BE_REPLACED

On the enchanted evening of August 16, 1958, Ella Fitzgerald took to the stage of the legendary Hollywood Bowl. There, with a lustrous orchestra conducted … END_OF_DOCUMENT_TOKEN_TO_BE_REPLACED

Be careful what you wish for.  By the beginning of 2020 guitarist Mary Halvorson, one of the most acclaimed musicians of her generation, was also … END_OF_DOCUMENT_TOKEN_TO_BE_REPLACED

Guitarist Will Bernard bears the bittersweet blessing of virtuosic skill and eclectic taste, making his music a perpetual delight and yet hard to categorize. Maybe … END_OF_DOCUMENT_TOKEN_TO_BE_REPLACED