Skip to content
Become a member and get exclusive access to articles, live sessions and more!
Start Your Free Trial
Home > Features > The Soulful Crossover of Kamasi Washington 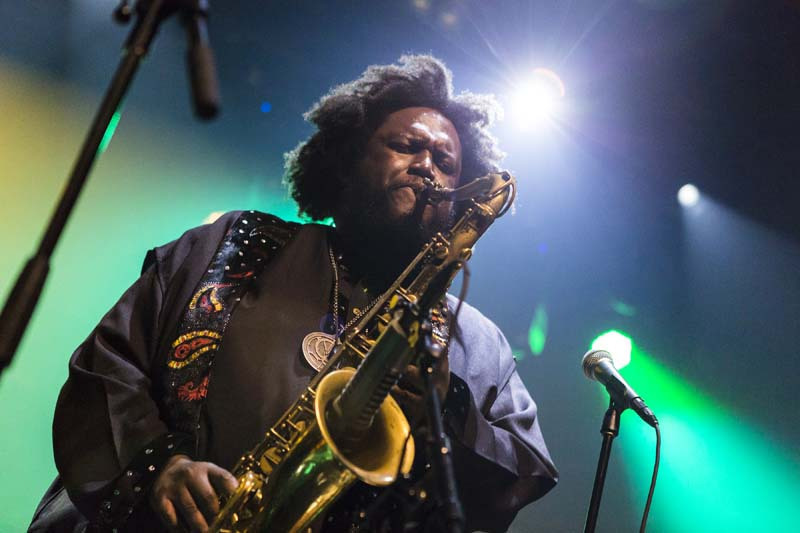 In late February, during an interview for another magazine, I asked the saxophone colossus Sonny Rollins a question about jazz and the pop mainstream-basically, how much crossover is too much? “I came up in the golden days,” he said, gazing across his living room in upstate New York at the photographs of Lester Young, Art Blakey and Louis Armstrong on the opposite wall. “But when Miles changed and did more rock things, I was in favor of that, of people doing whatever they can do. I played with electric guitars, Fender Rhodes piano. I was also reviled for that. But I always felt music was open, and you should be able to do anything.”

Rollins, whose credits include the Rolling Stones’ Tattoo You, acknowledged the high price of purism today. “Every time I talk to jazz musicians,” he said, “it’s, ‘Oh, man, there’s no work out there.'” Drawing from outside the niche for inspiration, a path forward and some just reward “should be considered as a way to go, if you can do it,” Rollins said emphatically. He also cited a hopeful example: Los Angeles tenor saxophonist Kamasi Washington’s 2015 debut album, a three-CD monument and new-year media sensation called The Epic. “I’ve got it. It’s great,” Rollins continued. “He’s coming out of a certain period”-mid-’60s spiritual John Coltrane-“but I think he’s growing more into himself.”

The following night, I saw Washington’s first concert of 2016, a sold-out Winter Jazzfest affair at New York’s Webster Hall. As a rock journalist by profession, I’ve spent many nights on that floor and in the balcony, including early shows by U2 and Guns N’ Roses, when it was called the Ritz. As a jazz fan by passion, I’m pretty certain Washington’s show was my first jazz gig there. It was also a party out of bounds, immediately running in explosive, celebratory gear when Washington and his six-piece group hit The Epic‘s opening fanfare, “Change of the Guard.” A bright swirl of clarion horns, double-drumming and Patrice Quinn’s operatic vocal lining, it evoked a sumptuous Strata-East record of big-band Fire Music; the very early Earth Wind & Fire; and the furious undercurrent of the Allman Brothers’ At Fillmore East. At one point during another Epic track, “Askim,” Washington, a genially commanding presence with his broad smile, regal Afro and floor-length shaman’s coat, uncorked a muscular ascent-and-slalom on his tenor across the hard-funk surge, suggesting a mid-’60s Rollins running loose through Michael Jackson’s Off the Wall.

The night was visibly charged too, onstage and in the audience-a riveted, often dancing crowd, much more Bonnaroo than Birdland-by Washington’s momentum everywhere else. That afternoon, he had taped an interview for PBS’ Charlie Rose; a few weeks earlier, the saxophonist was the subject of an eight-page profile in the New York Times Magazine. In between there was the Grammy-night glow of his soloing and string arrangements on rapper Kendrick Lamar’s multiple winner, To Pimp a Butterfly. The Epic, incredibly, didn’t merit a jazz nomination. But a week after the Webster Hall date, the album won the inaugural American Music Prize, a new U.S. response to the strictly critical measure of Britain’s Mercury Prize. (Full disclosure: I was an AMP judge.)

Washington’s crossover is exciting in its velocity-the electric Miles Davis was still opening rock shows for Leon Russell and the Band months after he released Bitches Brew-and striking in its routing through pop life. There was the friend of a guitarist in the black-rock band Fishbone who, in 1999, recommended Washington, then studying with composer Gerald Wilson at UCLA, for a tour backing rapper Snoop Dogg. In 2011, after the West Coast Get Down, the L.A. collective founded by Washington’s bassist Miles Mosley, recorded the mountain of music that included the 17 pieces on The Epic, Washington turned to Brainfeeder, a label founded by his friend, producer-DJ Steven Ellison, a.k.a. Flying Lotus. A year earlier I saw Ellison, a grandnephew of Alice Coltrane, open a New York show for Atoms for Peace, Radiohead singer Thom Yorke’s supercombo with bassist Flea of the Red Hot Chili Peppers.

I’ve been here before, usually going the other way. The first time I heard a Sun Ra tune was in 1969, blown up with guitars on the MC5’s Kick Out the Jams. Three decades and many Ra shows later, I saw Phish guitarist Trey Anastasio put his own Ra love on record and stage, cutting the 1996 free-jazz album Surrender to the Air with Marshall Allen and Michael Ray of the Arkestra, then leading that ensemble through two shows for perplexed but curious Phish fans in New York. In 1999 I saw the late avant-tenor titan David S. Ware open a New York concert for the rock band Sonic Youth, shredding the air with his reconception of “The Way We Were.” Later, when I spoke to Ware for liner notes to his 2000 album Surrendered, he told me about how Charles Lloyd’s Love-In had had a profound effect on him. Lloyd was in the heady midst of his own hippie-jazz crossover then, recording that LP live in 1967 at the Fillmore Auditorium in San Francisco-during an engagement with the Paul Butterfield Blues Band.

Crossing over from any other music into pop is typically considered a devil’s transaction: the exchange of one’s soul and ambition for greater, immediate commercial gain. Yet for all of Washington’s associations with West Coast rap, there is no hip-hop on The Epic. The two covers are dramatic expansions of Ray Noble’s “Cherokee” and Debussy’s “Clair de Lune.” Instead, Washington’s background in R&B, including tours with Chaka Khan and Lauryn Hill, comes through in his sheets-of-light arrangements for strings and choir, surely descended from Alice Coltrane’s records, Curtis Mayfield’s early-’70s productions and, I’ll wager as a Philly native, the orchestral sweep and sprint of my O’Jays and Harold Melvin & the Blue Notes LPs.

Washington is a jazz artist. That is one of the things I find most fascinating about his accelerating stardom and the broadening impact of The Epic. The saxophonist has connected without compromise, right down to the protean length of that record. Indeed, the best analogy for Washington’s crossover, in effect if not speed, may be the Roots. For more than a decade, across a gripping and provocative succession of albums, the Roots, hip-hop to their bones, could not get a hit single in their own community. Now their jubilant subversion is a network-TV attraction on The Tonight Show. In the best crossing over, the artist moves on and up-and the world follows.

That’s what Rollins sees for Washington. “I love the music and I love him,” the former said as we came to the end of our conversation. “He’s on his way to the heavens, as far as I can see.”

David Fricke is a senior writer at Rolling Stone and the host of The Writer’s Block on SiriusXM Radio. This is his first contribution to JazzTimes.

In its near-century of excellence, The New Yorker has been home to more than its share of tops-in-their-field contributors. There’s E.B. White, with his luminous … END_OF_DOCUMENT_TOKEN_TO_BE_REPLACED

Put a “the” in front of a name and it acquires historical heft. The Thelonious Monk who entered New York City’s WOR Studios as Halloween … END_OF_DOCUMENT_TOKEN_TO_BE_REPLACED

On the enchanted evening of August 16, 1958, Ella Fitzgerald took to the stage of the legendary Hollywood Bowl. There, with a lustrous orchestra conducted … END_OF_DOCUMENT_TOKEN_TO_BE_REPLACED

Be careful what you wish for.  By the beginning of 2020 guitarist Mary Halvorson, one of the most acclaimed musicians of her generation, was also … END_OF_DOCUMENT_TOKEN_TO_BE_REPLACED