Skip to content
Become a member and get exclusive access to articles, live sessions and more!
Start Your Free Trial
Home > Features > The New School: Back to the Future 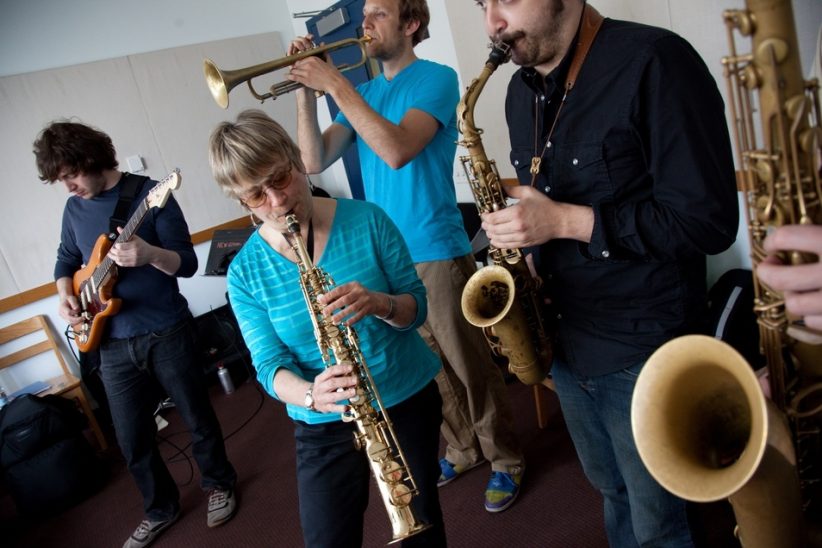 Jane Ira Bloom and students, courtesy of the New School 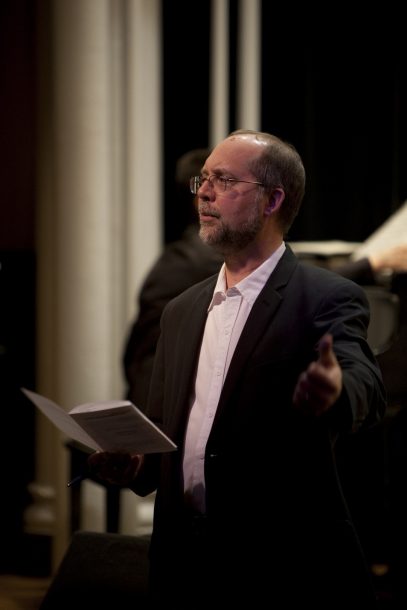 n 1986, Larry Goldings was in the middle of a music theory lecture as a young student in the first-ever entering class at the New School for Jazz and Contemporary Music, when saxophonist Arnie Lawrence, the program’s late founder, sauntered in unexpectedly.

“‘Sorry to interrupt, but the rest of the day will be Art Blakey Day,’ he said. And in walks Art Blakey,” Goldings remembers. There were only 36 people in the class that day, the entire student body at the time, and for three hours, the legendary drummer regaled them with stories of life on the road with the Jazz Messengers. Goldings even got to jam with him. Twenty-five years and dozens of albums later, Goldings has solidified a reputation as one of the most sought-after organists on the scene today. For him, the untested jazz program offered indispensable life lessons in addition to theoretical training.

“At the New School, the real learning happens away from the blackboard, in a way. Education didn’t happen with theory books and modes and scales,” says Goldings, who has since periodically returned to the undergraduate-only program as a teacher. After crossing paths with such jazz greats as Walter Davis Jr., Jon Hendricks, Roland Hanna, Jim Hall and Jimmy Heath, some of whom he later went on tour with, Goldings realized how much of an impact these brief encounters can have on a student. Jaki Byard even used to drive him around the city in his car. “Arnie encouraged everybody to learn songs by ear and learn harmony by ear, to learn it by osmosis, through being around people of greatness who were just one generation away from the beginnings of jazz.”

As the program hurtles into its 25th-anniversary year, this liberal atmosphere continues. And starting this fall, the school is commemorating its commitment to innovation with a series of concerts, workshops, film screenings and seminars. Among the scheduled programs will be a duo performance by Brad Mehldau and Joshua Redman, a tribute to Brazilian vocalist Caetano Veloso by trombonist and New School faculty member Chris Stover, an evening with pianist Hal Galper, and “Harlem Speaks,” an interview series co-produced by the National Jazz Museum in Harlem that will feature many of the living legends of jazz.

Bow regarded as one of the world’s vanguard jazz studies programs, the New School for Jazz and Contemporary Music emerged out of a larger history of cutting-edge education in and out of jazz. The program is, of course, an outgrowth of the institution known initially as the New School for Social Research, founded in 1919 by a group of dissident professors at Columbia University and various other schools who were dissatisfied with rigid administrative mandates. In 1941, the school was the first American university to offer a course on jazz history, taught by early jazz scholars Leonard Feather and Robert Goffin.

The seeds were planted for a jazz performance program in late 1984, when Lawrence approached David Levy, a former dean of the New School’s Parsons School of Design, with the vision of a progressive advanced degree program that would connect students from all walks of life with eminent jazz figures. Levy responded with enthusiasm, and although they were met with some initial skepticism, the two garnered enough support from New School administration to push forward. Anywhere else, the notion of a working jazz musician launching a grassroots effort to start a conservatory program at a major university might be scoffed at, but not at the New School.

Armed with a promising idea but no capital, Levy contacted printer and jazz promoter Paul Weinstein with a proposition: Print 35,000 catalogues advertising the program pro bono. (Payment would be deferred pending the plan’s success at attracting prospective students.) Weinstein seized the opportunity to be an instrumental part of what might become jazz history, and the pamphlets were distributed to high schools across the country. The next fall, the fledgling program began at 66 Fifth Avenue in Greenwich Village, and despite the pared-down facilities-one unisex bathroom, for example, served the three dozen students, faculty and staff-Lawrence’s dream had been realized. Drummer Chico Hamilton and guitarist Vic Juris were among the first faculty members, and beyond the impromptu special guests he brought in, Lawrence established a student-led jam session at the hallowed, now-defunct Village Gate. With momentum building, the program grew to accommodate some 300 students at any given time, with a faculty of more than 70 respected artists.

The program received an overseas complement in 1997, when Lawrence left New York and established the International Center for Creative Music in Jerusalem, a school that promoted reconciliation between Arabs and Israelis through music. Starting this school year, the New School will launch new outreach programs in Brazil and Argentina and foster ongoing partnerships with the Bern International Jazz Festival, the Veneto Jazz Festival and Casa Del Jazz in Rome. Due to the New School’s international visibility and diverse campus, the program nurtures the type of multiculturalism that treats jazz as a constantly evolving art form.

Like an ornery real-estate magnate, the work of Nick Millevoi screams, “Location, location, location.” Whether as a composer or as a guitarist, he makes music … END_OF_DOCUMENT_TOKEN_TO_BE_REPLACED

To say that the recorder has no cachet in jazz is putting it mildly. But that never deterred Tali Rubinstein. In fact, the instrument’s status … END_OF_DOCUMENT_TOKEN_TO_BE_REPLACED