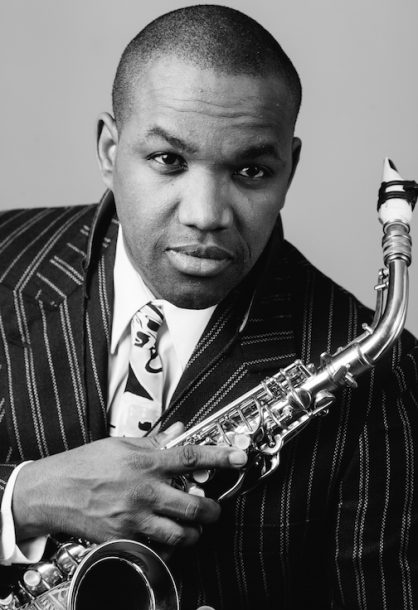 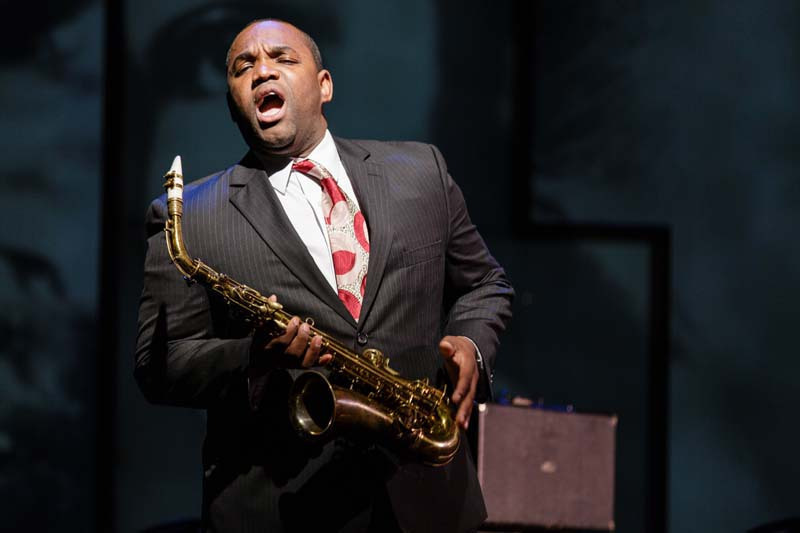 Charlie Parker’s desire to explore the crossroads of jazz and modern classical music, including the innovations of Stravinsky and Varèse, has become an integral part of his legend. Charlie Parker’s Yardbird, the new opera that premiered in June, running for five sold-out performances under the auspices of Opera Philadelphia, is not an attempt to realize those ambitions, exactly, but it does depict a fantastical last attempt at Bird’s “jazz symphony” via a classical opera with bebop accents.

Parker is already deceased when the opera begins. The piece is set in a black-on-black noir Birdland, a nightclub purgatory where Bird’s spirit spends the two days that Parker’s body sat unidentified in the morgue. He’s determined to use that time to compose his symphonic masterwork, but memories of his tragic life continually intrude, distracting him from the task at hand.

Swiss-born composer Daniel Schnyder is a saxophonist who regularly melds the jazz and classical idioms in his work, making the elusive Parker symphony a personally compelling framework for the piece. “The whole opera is about the dream of Charlie Parker to bridge these two worlds, something that was historically true,” says Schnyder, who spoke to Third Stream pioneer Gunther Schuller about that topic just months before Schuller’s death. “It’s a very unnatural situation to have two or three music worlds separate from each other. You can compare it to having some books written with the letters A to M and other books written with the letters from N to Z. That would be a really stupid divide, but music is divided a little bit like that. It doesn’t make any sense.”

Charlie Parker’s Yardbird was devised as a vehicle for bel canto tenor Lawrence Brownlee, whose supple, soaring voice Schnyder recognized as an ideal analogue to Parker’s saxophone. At Philadelphia’s Kimmel Center, Brownlee expressed Bird’s lines with sharp agility, occasionally erupting with a scat run or infusing a lyrical melody with a touch of jazz tempo, linking bop and Rossini effortlessly. “Most of what I sing is Rossini and Donizetti, music that people would consider virtuosic,” Brownlee says. “You can look at the music of Charlie Parker and see the virtuosity in it, so Daniel thought it would be a good idea to marry his life story and his brilliance in the jazz medium with a voice like mine that is fluid and flexible. That bel canto repertoire is written out but it should sound improvisational, spur-of-the-moment, so I have to think of myself as a jazz musician and have a great deal of flexibility and freedom with what I’m doing.”

The libretto was written by poet and playwright Bridgette Wimberly, whose uncle had been a saxophonist who emulated both Bird’s playing and his heroin addiction-thus earning Parker the eternal enmity of Wimberly’s grandmother. “It was interesting to go back and research a guy who wasn’t spoken highly of in my youth,” Wimberly says. “I knew he was a genius on the saxophone and I knew the time period he was born in, but all the other stuff I had to research and get into my own DNA until I could find the story to tell.”

That story ended up unexpectedly focusing on the women in Bird’s life: three of his wives, his mother and the Baroness Pannonica de Koenigswarter, the jazz patroness in whose apartment Parker died. The only other primary male character in the opera is Dizzy Gillespie, played by baritone Will Liverman, who hopelessly attempts to rescue his friend and partner from the lure of heroin.

Each of the wives comes to represent a different period in Parker’s life: Chrystal Williams’ Rebecca his impoverished beginnings, Angela Mortellaro’s Doris his arrival in New York City and Rachel Sterrenberg’s Chan his rising fame, tinged with the devastating loss of their daughter, Pree. The standout performance of the show, however, was Angela Brown as Bird’s mother, Addie Parker, who warns her son against the temptations of the “Devil’s music” and mourns his decline in a soprano voice that combined operatic expressivity with blues power.

Schnyder wisely chose not to dilute the opera by asking the Opera Philadelphia Orchestra to imitate jazz musicians, but he nonetheless conjured a jazz feel throughout the 90-minute piece. In some cases that was literal, with familiar melodies woven into the score: Nica (Tamara Mumford) enters to Monk’s “Pannonica”; the specter of Bird’s wheelchair-bound dealer appears to an ominous arrangement of “Moose the Mooche”; Chan’s line “on the wrong side of midnight” triggers a hint of “‘Round Midnight.” But less obviously, the bop milieu is suggested in the acute twists of melody and the hectic, syncopated rhythms that drive the score, and Parker’s early days are laced with blues and gospel touches.

While there are less successful moments-Parker’s stint at Camarillo State Hospital is depicted with stage hokum like strobe lights and funhouse music, with straitjacketed patients shuffling like zombies-the opera is both sensitive and compelling. It’s also an apt tribute to Bird’s frustrated ambitions and influential achievements.

In its near-century of excellence, The New Yorker has been home to more than its share of tops-in-their-field contributors. There’s E.B. White, with his luminous … END_OF_DOCUMENT_TOKEN_TO_BE_REPLACED

Put a “the” in front of a name and it acquires historical heft. The Thelonious Monk who entered New York City’s WOR Studios as Halloween … END_OF_DOCUMENT_TOKEN_TO_BE_REPLACED

On the enchanted evening of August 16, 1958, Ella Fitzgerald took to the stage of the legendary Hollywood Bowl. There, with a lustrous orchestra conducted … END_OF_DOCUMENT_TOKEN_TO_BE_REPLACED

Be careful what you wish for.  By the beginning of 2020 guitarist Mary Halvorson, one of the most acclaimed musicians of her generation, was also … END_OF_DOCUMENT_TOKEN_TO_BE_REPLACED