Skip to content
Become a member and get exclusive access to articles, live sessions and more!
Start Your Free Trial
Home > Features > The Legacy of Jimmy Scott

Jimmy Scott, who died in 2014, at age 88, sang with a sense of honesty and vulnerability that earned him a legion of famous fans 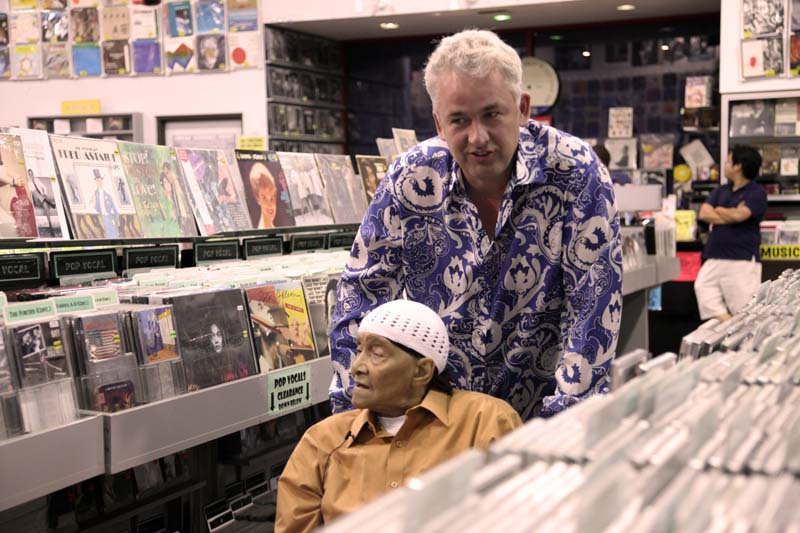 Jimmy Scott and Ralf Kemper, who produced the singer's final album, "I Go Back Home" 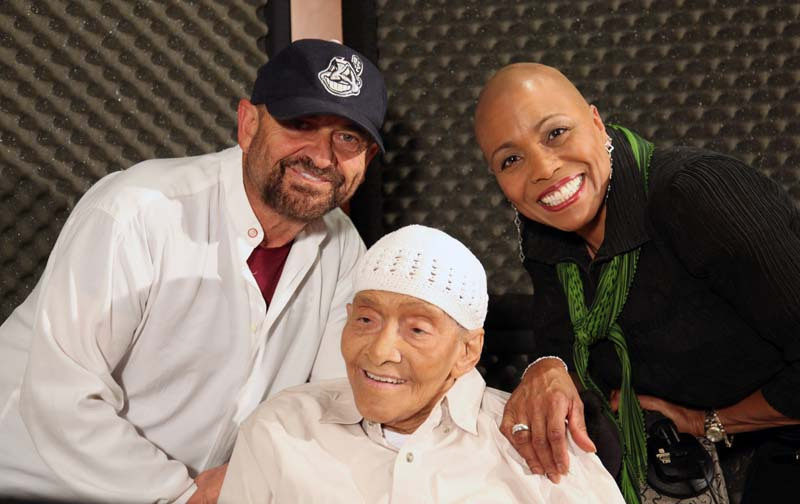 Jimmy Scott with Joe Pesci and Dee Dee Bridgewater, two of the guests on "I Go Back Home"

Music history has more than its share of outcasts and eccentrics. Its annals are also filled with tales of thwarted careers and glorious resurrections. And, sadly, there are endless examples of artists bilked by unscrupulous advisors and handlers. Vocalist Jimmy Scott, arguably the finest balladeer of the past century, his influence felt well beyond the jazz milieu, checked all those boxes.

Scott, who died two years ago, just a month shy of his 89th birthday, never attained mainstream stardom, yet he ranks among the most respected “singer’s singers,” his long list of acolytes and admirers stretching from Nancy Wilson to Madonna, Frankie Valli to Lou Reed. His story, a twisted saga of personal and professional struggles, dogged perseverance against towering odds and ultimate-if relative-triumph is so fascinating, so singular, that during his lifetime he was the subject of four documentaries. Most recent is I Go Back Home, which chronicles the German producer Ralf Kemper’s relentless efforts to realize his dream of working with Scott, on what would prove to be the singer’s final album. Directed by Yoon-Ha Chang, the film premiered this past March at Austin’s South by Southwest festival. The accompanying double album, to be released on Jan. 27 by Kemper’s Eden River Records, spans widespread studio sessions, begun in 2009, capturing Scott and a stellar cast of guests including Dee Dee Bridgewater, James Moody, Oscar Castro-Neves, Kenny Barron, Joey DeFrancesco, Grégoire Maret, Terry Gibbs and one of Scott’s longtime friends, the actor and singer Joe Pesci.

It is prophetic, and a bit heartbreaking, that Scott, born in Cleveland in 1925, the third of 10 children, was given the middle name Victor. Despite a lifetime of hardships, setbacks and disappointments, he maintained remarkable optimism, perennially certain that fortune’s smile was due, even throughout long fallow periods when he worked as an elevator operator, shipping clerk and dishwasher. Stories of his kindness and generosity are legion. Only when he drank, a habit he developed early on that never subsided, did any wisps of bitterness or regret emerge.

At 13, Scott suffered dual tragedies that forever defined him personally and professionally. A drunk driver took the life of his beloved mother-it is hardly surprising that “Sometimes I Feel Like a Motherless Child” became a cornerstone of his songbook-and because his father had neither the wherewithal nor the inclination to keep the family together, Scott was farmed out to orphanages and foster homes. Loneliness and the search for sustainable love would subsequently underscore his every performance and recording (and would contribute to his marrying five times).

Mere weeks after his mother’s death, he was diagnosed with what would later be identified as Kallmann syndrome, a congenital disorder that results in a perpetual state of puberty. His height stalled at 4-feet-11-inches (though he would experience a 7-inch growth spurt two decades later), and his voice remained stuck in its prepubescent treble range. “What makes him special,” Pesci says in the film, “is knowing so much about life and hurt. [When] you hear Jimmy Scott sing, it’s a serious spiritual experience.”

By 16 he’d quit school and, with no formal training, begun singing professionally. From the outset, Scott favored a tortoise-paced style, elongating words-extending “time” or “day” to three or four syllables-and singing way behind the beat. Quincy Jones quipped to Scott biographer David Ritz, “You can shave between the beats,” while also crediting him with “the hippest jazz phrasing, and delivered in that seductive rhythm delay of his. [It] had its own luxuriant sheen.”

Like Sinatra, he made every song uniquely his own. No other version sounds like Scott’s; no other reading delivers the same tear-stained wallop. Also like Sinatra, he knew what songs worked for him. Though Scott recorded dozens of tunes, he focused, particularly during live performances, on a tried-and-true handful including “Motherless Child,” “Someone to Watch Over Me,” “How Deep Is the Ocean,” “The Talk of the Town,” “The Folks Who Live on the Hill” and his first and only hit, “Everybody’s Somebody’s Fool,” from his tenure with Lionel Hampton in the late 1940s and early ’50s.

In 1955 Scott signed with Savoy Records. Label honcho Herman Lubinsky didn’t know quite what to do with him. Scott cut more than five-dozen sides for Savoy, ranging from tender ballads to R&B tearjerkers aimed at the emergent teen market, essentially presaging the doo-wop movement. Frankie Lymon, Sonny Til and Little Anthony all owe him a significant debt, as does Valli, who told Ritz, “When I heard that voice, that cry, that phrasing, those emotions coming out of that little man, I’d found what I didn’t even know I’d been looking for. I found truth.”

Among Scott’s most ardent fans was Ray Charles. In 1962, when Charles launched his own label, Tangerine, Scott was his first signee. With Charles playing piano on all 10 tracks, they crafted Falling in Love Is Wonderful, a sublime collection of ballads that Marvin Gaye, another devotee, called “calming, haunting and just plain beautiful.” It stands shoulder to shoulder with Sinatra’s In the Wee Small Hours and John Coltrane and Johnny Hartman. Indeed, the majesty of Hartman’s slow, measured balladry points directly to Scott, as does that of Shirley Horn. Falling in Love should have ignited an overdue breakthrough. Instead, Lubinsky insisted that Scott was still under contract to Savoy and, Charles sidestepping a lawsuit, had the album pulled after two weeks. It wouldn’t resurface for nearly four decades, finally released on CD in 2002.

Seven years later, producer Joel Dorn, also an impassioned Scott fan, signed him to Atlantic and shaped the nearly as exquisite The Source. Again Lubinsky, once described by Dorn as “a human haemorrhoid and close, personal friend of the devil,” blocked the album. Not until 1992, when Seymour Stein, prompted by Scott’s performance at Doc Pomus’ funeral, brought him to Sire Records, did he achieve a hit with the sumptuous All the Way. All at once, Scott emerged as a darling of music’s iconoclastic elite, including Elvis Costello, Flea, Bruce Springsteen and Reed (with whom he briefly toured). Sire label-mate Madonna insisted he was the only singer who could make her cry. Michael Jackson and Prince refracted his androgynous vulnerability. A decade later, four stellar albums produced by Todd Barkan for Fantasy would represent the crowning glory of his crazily peripatetic career, while the Kemper sessions, also stunning, confirm that the emotional heft of Scott’s glorious otherness never dissipated.

His small but mighty legacy continues to resonate today, most notably in the work of Melody Gardot and Madeleine Peyroux. Says Peyroux, who contributed to I Go Back Home but whose rendering of “Give Your Mama One Smile” is not included on the CDs: “If I believed in reincarnation, it’s what I’d want to be-to be so perfect as a human being. He was incredibly selfless and gentle, and everything about his singing is soothing and healing. I remember hearing him sing ‘Jealous Guy,’ and it was just too good. I thought, ‘We’re not going to do any better than that. We’re done here.'”

Toward the end of I Go Back Home, Kemper, toiling tirelessly for years and selling his Düsseldorf studio to help fund the project, realizes he can’t find a distribution partner even with the album’s all-star lineup. It’s a scenario that painfully echoes Scott’s detour- and roadblock-cluttered past. Yet just before the credits roll, Scott’s indefatigable sanguinity prevails. Frail and wheelchair-bound, he turns to the camera, smiles and says, “I just kept dreaming and hoping.”

When you’re on TV, everybody knows you, or at least thinks they know you. Take Kevin Eubanks, who was on NBC’s Tonight Show five nights … END_OF_DOCUMENT_TOKEN_TO_BE_REPLACED

Jimmy Katz leads many lives. He is the preeminent currently active jazz photographer, and has shot more than 200 magazine covers and over 600 recording … END_OF_DOCUMENT_TOKEN_TO_BE_REPLACED

Take a look at Blue Note Records’ release schedule for 2022 and it’s hard to miss the significant percentage of electronic-oriented music. In March, the … END_OF_DOCUMENT_TOKEN_TO_BE_REPLACED

Those who are only familiar with bassist Martin Wind’s jazz credentials—both as a leader and as a first-call sideman for Bill Mays, Dena DeRose, Ken … END_OF_DOCUMENT_TOKEN_TO_BE_REPLACED