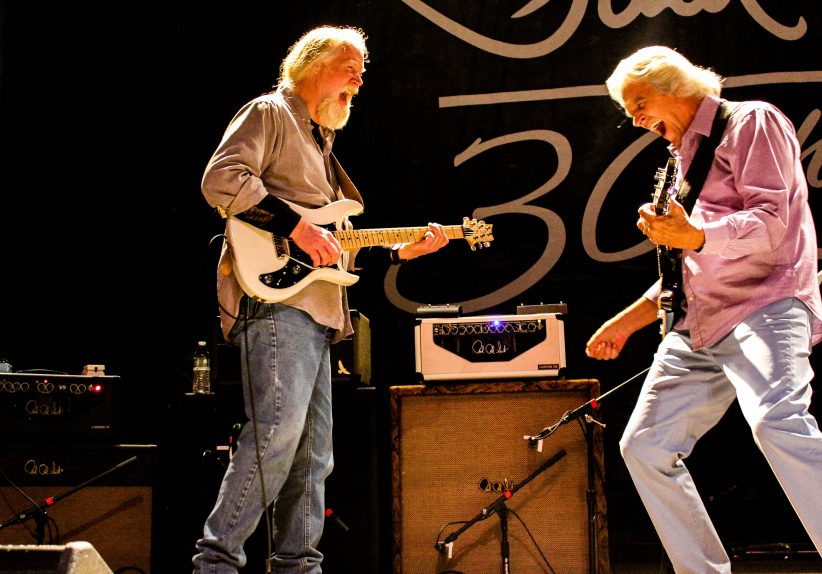 On Jan. 4, John McLaughlin turned 75—a noteworthy birthday for anybody lucky enough to reach it, and one that seems to have led the British guitarist and composer to make some big decisions. In November and December of this year, he will embark on a tour of the United States with his current band, the 4th Dimension, featuring keyboardist/percussionist Gary Husband, bassist Etienne Mbappé and drummer Ranjit Barot. The tour will be his first jaunt around the U.S. in seven years. It will also be his last.

“Yes, this is my farewell tour of America,” McLaughlin confirmed to JT during a recent interview in New York. “That doesn’t mean I’m not coming back, but it does mean I don’t want to travel as much anymore. I’ve been on the road since I was 16, and I’ve got a lot of other musical projects in the works that I want to focus on at this point.”

McLaughlin and the 4th Dimension won’t be touring on their own. Sharing the bill with them will be another enviably talented guitarist, the North Carolinian Jimmy Herring, who came up through the ’90s jam circuit with the Aquarium Rescue Unit and now divides his time between rockers Widespread Panic and his own, more jazz-oriented projects.

Herring and McLaughlin, who share a deep passion for the blues and Indian classical music, got to know each other after becoming labelmates at Abstract Logix. They first played together in 2015, at an all-star show celebrating the 30th anniversary of PRS Guitars (a company they both endorse), and the experience soon had them discussing the possibility of doing more. McLaughlin has called Herring his favorite living electric guitarist besides Jeff Beck, and the admiration is clearly mutual. “I first heard John’s playing when I was 17,” says Herring, 55. “Right from the first few seconds of The Inner Mounting Flame”—the epochal fusion album McLaughlin cut with the Mahavishnu Orchestra in 1971—“I felt like I’d stuck my finger in an electric socket. I didn’t even know what instrumental music was then, but I knew that whatever this was, it was going to be a lifelong commitment.”

Perhaps not coincidentally, the McLaughlin/Herring tour has been given the name “Meeting of the Spirits,” after the opening track on The Inner Mounting Flame. With months to go before the first show takes place, much remains to be worked out, though one structural element seems pretty certain: Herring’s band (most likely including drummer Jeff Sipe, bassist Kevin Scott and keyboardists Jason Crosby and Matt Slocum) is going to play one set, the 4th Dimension will play another, and then both bands will team up for a final set. “Doing this tour with John is, in my mind, all about a celebration of an icon, so of course I’d imagine that I’ll be going on first,” Herring says. “But John’s thinking that we might alternate. I guess in the end it depends on what makes the most sense logistically, in terms of moving amps and keyboards and drum kits around every night.”

Repertoire is still to be determined, but expect plenty of vintage Mahavishnu material. One tune that’s being seriously considered is “Hope,” a seldom-played track from 1973’s Birds of Fire, though it may not be handled by McLaughlin. Herring covered it magnificently on his second solo album, 2012’s Subject to Change Without Notice, and that recording just happens to have been McLaughlin’s first exposure to Herring’s playing. “I’m still knocked out by what Jimmy did with ‘Hope,’” the composer says. “He plays it like he wrote it, and I’d have given my back teeth to play his solo on the album. He has to do that one every night.” Consider the gauntlet thrown down.

When you’re on TV, everybody knows you, or at least thinks they know you. Take Kevin Eubanks, who was on NBC’s Tonight Show five nights … END_OF_DOCUMENT_TOKEN_TO_BE_REPLACED

Jimmy Katz leads many lives. He is the preeminent currently active jazz photographer, and has shot more than 200 magazine covers and over 600 recording … END_OF_DOCUMENT_TOKEN_TO_BE_REPLACED

Take a look at Blue Note Records’ release schedule for 2022 and it’s hard to miss the significant percentage of electronic-oriented music. In March, the … END_OF_DOCUMENT_TOKEN_TO_BE_REPLACED

Those who are only familiar with bassist Martin Wind’s jazz credentials—both as a leader and as a first-call sideman for Bill Mays, Dena DeRose, Ken … END_OF_DOCUMENT_TOKEN_TO_BE_REPLACED