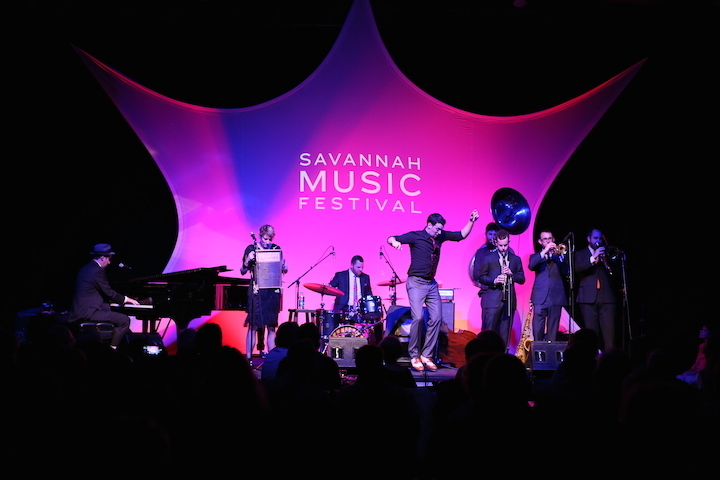 When the Hot Sardines finished their sold-out set at the Manhattan cabaret Joe’s Pub on June 14, an album release show for French Fries & Champagne (Universal Music Classics), no one expected Alan Cumming to come out for the encore. After some salacious stage banter to set the scene, the Scottish actor channeled some combination of Cole Porter and the emcee of Cabaret, one of his signature roles, joining lead singer “Miz Elizabeth” Bougerol in a raspy, slightly nefarious rendition of “When I Get Low, I Get High.” The performance had one half of the crowd dancing in their seats and the other half reaching for their smartphones.

Initially, the New York-based band had no established relationship with the Good Wife star, but thought, “Why don’t we just ask? And to our extreme pleasure, he responded that he knew of our little outfit and was a fan,” says pianist and co-leader Evan Palazzo. Shortly thereafter, they recorded the duet at Manhattan’s now-defunct Magic Shop. The arrangement of the song, which was written by Marion Sunshine and memorably recorded by Ella Fitzgerald, subverts gender norms with Cumming’s noirish vocals. Cumming also appears in the trippy music video, directed by Alex Peacock, imbuing the minor shuffle with an air of Weimar psychedelia.

Vince Giordano, multi-instrumentalist and bandleader of the eminent Nighthawks Orchestra, has followed the Hot Sardines since early in their career. “When I was young, I was worried that the generation of musicians around my age was going to be the last bunch of folks getting involved with traditional jazz. But now there seems to be a wonderful renaissance,” Giordano says. “They’ve got a lot of energy and are really turning young folks on to vintage jazz, which is important.”

That energy is spurred by historical fidelity, bespoke suits, dedicated tap dancer “Fast Eddy” Francisco and impeccable arrangements that harken back to an era when arranging was more important than producing. “The ‘perpetual conflict’ between clarity and grace is what makes hot jazz hot,” wrote John Cage, referring to the unpredictable tension of rhythmic pulse and offbeat phrasing. That and other deft balancing acts have landed the Hot Sardines at the forefront of New York’s robust trad-jazz scene.

French Fries & Champagne, the band’s sophomore album, alternates between frothy confections with strings and greasy hot-jazz standards and originals. The album has the band venturing beyond interwar decadence, the touchstone of their self-titled Decca debut, which included zippy covers of “Honeysuckle Rose” and the Andrews Sisters’ “Bei Mir Bist Du Schön.” French Fries extends the repertoire with a gospel-tinged take on Marilyn Monroe’s “Running Wild,” from Some Like It Hot, and a foray into the ’80s, another era of conspicuous consumption, with Robert Palmer’s “Addicted to Love.”

“We think that a classic isn’t necessarily just what’s known as the Great American Songbook,” Bougerol says of the decision to include the Palmer track. “That tune is a standard from a different era.”

Having performed at Joe’s Pub nearly two dozen times, the East Village venue has been a second home to the band, but they got their start in less frilly digs. Fulltime touring was never the goal; both 43, Palazzo and Bougerol met in 2007 when they answered a Craigslist ad for an open jam session above a noodle shop in midtown Manhattan. At the time, Bougerol was a Parisian-born travel writer turned chanteuse (she authored New England’s Favorite Seafood Shacks); Palazzo was an actor and stride pianist with clarinetist Sol Yaged and actress Lauren Ambrose’s band, the Leisure Class. At first, they busked in the New York City subway. Their debut gig was at a coffee shop by Coney Island. “It was a theory of doing what you love, and it found us as our way of making a living,” Palazzo says.

They got their break when Bill Bragin, the producer of Lincoln Center’s Midsummer Night Swing, stumbled upon the band and asked them to fill in for a last-minute cancellation. Since, they maintained a two-year residency at the Top of the Standard in New York’s Meatpacking District, until their touring schedule led them to the Newport and Montreal jazz festivals, on multiple European tours and to performances with the Boston Pops Orchestra. (Bougerol still brought her washboard.)

Producer Eli Wolf, who has collaborated with Norah Jones and Robert Glasper, experimented with string backdrops on the Hot Sardines’ first album, especially on “Wake Up in Paris,” a Bougerol original. But for their second outing, Wolf and the band decided to develop the concept. “We wanted to play with the juxtaposition of their gutbucket, down-and-dirty side that comes out of the legacy of Louis Armstrong to Louis Prima, and the lush romantic side, in terms of having strings on half the album,” Wolf explains. “The album title kind of signifies that.”

Historically, jazz with strings poses a challenge-for every Clifford Brown With Strings or Ahmad Jamal With the Assai Quartet, there is a treacly misfire like the Bud Shank-Chet Baker collaboration, Michelle-but the Hot Sardines specialize in artful arranging. As they formalized their arrangements, Billy Strayhorn’s The Peaceful Side and Nat King Cole’s Cole Español served as reference points. Some tracks were arranged collectively, others by individual members. “People Will Say We’re in Love” is rendered as a sumptuous tango; on “La Fille Aux Cheveux Roux,” a standard originally recorded as “Weed Smoker’s Dream” and made famous by Peggy Lee as “Why Don’t You Do Right?,” Bougerol wrote new lyrics in French that captured by turns a sense of jouissance and ennui. Throughout, string arrangements by cellist Dave Eggar and conductor Chuck Palmer complement rather than clash.

“Especially now, I think that everything is a big, beautiful, sticky mishmash,” Bougerol says. “It makes it so much fun to be playing music in 2016, when all the boundaries are kind of coming down between genres, and dipping into stuff from a hundred years ago.”

When you’re on TV, everybody knows you, or at least thinks they know you. Take Kevin Eubanks, who was on NBC’s Tonight Show five nights … END_OF_DOCUMENT_TOKEN_TO_BE_REPLACED

Jimmy Katz leads many lives. He is the preeminent currently active jazz photographer, and has shot more than 200 magazine covers and over 600 recording … END_OF_DOCUMENT_TOKEN_TO_BE_REPLACED

Take a look at Blue Note Records’ release schedule for 2022 and it’s hard to miss the significant percentage of electronic-oriented music. In March, the … END_OF_DOCUMENT_TOKEN_TO_BE_REPLACED

Those who are only familiar with bassist Martin Wind’s jazz credentials—both as a leader and as a first-call sideman for Bill Mays, Dena DeRose, Ken … END_OF_DOCUMENT_TOKEN_TO_BE_REPLACED