Skip to content
Become a member and get exclusive access to articles, live sessions and more!
Start Your Free Trial
Home > Features > The Gospel According to Wynton Marsalis 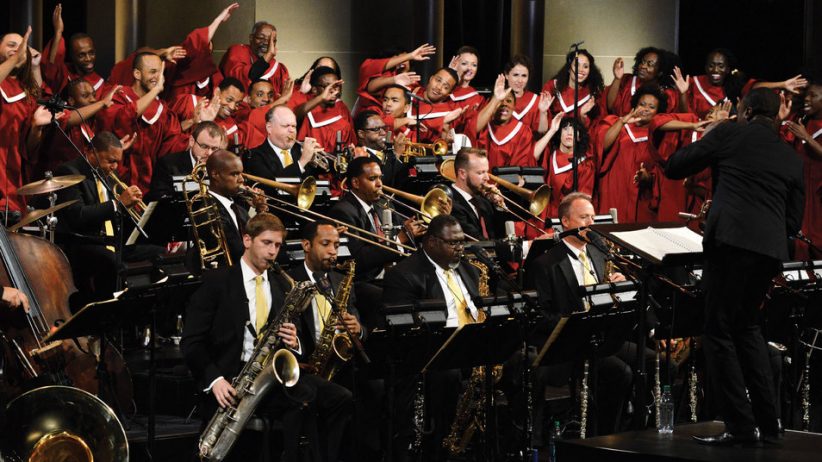 If you’ve ever been privy to closed-door conversations between jazz concert producers, musicians and others involved in facilitating live improvisational art, you know how dishearteningly unromantic that dialogue can be. The music business is a business, after all, and when it comes to touring, the tighter the reins the better. To say it another way: The reason you might be seeing a trio instead of a quintet has more to do with room rates than with philosophies about open harmonic space.

Unless, of course, you’re Wynton Marsalis, the trumpeter, composer, arranger and artistic director of Jazz at Lincoln Center. In October, Marsalis and his JALC Orchestra, along with the 70-person gospel choir Chorale Le Chateau, completed a 16-city tour performing the trumpeter’s Abyssinian Mass-an actual American tour, as in one that slogs through the South and Midwest, as opposed to a jazz tour, which means playing a handful of dates on the East Coast before flying to California to play a few more. In a post on a New York Times blog, a JALC source projected the cost of the tour to be at least $2 million, an estimate that seems low well before you start crunching numbers in your head. The tour wrapped with a three-night run at the orchestra’s New York City home base. As witnessed on the program’s final night, Oct. 26, Abyssinian‘s ambition and scale would have impressed even if it were a one-off.

There was, before a note was sung, a visual appeal whose magnitude relied on sheer numbers. In Jazz at Lincoln Center’s main room, the Rose Theater, the orchestra took its usual center-stage plot, surrounded by those 70 singers in red robes. Chorale Le Chateau conductor Damien Sneed was posted in front of the whole enterprise; Marsalis occupied his usual modest spot in the trumpet section, entering so uneventfully a greenhorn could have mistaken Sneed for him.

Marsalis first performed Abyssinian in 2008, and composed it to honor the 200th anniversary of Harlem’s Abyssinian Baptist Church. Then, it featured that institution’s choir as opposed to Sneed’s assemblage of New York-based professionals and promising students. (If you were expecting a community sort of choir, Sneed’s group came off like ringers-especially certain soloists, such as Djore Nance, whose falsetto sliced the air.) The composer shaped his work in the narrative image of a proper Baptist mass, with intimations of masses from the classical canon. Conceptually, jazz-gospel fusion is a shoo-in for Marsalis and his institution, and this certainly wasn’t his first go-round: You might recall In This House, On This Morning, his blues-based metaphor for the African-American church service from 1992. Jazz fans will recognize in Abyssinian longstanding bullet points of the JALC ethos: the blues; swing; the call-and-response tradition; the black experience, including the church, as a wellspring for uniquely American art; the cosmopolitan wilds of Ellingtonia (complete here with Eastern evocations). Like Duke, ground zero for sacred-jazz exercises this grand, Marsalis achieves in his ensembles a playful polyphony and a pliable sense of swing within finely wrought arrangements. There was more smeary, spirit-raising muted brass here than Cootie Williams could have asked for.

But there was also a good deal of invention, or at least things that Marsalis does particularly well. For one, the JALC Orchestra’s feel for New Orleans dirges and two-beats was typically peerless. And in terms of arranging, Marsalis’ knack for stark yet seamless contrast was prominent: His use of vocal-to-instrumental dialogue, for example, reiterated old wisdom about good jazz soloing and its grounding in the human voice. At certain points, like the musical non sequitur that found Marsalis soloing fluidly atop midtempo postbop, jazz seemed to break down the doors. But often, he brought jazz to church in terms of technical finesse, whether urging the choir through headlong unison lines that looked at once to bop and baroque or writing in quirkier clapped rhythms. (On the more vintage-gospel-sounding rave-ups, clapping became an exercise in choreography as well as rhythm.)

Away from the music, there was a question of intent, the idea of musical virtuosity eclipsing the text’s worshipful refrains. It did, and the audience, diverse in terms of age and race, mostly observed through this very long program (two and a half hours, with intermission). A sermon by Abyssinian’s famous pastor, the Reverend Calvin O. Butts III, exploded the fourth wall. He talked, briefly, about the boundless strength of prayer, and encouraged audience neighbors to high-five one another. This wasn’t the sort of sermon, or church service, you could nod off to.

When you’re on TV, everybody knows you, or at least thinks they know you. Take Kevin Eubanks, who was on NBC’s Tonight Show five nights … END_OF_DOCUMENT_TOKEN_TO_BE_REPLACED

Jimmy Katz leads many lives. He is the preeminent currently active jazz photographer, and has shot more than 200 magazine covers and over 600 recording … END_OF_DOCUMENT_TOKEN_TO_BE_REPLACED

Take a look at Blue Note Records’ release schedule for 2022 and it’s hard to miss the significant percentage of electronic-oriented music. In March, the … END_OF_DOCUMENT_TOKEN_TO_BE_REPLACED