Skip to content
Become a member and get exclusive access to articles, live sessions and more!
Start Your Free Trial
Home > Features > The Brilliant Life & Tragic Death of Thomas Chapin 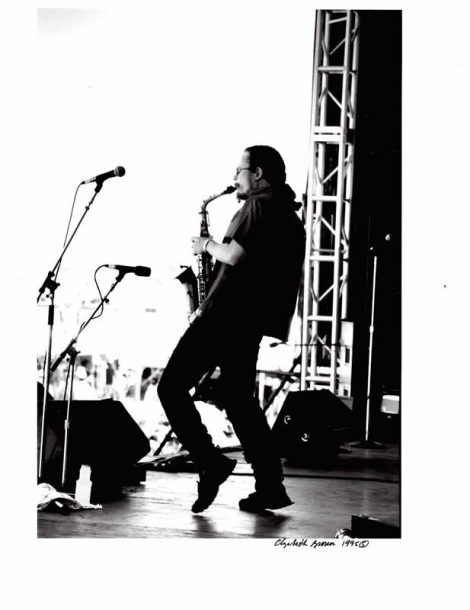 When multireedist Thomas Chapin died of leukemia in 1998 at the age of 40, he was already considered by some to have fundamentally expanded the boundaries of the jazz discourse. Yet Chapin’s untimely death came right as he was beginning to break down the barriers of genre and reach a wider audience. A new documentary, Night Bird Song: The Incandescent Life of a Jazz Great, the first full assessment of Chapin’s life and work, seeks to broaden that audience and preserve his legacy.

“Coming from an old-school straight-ahead background, it was amazing to see [Thomas] grow in so many new directions during his short life,” says Dave Douglas, who performed with Chapin in the Walter Thompson Orchestra. “He was an important figure at a time of rapid change.”

As divisive polemics roiled the scene in the early ’90s, Chapin represented a challenge to the dichotomy of Jazz at Lincoln Center and cutting-edge outposts like the Knitting Factory, where much of the documentary takes place. Chapin countered the notion that avant-garde musicians had skipped the rudiments and scoffed at tradition-he served as lead alto saxophonist and music director for the Lionel Hampton Orchestra from 1981 to 1986-and lived in a state of limitless possibility. “You step out onto the stage and you’re all alone, and you don’t know what’s going to happen,” he says in the film’s first seconds. “I don’t know what I’m going to do. And I like that.”

The 150-minute film, directed by Emmy-winning documentary filmmaker Stephanie J. Castillo, Chapin’s sister-in-law, captures Chapin’s frenetic spontaneity. Castillo culled the soundtrack from more than 200 live and studio recordings, a piercing counterpoint to the 47 interview subjects, including childhood friends, relatives, mentors and collaborators. In lieu of voiceover narration, Chapin effectively wails through his story himself. “I could piece the story together without a narrator, and I think that makes the film more powerful,” Castillo says. “The music was driving my editing.”

The film traces the parallel trajectories of Chapin’s career, which saw him outfitted in a tux with Hampton, then a beanie and colorful sleeveless shirt with his own bands-eclectic, explorative groups that had little in common but Chapin himself. He was perhaps best known for the Thomas Chapin Trio, with bassist Mario Pavone and drummer Steve Johns, then later Michael Sarin. “It dawned on me after a short time that [Thomas] was writing this music somehow thinking of big band for trio,” Pavone says in the film.

In 1986, Chapin left the relative security of Hampton to strike out on his own. He became the first artist signed to Knitting Factory Records, an offshoot of the eponymous Downtown hub. At New York’s Grand Central Terminal, he had an avant-garde meet cute with Terri Castillo, whom he eventually married. After touring throughout Europe, Chapin amassed a large following in the Netherlands, appearing several times at the North Sea Jazz Festival. He recorded more than 15 albums as a leader, including the jangling riffs of Insomnia, the plaintive Sky Piece and the straight-ahead You Don’t Know Me.

The film also explores Chapin’s multifaceted artistic persona, as collagist (he designed much of his own album art), poet and exhaustive self-chronicler. In addition to the interviews, Castillo mined the Chapin archive at Duke University, consisting of more than 28,000 items that provide vivid insight into Chapin’s artistic process and the evolution of the Downtown scene. “I asked Terri, ‘Why did Thomas keep all this stuff?'” Castillo says. “And she said, ‘He told me it was for his biographer.'”

After a curtailed trip to Africa, Chapin was diagnosed with leukemia in 1997. Despite the grim prognosis, Chapin married Terri Castillo later that year, in October, and the film includes poignant footage of the wedding. A benefit at the Knitting Factory was followed by a hometown event on Feb. 1, 1998, at Cheney Hall in Manchester, Conn.

In the most tear-jerking moment of the film, Chapin makes an unexpected appearance at the Manchester benefit, frail from the ravages of chemotherapy, and musters the energy to perform “Aeolus,” a composition for flute dedicated to the Greek wind god. “He had said, ‘I just want to play one last time,'” his wife recalls in the film. He died on Feb. 13, 1998, only 12 days after the performance.

Yet the film doesn’t end on an elegiac note. Beyond the grief of the Downtown scene, Castillo charts the numerous Chapin tribute albums and posthumous releases that followed, as well as interviews with the next generation of artists who were inspired by him. It concludes with an uninterrupted clip of the Chapin trio’s effervescent performance of “Night Bird Song” at the 1995 Newport Jazz Festival. “I knew that was how I wanted to end the film,” Castillo says. “I felt that after two and a half hours of watching his story, the audience was just going to want to see him play.”

When you’re on TV, everybody knows you, or at least thinks they know you. Take Kevin Eubanks, who was on NBC’s Tonight Show five nights … END_OF_DOCUMENT_TOKEN_TO_BE_REPLACED

Jimmy Katz leads many lives. He is the preeminent currently active jazz photographer, and has shot more than 200 magazine covers and over 600 recording … END_OF_DOCUMENT_TOKEN_TO_BE_REPLACED

Take a look at Blue Note Records’ release schedule for 2022 and it’s hard to miss the significant percentage of electronic-oriented music. In March, the … END_OF_DOCUMENT_TOKEN_TO_BE_REPLACED