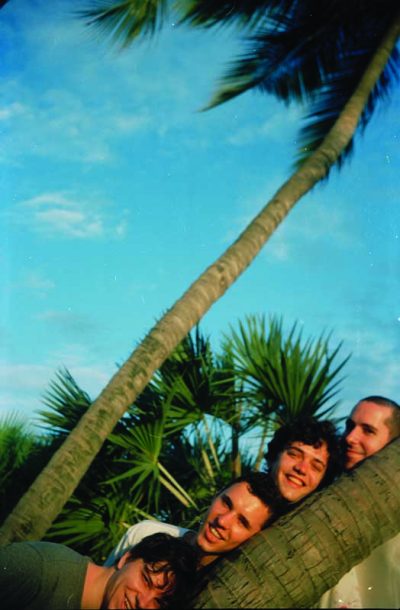 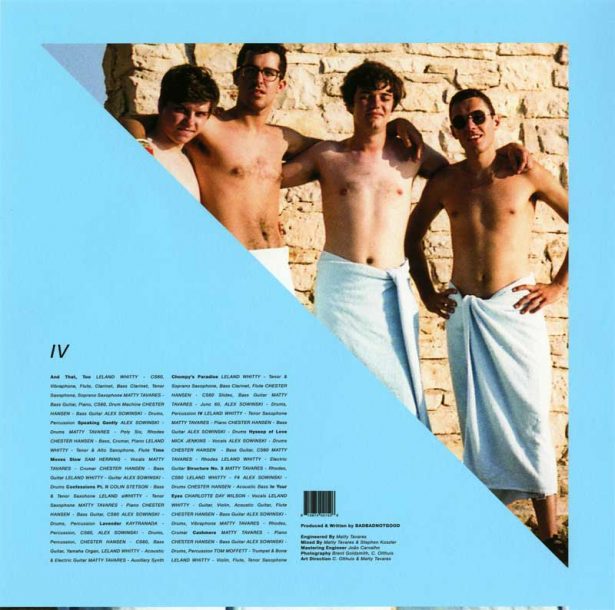 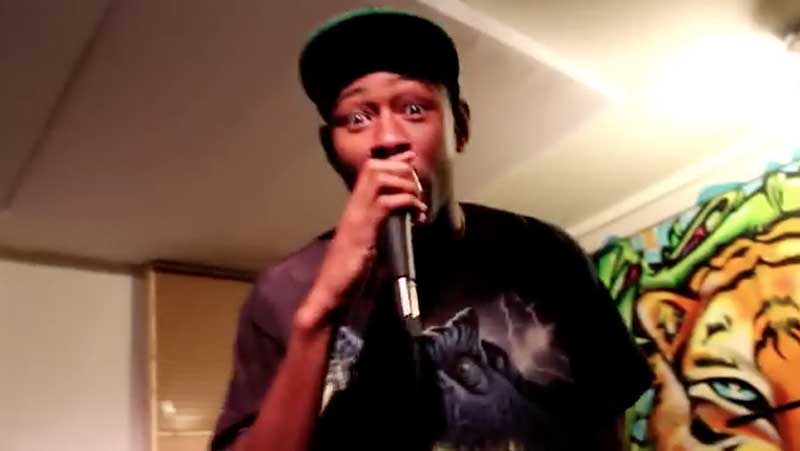 Tyler, the Creator (from BBNG viral video in 2011) 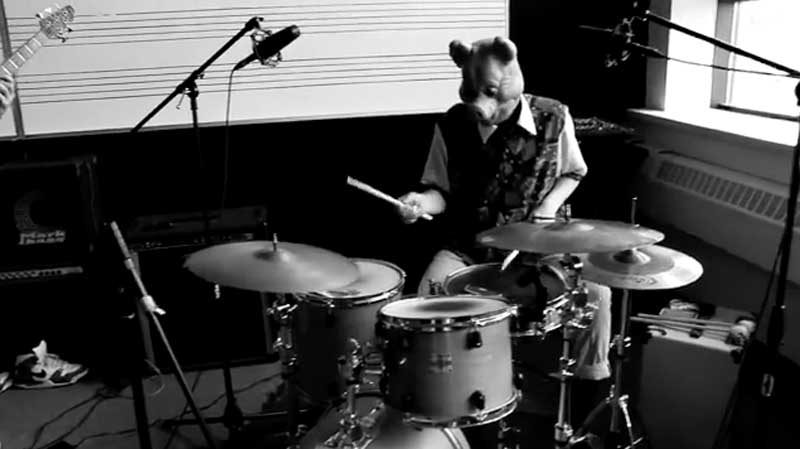 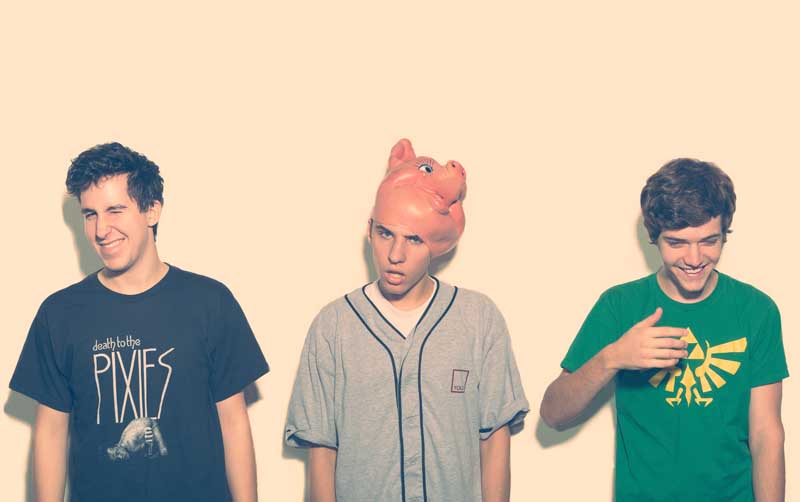 BBNG original trio (photo courtesy of the artist)
It was nearly 8:30 on a Tuesday night in late September, and the sold-out crowd at the Theatre at Ace Hotel in downtown Los Angeles … END_OF_DOCUMENT_TOKEN_TO_BE_REPLACED

It was nearly 8:30 on a Tuesday night in late September, and the sold-out crowd at the Theatre at Ace Hotel in downtown Los Angeles was restless. With confirmed (Bilal, Sa-Ra Creative Partners) and unbilled (George Clinton, Kamasi Washington, the Gaslamp Killer) acts slated for the stage, the evening was shaping up to be a long but momentous one. British deejay Gilles Peterson had selected the bill and violist Miguel Atwood-Ferguson, one of the most in-demand arrangers and composers of the tight-knit L.A. beat scene, was at the helm of a 13-piece jazz orchestra. The Canadian quartet BadBadNotGood—Leland Whitty on saxophones, guitar, violin and vibraphone; keyboardist Matty Tavares, subbed out for the night; Chester Hansen on bass; Alexander Sowinski on drums—was tasked with opening the show.

Whitty, a recent fulltime addition to the band, strode out in his best spring-break wardrobe and began to blow the Norah Jones hit “Don’t Know Why” on his tenor. The group played it slow and straight without solos, a suitable cruise-ship stroll. When the song was over, the crowd clapped politely, a little confused but fairly accepting that these four young men were going to sling some cheese until the main acts were ready. Instead they delivered a beating, unleashing blazing saxophone solos and a road-tested rhythmic ferocity on the 1,600-strong audience. Between tunes, Sowinski, wearing a T-shirt promoting a mythical Cubist basketball team called the Picasso Bulls, offered frenetic banter. By the end of the set, people were hollering at the stage for more. BBNG had blown a few minds and befuddled a few others. The parade of stars could now proceed until the early morning.

The oldest member of BBNG was 11 when “Don’t Know Why” hit the airwaves in 2002. The band found its own left-field success five years ago through a viral video, a trio recording of a handful of hip-hop tunes—including Gucci Mane’s “Lemonade” and Tyler, the Creator’s “AssMilk”—filmed in a classroom at Toronto’s Humber College, which all four current members attended. This is not how they generally tell you to achieve success in jazz school.

“In its early days, [Humber College] was the only place in Canada that offered jazz education—albeit a three-year diploma, which did not transfer as college credit—but tons of excellent young musicians came here because of the top-notch faculty,” noted Denny Christianson, Humber’s director of music. But no one in BadBadNotGood has made it to graduation yet. Instead, as the band’s lore presents it, the project recorded by Tavares, Hansen and Sowinski was deemed by their instructors to have “no musical value.” Thus, they posted it online for those outside of academia to critique.

The video, titled “The Odd Future Sessions Part 1,” consists of shaky, high-contrast black-and-white footage, and the performance is brash, driven by Tavares’ hammering right hand. The pianist wears shorts and a T-shirt; Hansen has his hoodie up; Sowinski plays in a pig mask. BBNG from its inception has embraced its role as jazz brats—a subspecies of the critic Nate Chinen’s whooping jazzbros—displaying minimal interest in the restraints of tradition and seeking something a little more blunt and often goofily sophomoric.

“I am sure I speak for the Humber music community when I say that we are happy for their success,” Christianson said. “As to the ‘no musical value,’ I would suggest that this was the assessment of one person, and should be taken into the context that [throughout] the history of all natures of art there have been countless examples of disagreement of opinions. As we know, the group has already proven to themselves that their music has a solid fan base. I am happy for them and wish them every measure of success.”

“Meet great people, have fun, do creative shit.” Sowinski outlined his philosophy while seated on a couch in the warehouse headquarters of Innovative Leisure, the Los Angeles-based record label that BBNG calls home. It was the day before the Ace Hotel show and the band was between rehearsal and tacos.

Hansen expanded upon that ethos by pointing out what has always worked for the band. “The first time we ever recorded ourselves, and the third time we ever jammed, was our first YouTube video, and [Tyler, the Creator] ended up checking it out and posting about it. Everything we did after that was just, ‘Oh, I guess some people are into this and it’s really fun. Let’s keep jamming.’ Everything we do is something we enjoy and a good time.”

Shortly after the video was posted, Tyler arrived in Toronto on tour, and stopped by Sowinski’s parents’ house to collaborate with the band on an impromptu jam. In it, BBNG lays down a steady groove as Tyler’s raps become increasingly menacing and transgressive, eliciting a “Did he just say that?” response from the average listener. “I thought it was hilarious,” Sowinski recalled. “You just kind of enjoy what’s going on. I was pretty excited to just be playing with a rapper in my basement.”

Tyler, the Creator is the leader and cofounder of Odd Future, the Los Angeles-based alternative hip-hop collective whose explosive popularity helped expose BBNG to a world of young fans averse to categories of genre, race or fashion. In 2012, BBNG served as a house band for the Coachella Valley Music and Arts Festival, which included backing R&B singer-songwriter Frank Ocean, an Odd Future member, in the midst of his breakout. Later that year the group contributed to the soundtrack for the flamboyant martial-arts film The Man With the Iron Fists, directed by Wu-Tang Clan producer RZA. Within months of the “Odd Future” upload, these middle-class college undergrads from Canada were one of the most in-demand live bands in hip-hop.

The Montreal International Jazz Festival featured more than 800 acts in the summer of 2015, but acclaimed Wu-Tang Clan rapper Ghostface Killah’s show at the Métropolis theater, with BBNG backing, drew perhaps the most youthful crowd of the fest. Funnily enough, the show, in support of the three-years-in-the-making collaboration Sour Soul, almost didn’t happen. Ghostface was held up at the airport, having flown in from Europe that afternoon. BBNG was fully assembled and ready to take on the house. In cinematic fashion, Ghostface showed up late but ready, wrapped in an oversized Phillies jacket, and a full set was delivered to the raucous crowd. Though BBNG had very little room for improvisation within the structure of the tunes, the players did showcase their ability to convincingly recreate riffs by the likes of Barry White and Isaac Hayes. Any limitations they faced were overcome with sheer energy.

But from the beginning BBNG has cut a wider swath stylistically than its hip-hop associations might imply. The band occupies a space shared between improvisation, electronic dance music, mosh pits and cocktail hour; among the covers on its first two studio releases is material by Flying Lotus, Joy Division, Feist and My Bloody Valentine. The band’s 2014 release, III, was its final album as a trio and first with all original compositions. More piano-focused, the album evokes ’70s groove-jazz recordings that embraced electric bass, a stronger backbeat and the crispness of pop production. “Kaleidoscope” is a grungy womp with Sowinski cutting loose on the toms, while “Hedron” is a slow-burner highlighting Hansen’s patient basslines. “Confessions” is Whitty’s spotlight, the band minimally supporting the then-guest saxophonist’s motif before he is free to fly around Hansen; it’s a standout track and a glimpse of the future. “Everyone is doing more things individually, which helps gives us fresh perspectives,” Sowinski said. “Pursue different lanes and try to connect. Now with this love of songwriting, we’re pushing it further. We’re starting to explore tons of different avenues.”

On the latest release, IV, BBNG is officially a quartet. The addition of Whitty on horns and strings broadens the range of influences considerably, and gives the band a dominant solo voice that it uses extensively. Tunes like “Speaking Gently” and “IV” feature screaming tenor solos, reminiscent of CTI-era burners from Joe Henderson and Joe Farrell. The latter tune closes with Whitty working through baroque lines in even, repetitive clips. It is hypnotic and powerful, a lulling acrobatic riff. But it didn’t come easy.

BBNG was deep into crafting IV before deciding to scrap everything. With help from producer Frank Dukes, the band built a studio in Toronto, starting from scratch on their home turf and recording their featured artists in-house as they passed through town. “I think there were lots of reasons we weren’t happy,” Whitty said. “We rented a studio for a few days but everything we used for the album was recorded in our studio. We knew that we needed to take some more steps, to dive in and find the concept of the record.”

The album boasts a considerably more homed-in attack with a focus on songcraft, bouncing between instrumental jams and stellar guest appearances from the likes of Future Islands’ Sam Herring, rapper Mick Jenkins, vocalist Charlotte Day Wilson and saxophonist Colin Stetson. Aside from the twinkling landscapes of Nintendo’s resident composer Koji Kondo and Vangelis, the band cited the work of numerous Brazilian artists of the 1970s for inspiring this latest direction, in particular composers Arthur Verocai and Erasmo Carlos. “Brazilian jazz can be very complex but so smooth and fearless,” Sowinski said. “Those signature feelings and ideas harmonically are so unique and beautiful. That was a big inspiration. We found such a love of songwriting, even though we don’t sing.”

For their parts, Herring and Wilson dig deep into a Philly-soul spirit on “Time Moves Slow” and “In Your Eyes,” respectively. Herring’s guest spot in particular is a welcome display of restraint that lets the ballad simmer into seduction. Wilson’s performance hangs her vibrato over fluttering flutes and a choir of female voices indebted to the Fifth Dimension. Whitty’s guitar work adds some laidback flair on both. On “Chompy’s Paradise,” his multiple woodwinds hover over the rhythm section’s clip-clop crawl, summoning up the grandiose production of the Philadelphia sound, and the band transforms into CopacaBadBad on the sand-swept “Cashmere.” It’s a syrupy dessert to close out the album, sweet beyond expectations.

The most forceful guest is Colin Stetson, who conjures a hive of aggravated bees on his bass saxophone. “We had a two-day session with Colin, and a lot of that time was spent basically freeform jamming all in the same room. ‘Confessions Pt. II’ came from one of those jams,” Hansen said, referring to a pummeling disco workout.

“They have a stellar work ethic and they’re really no nonsense about it all,” Stetson wrote in an email. “Obviously, whenever younger musicians attain heights of recognition, the go-to headline is always how ‘gifted’ they all must be, but honestly, ‘gifts’ or no, the folks who are successful tend to be the ones who are working harder than everyone else, and this is especially true for these guys. In and out of the studio, they’re in it with a love and appreciation for the music, and the ambition to see it through.”

Less than a week after the Los Angeles gig, BBNG opened for the Red Hot Chili Peppers in the 17,000-seat Palau Sant Jordi in Barcelona, Spain. Later that month, Snoop Dogg sampled “Lavender,” a collaboration with producer Kaytranada from IV. Not bad, not bad.