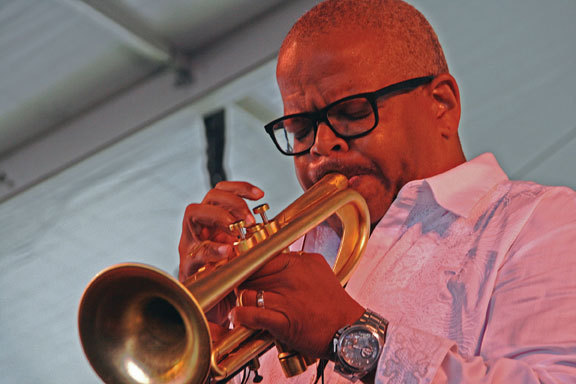 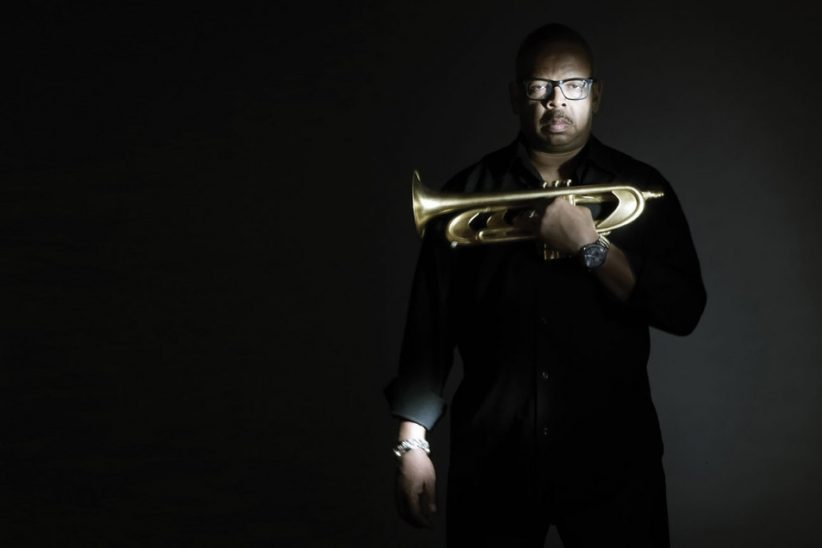 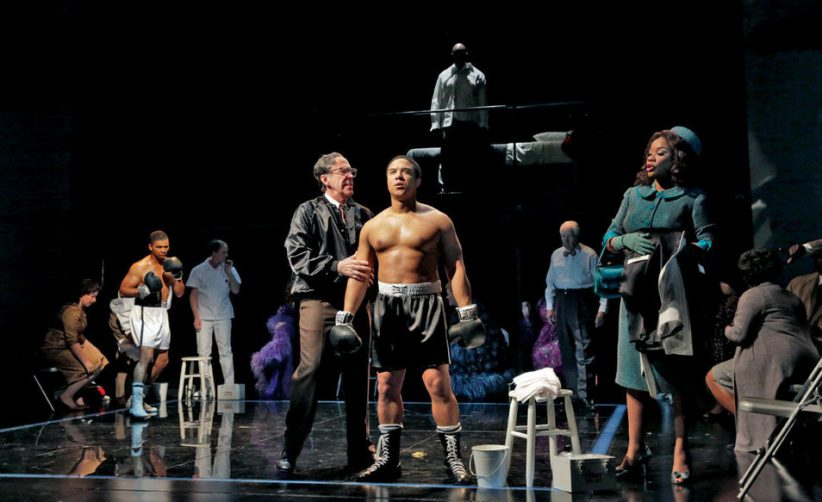 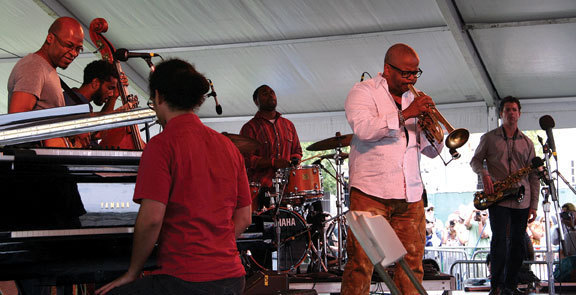 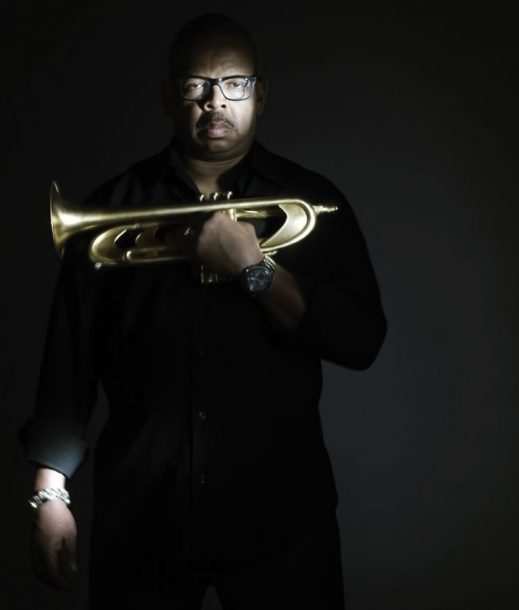 As 2012 turned into 2013, trumpeter-composer Terence Blanchard, then 50, was juggling the following: composing Champion, his first-ever opera; recording Magnetic (Blue Note), his first album in four years; and serving his second academic year as artistic director of the Henry Mancini Institute at the Frost School of Music at the University of Miami. The album was released on May 28, three weeks after classes ended in Miami and just as the opera was going into rehearsals for its June 15 world premiere in St. Louis, Mo. As soon as the opera ended its two-week run, Blanchard left with his quintet for Europe. They were back in the States by August for the Newport Jazz Festival and a tour to showcase the new record.

Onstage at Newport, Blanchard wore a thin moustache, a half-buttoned white shirt and tie-dyed gold pants. His current quintet was supplemented by alumnus Lionel Loueke, and the tall, lean African coaxed animal cries from his guitar over Fabian Almazan’s quiet piano chords to introduce “Hallucinations,” a song from the new album. Blanchard and tenor saxophonist Brice Winston soon articulated the main theme: a melancholy elegy that spun off into an intense trumpet solo, full of punctuated cries that hinted at both anguish and anger over Kendrick Scott’s drum rumbles. The tune’s dark, knotty sound contrasted with the setting: a white canvas tent in the middle of a green field inside a gray-stone, 19th-century fort.

For the final number, Wayne Shorter’s “Footprints,” the quintet was further supplemented by Herbie Hancock, who had halted his car to the airport while passing the stage; impulsively, he climbed out and marched to the piano. Backstage afterward, Blanchard laughed about Hancock’s unexpected appearance: “He always does that, standing on the side of the stage, looking at you like, ‘C’mon and get your ass whipping. You might as well get it over with. I’m not going to be that rough on you.'”

Blanchard seemed tired but elated. He was enjoying the reunion with Hancock almost as much as the chance to play the album’s strong new tunes in a live situation. Moreover, he had recently received news that several other opera companies were interested in possibly staging Champion. Former band members such as bassist Derrick Hodge stopped by to ask about the opera and the Mancini Institute

Why would anyone willingly shoulder a workload like Blanchard’s? Well, if you’re a composer who declares you’re always looking for new challenges, you can’t back off from a challenge just because it comes at an inconvenient time. Doors open only briefly, and you have to slip through them before they’re locked again-especially when the opening triggers as many personal echoes as the opera offer did for Blanchard. “I grew up hearing opera because of my father,” he explains, “who was an operatic baritone, an amateur. When he was 18, he was one of the Harlem Harmony Kings, a barbershop quartet that sang around New Orleans; that led to church recitals and eventually opera. He was part of this interesting group of African-American men in New Orleans who studied opera. They got together every Thursday to rehearse, even though they could never do it professionally due to the discrimination at the time. So I heard a lot of opera as a kid. I was intrigued by it, but for all the wrong reasons. I wondered why these men were into this music when none of my friends’ parents were into it.”

The opera commission resulted from an unusual collaboration between the Opera Theatre of Saint Louis and Jazz St. Louis, two of Missouri’s top cultural organizations that usually advocate for different musical traditions and reach out to different audiences. Seeking a way to combine forces, the two groups explored the possibility of a new opera from a jazz composer. That inevitably led to Blanchard, whose film-score résumé includes award-winning work with Spike Lee and George Lucas. Even though he knew he needed to make a new album with his quintet, even though he was teaching (with Hancock and Shorter) at the Thelonious Monk Institute and would soon move to the Mancini Institute, he couldn’t say no to an offer like that. But what would make a good story for a jazz opera?

“I’ve been a big fight fan for years,” Blanchard says, “and I had always found Emile Griffith’s story really compelling. Here was a guy who was the sweetest guy on the planet, who killed a man by doing what he was trained to do. He was trying to find forgiveness for that while struggling with his sexuality.” During his welterweight championship rematch with Benny “The Kid” Paret, televised by ABC from Madison Square Garden on March 24, 1962, Griffith battered the champ so hard that Paret died from the injuries 10 days later. Nine years later Griffith himself was beaten to a pulp after exiting a gay bar in Midtown Manhattan. “There’s a line in the opera that sums up the story,” says Blanchard. “‘I killed a man and the world forgave me/I loved a man and the world wants to kills me.'”

When Blanchard brought the idea to the Opera Theatre’s James Robinson and Jazz St. Louis’ Gene Bradford, they were enthusiastic and quickly invited Pulitzer Prize-winning playwright Michael Cristofer (The Shadow Box) to write the libretto. While Cristofer wrestled with Griffith’s story, Blanchard gave himself a crash course in opera music, with help from his longtime composition mentor Roger Dickerson, on how to write for voice via recitative, arias, duos, trios and quartets. “Opera and jazz are niche markets in any city-they rarely overlap or collide,” concedes Robinson, “so this was exciting. Doing Champion enabled us to open our ears to something new and different, and it challenged the singers in ways they have never been challenged. But it also gave Terence a wonderful new canvas on which to try out his amazing talents. … My hunch is that many of our core audience members are now downloading jazz and some first-time opera-goers are now taking a second look at what we offer.”

“I was impressed at the increased diversity I saw in the audiences,” adds Bradford, “and knew that was a result of the jazz element. I was also pleased to see many opera patrons viewing jazz in a new light. … Champion opened a dialogue that will continue for years.”

“I remember telling the singers during the early workshops that this was the first time I was doing this, and I needed their help,” Blanchard recalls. “I was met with a lot of blank stares, because they weren’t used to giving advice to a composer-Verdi had never asked for their suggestions. Once they got used to it, though, they helped me a lot. For example, to sing in the upper register, there’s a certain ramping-up that’s necessary. They have to take a deep breath; they have to have time to get the words out. In other words, don’t overdo it. I learned so much.”

In its near-century of excellence, The New Yorker has been home to more than its share of tops-in-their-field contributors. There’s E.B. White, with his luminous … END_OF_DOCUMENT_TOKEN_TO_BE_REPLACED

Put a “the” in front of a name and it acquires historical heft. The Thelonious Monk who entered New York City’s WOR Studios as Halloween … END_OF_DOCUMENT_TOKEN_TO_BE_REPLACED

On the enchanted evening of August 16, 1958, Ella Fitzgerald took to the stage of the legendary Hollywood Bowl. There, with a lustrous orchestra conducted … END_OF_DOCUMENT_TOKEN_TO_BE_REPLACED

Be careful what you wish for.  By the beginning of 2020 guitarist Mary Halvorson, one of the most acclaimed musicians of her generation, was also … END_OF_DOCUMENT_TOKEN_TO_BE_REPLACED