Skip to content
Become a member and get exclusive access to articles, live sessions and more!
Start Your Free Trial
Home > Features > Tarbaby: Back to Basics 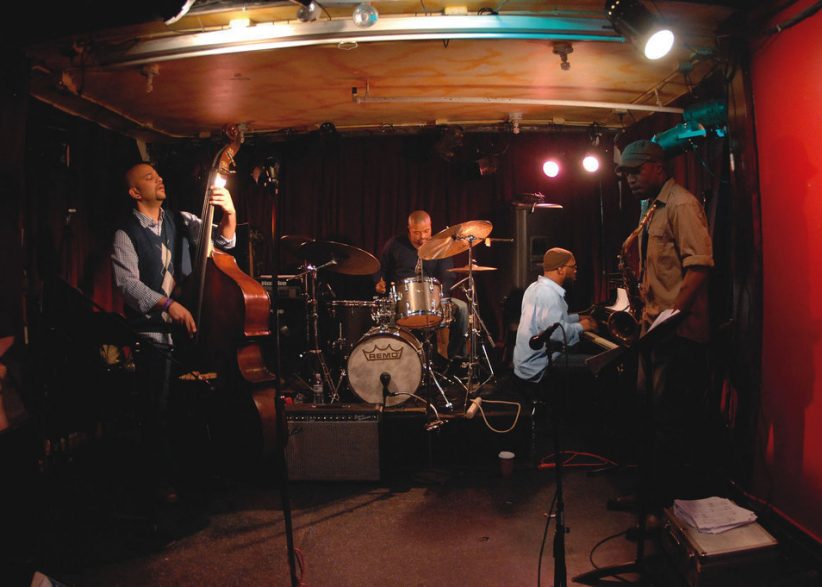 I don’t want to hug the tar baby …” With these words, sampled and spliced into a hip-hop montage, Tar Baby’s eponymous debut begins. The voice belongs to the late Tony Snow, press secretary for the Bush White House, who used the term from the Br’er Rabbit folk legend as a metaphor for getting lured into a rhetorical trap. It’s vaguely provocative-some would say racially charged-and yet the members of Tar Baby don’t intend the band name as a political statement. As tenor saxophonist Stacy Dillard puts it, “The name is based on musical experiences and observations.”

Bassist Eric Revis elaborates: “In the story, the tar baby is something you don’t want to attach yourself to. And it seems to me there are elements of jazz that a lot of people don’t want to attach themselves to: the idea of swinging, playing with conviction, with reckless abandon. Everything now tends to be very pensive and ‘interesting.’ An exercise in the math of music. None of us are about that.”

For drummer Nasheet Waits, Tar Baby speaks to the need for musicians to engage the full sweep of jazz tradition, not focus narrowly on what’s current. “The best players have a firm sense of history,” he says. “That’s why they’re able to walk their own path. There’s a cultural message that I think is being lost today, with the younger generation not referencing certain elements that are key to making jazz strong, making it what it is.”

Although Tar Baby found a home on pianist Orrin Evans’ Imani label, the band is a co-led collective, with Evans, Revis, Dillard and Waits at the core. J.D. Allen, also on tenor, has since decided to focus on his own work as a leader. But the three Allen compositions on the disc, including the mysterious title track, will remain in the book, and Allen is still spoken of as an honorary member. “It’s not a parochial view of a group,” says Waits, noting the two guest appearances by vocalist TC III. “We’re always open to change. The band can always augment itself, and that was the vision.”

After the opening intro, the quintet offers a heated, to-the-point reading of Don Cherry’s “Awake Nu,” a clear statement of interest in the free-jazz continuum. Revis and Waits have explored these modalities in a trio with the iconic Peter Brötzmann. And yet Tar Baby’s sound is largely tonal, wide in range, from the dark, loosely flowing 6/8 of Allen’s “Being in Nothingness” to the agitated funk motifs of Evans’ “Iz Beatdown Time” and the shuffle groove of “Psalm 150-2,” by Philadelphia organ legend Trudy Pitts.

Revis’ tricky, swinging “O,” named for Evans, might call to mind the Branford Marsalis Quartet, in which Revis has played for years. Another version appears on Laughter’s Necklace of Tears, the bassist’s new album, also featuring Evans and Dillard. “The tune pretty much describes Orrin,” Revis offers. “It’s ‘simply complex,’ you know, with this earth-visceral thing but also this sophisticated thing that’s in there.”

Asked about his and Allen’s respective approaches on tenor, Dillard cuts to the chase: “The one playing crazy is me. The one with the sweeter tone, that’s J.D.” Both saxophonists hail from Michigan, but Dillard, the youngest of the group at 31, wasn’t aware of that connection when he first heard Allen, an experience that “took me onto a whole different page musically,” he says. When Tar Baby formed, he recalls, “they suited me up, took me in like a little brother, and here we are.”

Tar Baby comes in at a concise, perhaps even brusque 33 minutes, yet it seems very much a rounded and complete narrative, harking back to pre-CD days when albums were necessarily shorter. “Some of the greatest music ever made in jazz is like three minutes long,” Revis contends. “I think that phase [long tunes, long albums] served its purpose, but we’ve gone through the exploration thing. Now, at least for me, it’s time to start whittling all this stuff down and getting to the essence of something.” Bolstering the point, Waits fondly recalls the advice of an old mentor: “Get to your shit quick.”

That’s not to say the band won’t stretch when the live setting calls for it. At New York’s Winter Jazzfest in January, Tar Baby sounded more exploratory and supple-more like a band-than Jeff “Tain” Watts’ star-studded quartet across the street with Branford Marsalis, Terence Blanchard and Christian McBride. Another Tar Baby studio effort is under discussion. “I’ve been at the drawing board quite a bit and I’ve got material ready,” confides Dillard. Waits plans to contribute as well. “We all have equal input,” the drummer says. “There’s strength in numbers, that’s our motto. It’s all about ‘us’ and ‘our.'”

When you’re on TV, everybody knows you, or at least thinks they know you. Take Kevin Eubanks, who was on NBC’s Tonight Show five nights … END_OF_DOCUMENT_TOKEN_TO_BE_REPLACED

Jimmy Katz leads many lives. He is the preeminent currently active jazz photographer, and has shot more than 200 magazine covers and over 600 recording … END_OF_DOCUMENT_TOKEN_TO_BE_REPLACED

Take a look at Blue Note Records’ release schedule for 2022 and it’s hard to miss the significant percentage of electronic-oriented music. In March, the … END_OF_DOCUMENT_TOKEN_TO_BE_REPLACED