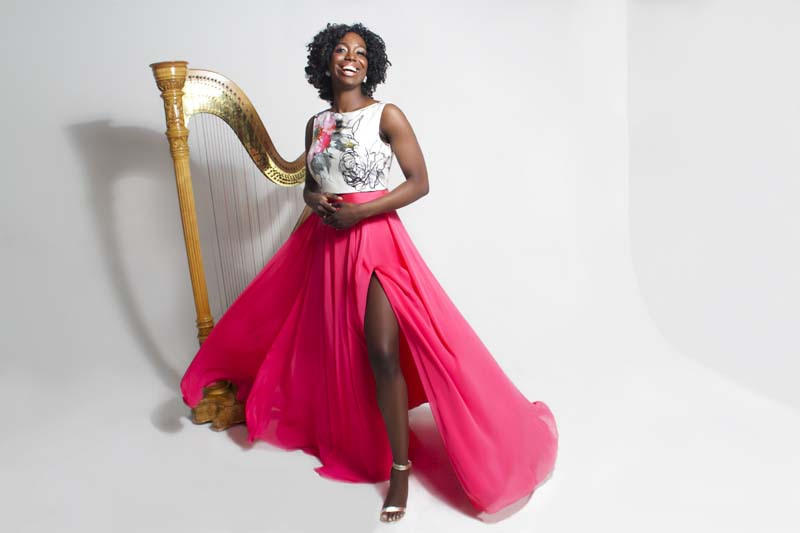 It’s well after midnight in the studios of KBOO radio in Portland, Ore., and harpist Brandee Younger is gamely answering questions from host Daniel Flessas. At one point, Flessas remarks that whenever there’s a need for a harp, it seems Younger gets the call. “That’s about right,” the 32-year-old musician replies with a laugh. It’s not much of an exaggeration for an artist who, in addition to leading her own groups, has performed with Jack DeJohnette and Charlie Haden and recorded with such pop/R&B superstars as John Legend, Common and Drake.

Younger was in town to help the PDX Jazz Festival pay tribute to John and Alice Coltrane, part of the fest’s two-week series of concerts and events in February. Saluting the former has been de rigueur in jazz programming, the latter much less so. For her part, Younger has been paying tribute to Alice Coltrane almost since she started on her instrument as a tween, studying classical music on Long Island.

On Feb. 27, at the Newmark Theatre downtown, she performed as part of a concert of Alice’s music, directed by Ravi Coltrane and also featuring Pharoah Sanders, Geri Allen, Reggie Workman, Andrew Cyrille and local tambura player Michael Stirling. The following afternoon, she gave a sold-out solo performance at another Portland music institution, the shop Classic Pianos. In a live conversation with JT at that event, Younger explained how Alice was the artist who connected her to the harp and to jazz most deeply. Hoping to inspire their daughter to stay on track with the instrument, Younger’s parents gave her a copy of an Alice Coltrane compilation. “The first track was ‘Blue Nile’ and the second track was ‘Turiya and Ramakrishna,’ and I stayed on those two tracks,” Younger said. “I thought it sounded way cooler than what I was playing-[sings] ‘Twinkle, twinkle, little star.'”

Younger became obsessed with the influential and profoundly spiritual harpist and pianist. “I would write these letters to her … but I never sent them,” she said. “When I got to [the Hartt School of Music in Hartford] I met Jackie McLean and I said, ‘Mr. McLean, I need to meet Alice Coltrane.’ Same thing in high school. I met Clark Terry: ‘Hi, Mr. Terry, it’s a pleasure to meet you. Do you know how I can meet Alice Coltrane?'” Despite those entreaties she never met her hero, yet poetically enough ended up playing alongside jazz icons at her memorial service in New York in 2007. There she began developing a musical relationship with Ravi Coltrane, who had contacted her about the memorial through MySpace.

On her recent sextet album, the R&B-infused Wax & Wane, Younger also salutes Dorothy Ashby, a jazz harpist even more overlooked than Coltrane. “Dorothy Ashby made about 11 records as a leader that most people don’t know about,” Younger said. She’s quick to draw a connection between Coltrane and Ashby, though the latter chose the more commercial path. “She grew up in Detroit, just like Alice Coltrane did, and she played piano,” Younger said. “Eventually she moved to California, where she became huge on the recording scene. Bill Withers, Earth, Wind & Fire, Stevie Wonder: All those records that you hear harp on, that’s her. I think Bill Withers and Alice Coltrane are responsible for her playing ‘If It’s Magic’ with Stevie Wonder. Stevie called Alice, and she recommended Dorothy for that.”

Isolated from friends and family, with nary a gig in sight, many musicians could have spent most of 2020 in dark solitude, sequestered in their … END_OF_DOCUMENT_TOKEN_TO_BE_REPLACED

On April 19, 1952, the Gene Krupa Jazz Trio—Krupa at the traps, Charlie Ventura on tenor and bass saxophones, and Teddy Napoleon on piano—became the … END_OF_DOCUMENT_TOKEN_TO_BE_REPLACED

For drummer Willie Jones III, Fallen Heroes is more than just the name of his most recent album. The title also relates deeply to his … END_OF_DOCUMENT_TOKEN_TO_BE_REPLACED

Beloved for his many cool collaborations with Tim Berne, John Zorn, and Marc Ribot, drummer/improviser/composer Ches Smith is best served hot, under his own name—on … END_OF_DOCUMENT_TOKEN_TO_BE_REPLACED