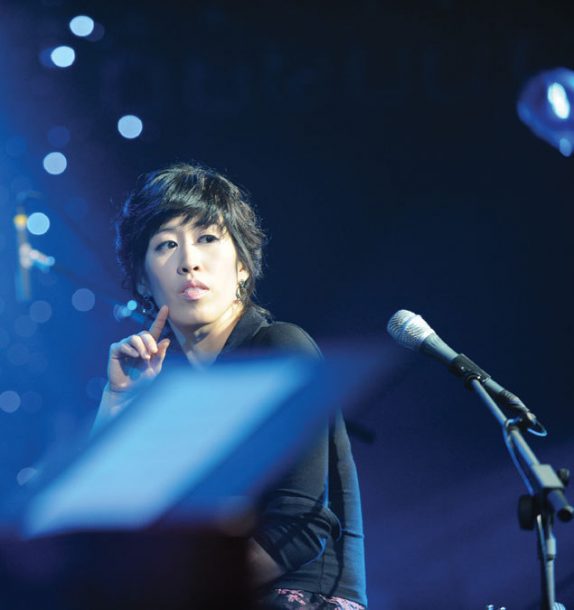 Returning to South Korea in 2007, Sunny Kim found herself a stranger in her own native land. At 28 years old, she had spent half of her life outside of the country, first in Malaysia and Thailand with her family, then in the States where she moved to study music. But despite her burgeoning success in New York, Kim decided that half a lifetime away from home was long enough.

“I was almost like a foreigner,” she recalls of her homecoming. “As a traveler, when you go to a foreign country you see what’s normal there as something to think about and analyze. You see a whole different way of being and thinking, so you question your own ways of thinking. You self-reflect. I’ve done a lot of that.”

One guide that helped Kim rediscover her place in Korean culture was U-Turning to You, a book of paintings and poetry by the contemporary artist and poet Sun Doo Kim. “When I read his book,” she says, “I felt this sense of playfulness, a very pure, very serene nature. It was what I remembered from my childhood here. I wanted to hold onto that and create something out of it.”

What she created from those feelings is her second CD, Painter’s Eye (Sunnyside), an entrancing collection of songs inspired by the work of Sun Doo Kim. Working with saxophonist Darius Jones as producer, Kim assembled a stellar ensemble to help her translate the sensations she found in the artist’s paintings and words into music.

Her collaborators include guitarist Ben Monder and bassist Sean Conly, players whose tender accompaniment delicately supports the fragile beauty of “Passing”; Chris Speed, whose clarinet conjures a flitting, singing bird on “A Tree and a Bird”; and pianist Angelica Sanchez and drummers Richie Barshay and Pheeroan akLaff, all of whom provide minimal gestures of color that contribute immensely to the overall tapestry. “The musicians surround Sunny in different permutations,” Jones explains. “I wanted to have that sparseness that you find in Korean culture, to not let the music get too cluttered. One of the things I love about Korean music is that it gets really deep into the sound of the individual instrument or vocalist, and I wanted that to come out.”

Kim echoes that sentiment when discussing the elements of Korean culture she sought to express on the album. “In Sun Doo’s painting and poetry there’s this sense of simplicity and purity and this sense of space that’s very characteristic of the traditional style of beauty,” she says. “If you look at Korean porcelain vases, they’re not fancy at all, they’re kind of raw but very refined at the same time. And when you go to Buddhist temples in the mountains, they grow their vegetables and they don’t add much spice or sauce, but you can really appreciate the fresh, subtle taste.”

That simple but refined flavor is evident throughout Painter’s Eye, from the shimmering ripples of “Bloom and Wither” to the hushed, uneasy drones of “Ink Silence.” Kim is expressive but controlled, connecting emotionally with a stark sense of constraint. “She’s a totally spiritual singer but also has a strong command of her craft,” Jones says.

Born in Seoul in 1979, Kim says she was singing before she could speak. She studied classical piano starting at age 7, and played along with Korean pop music at home. She sang in school choirs in Korea and in international schools when her father’s career relocated the family to other countries.

A scholarship brought her to the University of Denver, and she continued her education at New England Conservatory, where she took Steve Lacy’s composition course (which, due to Lacy’s illness, was mostly taught by Frank Carlberg). “What got me was how strange [Lacy’s] music seemed at first,” she says. “It was like a person who’s intriguing because you’ve never met someone like that before. You want to know more. But when I learned his repertoire, the artistic power and accumulated knowledge and intelligence was so intense.”

Trombonist Roswell Rudd has been one of Kim’s mentors since he first heard her sing at a memorial concert for Lacy in 2004. He later invited her to sing a decades-spanning selection of his own songs for his 2008 quartet album, Keep Your Heart Right, which featured tunes that had previously been sung by Sheila Jordan. “The beautiful thing about all the singers that have interpreted my songs is the fact that each one finds something else down in the core of it,” Rudd says. “Sunny does that consistently with just about everything that she sings. She finds herself in there and that’s what she brings out.”

After NEC Kim moved to New York, where she joined the band Myth of Mitch (guitarist Sasha Brown, pianist David Bryant and drummer Jason Nazary) for her very different, electric jazz-rock debut of 2008, Android Ascension. She was also recruited by bassist Trevor Dunn to front his band Mad Love. Since returning to Seoul, she finds herself playing with other jazz musicians who have studied abroad and are now trying to find their own homegrown sound. “We’re thinking about what it means to be a jazz musician and be Korean,” Kim says. “Instead of just imitating or studying what’s going on in America, now we’re thinking, ‘How can we be authentic? How can we be original artists? How can we express our own feelings?'”

When you’re on TV, everybody knows you, or at least thinks they know you. Take Kevin Eubanks, who was on NBC’s Tonight Show five nights … END_OF_DOCUMENT_TOKEN_TO_BE_REPLACED

Jimmy Katz leads many lives. He is the preeminent currently active jazz photographer, and has shot more than 200 magazine covers and over 600 recording … END_OF_DOCUMENT_TOKEN_TO_BE_REPLACED

Take a look at Blue Note Records’ release schedule for 2022 and it’s hard to miss the significant percentage of electronic-oriented music. In March, the … END_OF_DOCUMENT_TOKEN_TO_BE_REPLACED