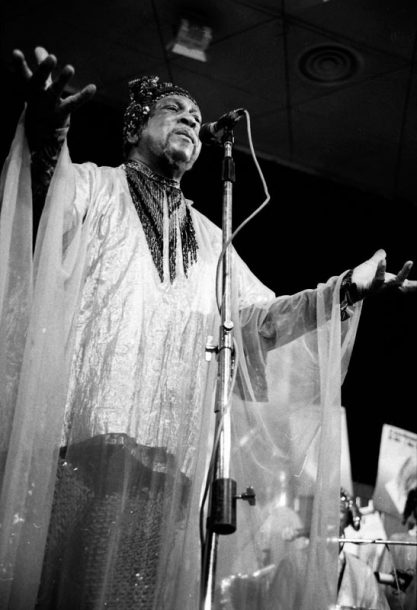 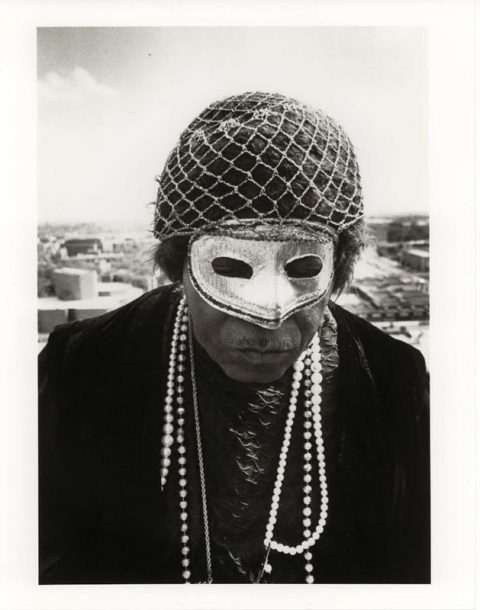 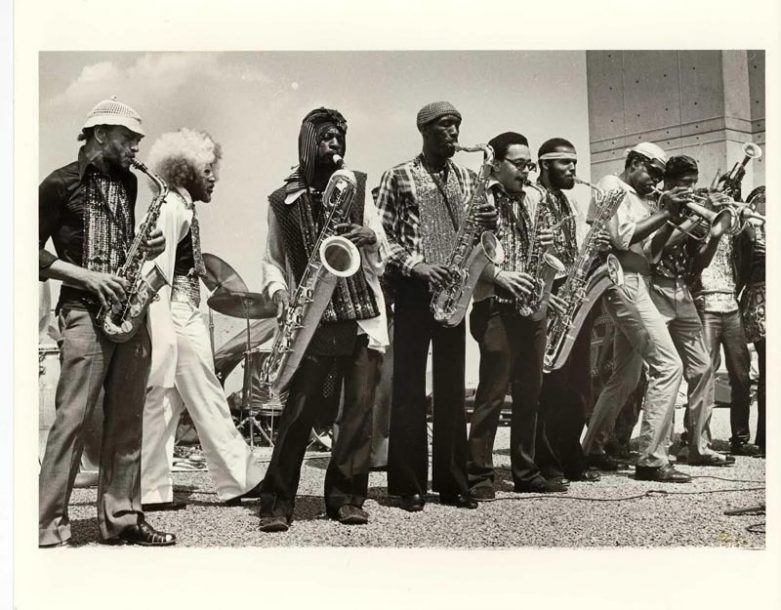 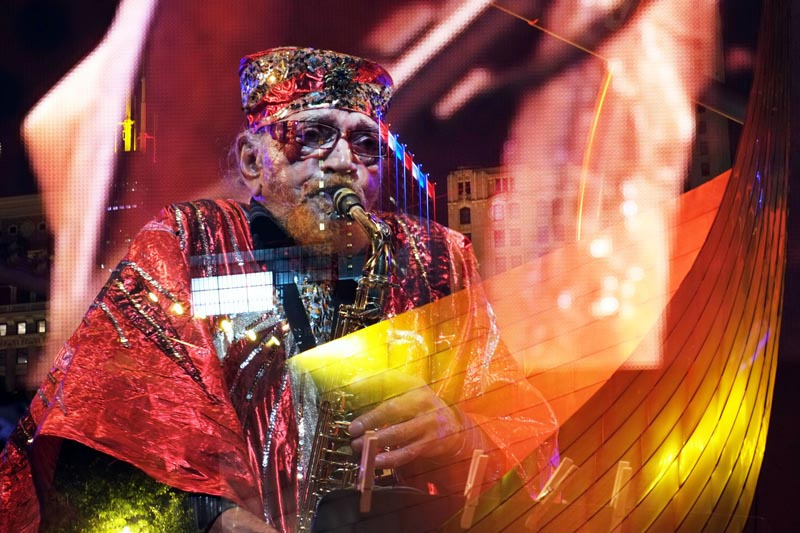 Sun Ra wouldn’t have called anything a no-brainer. He spoke in certain terms, as if all he knew was dogma, but nothing felt legitimate to him without an understanding of its opposite. “I’m going to establish my omniversity,” Ra told an interviewer during his later years. “‘Universe’ just means ‘one thing,’ [so at universities] they have to deal with the oneness of things. … The oneness of things deals with the past.” Ra preferred the multiplex, and he preferred the future.

2014 marked the 100th birth year of the late keyboardist, composer, bandleader, poet and mythological scholar. The celebrations of his life and music that took place across the country drew devotees out of jazz’s woodwork, and demonstrated how strong a following he retains-particularly in Chicago, the city that launched his career. But a glance across the landscape of experimental music, especially electronic, proves that his influence has spread well beyond jazz. It may be more powerful today than ever.

In the mid-20th century, as America flirted with space travel and nuclear war, Ra sketched an ideological roadmap drawing from ancient Egyptian cosmology, music theory, linguistics, numerology and African-African history. With music as well as words, he preached a way forward, upward, outward. His mix of liberation philosophy and jazz experimentalism often gets cited as chapter one in the history of Afrofuturism, an artistic movement that’s probably at its apogee today.

“He’s a divine inspiration, with everything and nothing to do with the music,” says Ras G, an experimental hip-hop producer who has named his Los Angeles studio SpaceBase. “It’s like the immaculate demonstration of that way of life, of living peacefully.”

This past August, the Sun Ra Arkestra gave the capstone performance at the Chicago Jazz Festival. For an hour on a warm and unhurried Sunday evening, the lavishly festooned large ensemble showered about 10,000 listeners with succulent horn arrangements, big-boned funk beats and writhing free improvisation. It was a gratifying moment of return and renewal for the band, which Ra assembled in the 1950s while living in Chicago, and which has held together under the direction of the saxophonist Marshall Allen since Ra’s death in 1993.

In a feverish centennial year, the Arkestra played over 50 dates abroad in Asia, Europe and Australia, plus a handful in the United States. Meanwhile, the 90-year-old Allen curated a well-paced, sweeping retrospective of the Arkestra’s work: the two-CD In the Orbit of Ra, which came out in September on Strut Records. The collection ranges from the Arkestra’s early, swing-meets-bop-meets-noir sound to the atmospheric landscaping of his free music. (With Sun Ra, who released over 150 carefully crafted albums, a compilation is needed if you’re not so familiar-and its diversity will strike you.)

At the Chicago festival, the Arkestra’s set was preceded by a week of movie screenings and panel discussions. Sitting at a picnic table in Millennium Park, across the lawn from Saturday afternoon’s performances, the drummer and festival curating committee member Mike Reed tells me that “it just made complete sense” to focus on Ra this year. “There’s not too many people whose life you can look at and find all these different pieces of history: What happens with electronic music, what happens with the shrinking [of the jazz ensemble], the music’s movement to Europe-all these things you can mark against his life. You can’t do that with Coltrane or Bill Evans or Sonny Rollins.”

And Chicago made a logical home for the mythic philosopher, who preferred to keep his sidemen laced into a tight social fabric. “We had a really special scene here in Chicago at the end of the 1940s and the 1950s: a very active lounge scene, a very social jazz scene on the South Side, a lot of regular gigs,” says John Corbett, a writer, gallerist and Sun Ra historian who has uncovered a wealth of musical and written work from his Chicago years. “The city provided him with an incredible band, time and musicians who would do things that, if they had been living in New York they wouldn’t have done, because they would have had other opportunities. But here they dedicated themselves to doing six or seven days a week of rehearsals.”

It also put Ra at the center of a bustling economy of ideas and entertainment, one that fostered much of the era’s emerging Black Nationalism. Together with his friend Alton Abraham, Ra often went to Washington Park on the South Side to preach his Biblical interpretations and ancient Egyptian-derived mythology-all as a means toward black self-determination and, ultimately, global salvation. He often drew crowds away from Nation of Islam preachers, Garveyites, communists and various other evangelists.

Guitarist Will Bernard bears the bittersweet blessing of virtuosic skill and eclectic taste, making his music a perpetual delight and yet hard to categorize. Maybe … END_OF_DOCUMENT_TOKEN_TO_BE_REPLACED

At 95, Chicago-based guitarist George Freeman is among the world’s oldest active jazz musicians. Although he came of musical age in the 1940s and counts … END_OF_DOCUMENT_TOKEN_TO_BE_REPLACED

When you’re on TV, everybody knows you, or at least thinks they know you. Take Kevin Eubanks, who was on NBC’s Tonight Show five nights … END_OF_DOCUMENT_TOKEN_TO_BE_REPLACED