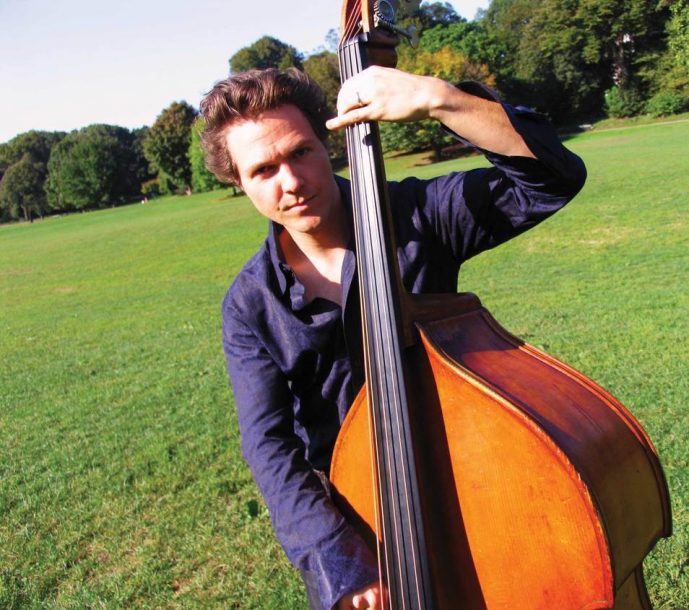 In last year’s JazzTimes critics’ poll, pianist Vijay Iyer’s Historicity (ACT), recorded with his working trio of drummer Marcus Gilmore and bassist Stephan Crump, came in a close second behind saxophonist Joe Lovano’s Blue Note release Folk Art. In slight hindsight, that seems more like an irregularity than an accolade. In so many other places Iyer’s record dominated outright: New York Times critic Ben Ratliff, for instance, named Historicity his album of the year. More than a few of the 99 critics who voted in the 2009 Village Voice Jazz Poll must have shared his enthusiasm, because Historicity topped that list as well.

As bassist Crump explains it, the album’s instant-classic status has more to do with fostering a very special ongoing musical relationship than with any sort of express purpose. “I’ve known for several years, since our first trio gig, that there is a unique power to that organism,” says the Memphis-born, Brooklyn-based musician, 38. “[W]e’ve started to develop our own language. We’ve put in a lot of work and continue to do so … but there’s an effortlessness to it now that we’re continuously able to get back to. It’s beautiful.”

“Effortlessness” is a kind of aesthetic value for Crump, who met and began playing with Iyer in the late 1990s, not long after the pianist moved to New York. Iyer’s trio, which grew out of an enduring quartet with alto saxophonist Rudresh Mahanthappa, has become lauded largely because of its ability to balance heavy concepts-highly collective interplay; metric complexity; expertly chosen, wide-ranging repertory-with gut-level feeling. When asked about his particular role in the group, Crump bears that duality out. “I try not to overanalyze it. I try to bring a lot of instinct to it,” he explains. “There’s a lot of mathematics built into every aspect of the music, and various structures and rhythms and harmonic concepts to digest. But my goal, and all of our goals, is to do that work and get beyond that, so that things become gestural and visceral and emotional. I always want the music to feel good.”

Crump echoes those hopes when discussing his own Rosetta Trio, whose new disc, Reclamation (Sunnyside), flaunts the instrumentation that Iyer accurately describes as “pretty radical”: Crump on acoustic bass, Jamie Fox playing clean-toned electric guitar, and Liberty Ellman on acoustic guitar. The album, comprising nine Crump originals, is a low-key marvel: Chamber-ish in sonic temperament and containing melodies and harmonies that seem equally alluring and askew, it is at the same time full of bracing improvisation, a strangely intuitive group dynamic and sometimes urgent rhythmic propulsion. (In an e-mail, Crump clarified how rhythm and power have more to do with the players than the format. “Let’s not confuse groove with drums,” he wrote. “If each member of my trio wasn’t grooving, the whole thing would fall apart. … Let’s also not confuse strength and intensity with volume.”)

The configuration is indeed so novel that it takes some getting used to: As Iyer says, “I guess there’s a precedent in bluegrass … but this is not like that.” Still, Reclamation offers a fine at-length listen-from the sweetly pensive “Memphis,” to the impellent, power-chord-driven “Overreach,” to the quaintly funky “Shoes, Jump,” the stunning arco work of “Escalateur,” and the sprawling “Pernambuco,” commissioned by the New York Guitar Festival and performed at that event in 2008.

For Crump, the roots of Rosetta Trio reach back to the aftermath of 9/11. “We watched the Towers fall from our rooftop,” he says, referring to his wife and frequent musical collaborator, singer-songwriter Jen Chapin. “And an old childhood friend of hers was in one of the Towers and died there. So I dealt with that on many levels, like many people did, both in the immediate-loss sense and then larger losses from being a New Yorker, and just being a human being.” Working through that blight over the next few years yielded “musical fragments” that eventually “coalesced into a group of pieces.” (Those compositions would eventually become the trio’s 2006 debut, Rosetta [Papillon Sounds].) Crump had enjoyed working with Fox and Ellman in separate settings-they hadn’t met prior to Rosetta Trio-and invited them over to play this new music in his home studio. The bassist says he chose the band’s personnel for personality, not because of the guitar itself: a bit surprising given his spot in yet another trio, that of post-Roy Buchanan Telecaster trickster Jim Campilongo, a favorite among six-string zealots. “The last thing I want to hear is a saxophonist. But give me a painter who uses a saxophone and we’re on,” he reasons. “The same goes for any instrument.

“That said,” he continues, “one thing that I discovered right from the start, from our first rehearsal recordings, is that when you’ve got stereo guitars, it’s kind of hard to go wrong. This is not a new concept. … When in doubt, just have them play something in unison, one on the left, one on the right, and it’s gonna shimmer. Keep doing it, then break them apart and you’ve got drama. It’s classic, simple and powerful.”

And, with Crump in the picture, it becomes selfless and deceptively effortless. As Iyer puts it, “No one [in Rosetta Trio] is in a hurry to achieve anything. Instead, every move they make is in service to the larger picture. That’s so hard to achieve.” He laughs, and then laughs again, heartily. “You would not believe how hard that is.”

Guitarist Will Bernard bears the bittersweet blessing of virtuosic skill and eclectic taste, making his music a perpetual delight and yet hard to categorize. Maybe … END_OF_DOCUMENT_TOKEN_TO_BE_REPLACED

At 95, Chicago-based guitarist George Freeman is among the world’s oldest active jazz musicians. Although he came of musical age in the 1940s and counts … END_OF_DOCUMENT_TOKEN_TO_BE_REPLACED

When you’re on TV, everybody knows you, or at least thinks they know you. Take Kevin Eubanks, who was on NBC’s Tonight Show five nights … END_OF_DOCUMENT_TOKEN_TO_BE_REPLACED