Skip to content
Become a member and get exclusive access to articles, live sessions and more!
Start Your Free Trial
Home > Features > Mallet Men: The State of Jazz Vibraphone 2011 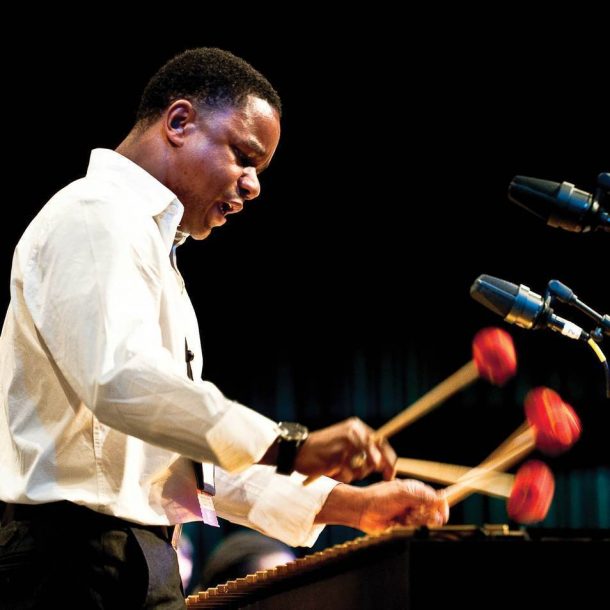 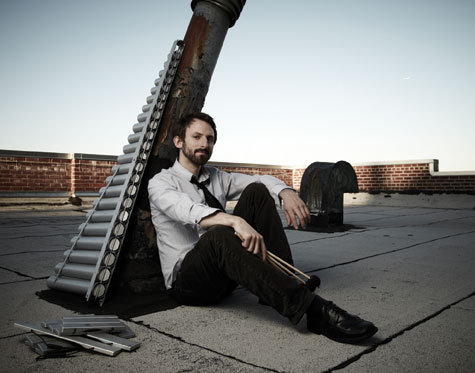 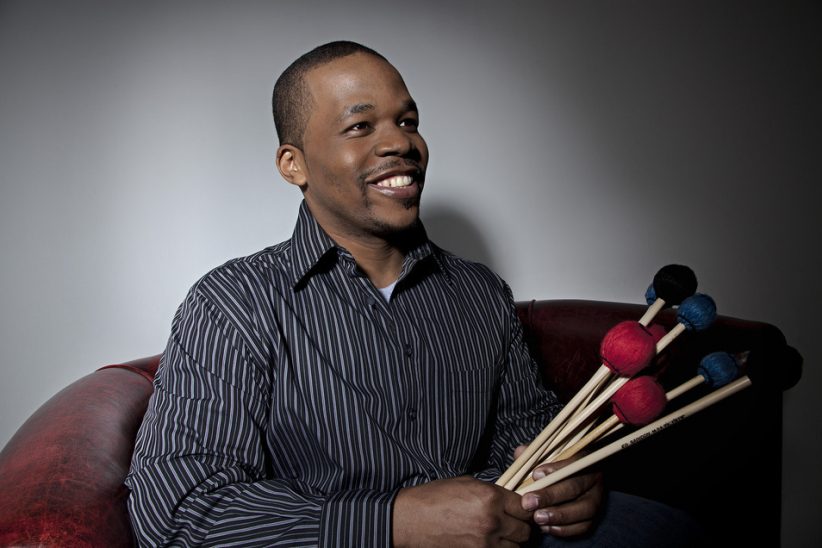 Since its initial marketing in 1921, the vibraphone-essentially a percussion instrument with piano-like melodic possibilities-has been reinvented from generation to generation. Lionel Hampton popularized the vibraphone as a jazz instrument during the mid-1930s with the Benny Goodman Trio and Quartet, then taught it how to rock on proto-R&B hits like 1942’s “Flying Home” and 1946’s “Hey! Ba-Ba-Re-Bop.” A plethora of innovative vibraphonists have come along over the decades: Red Norvo and Milt Jackson in the late ’40s and early ’50s; Gary Burton with his revolutionary four-mallet technique in the ’60s; Mike Mainieri and Jay Hoggard during the ’70s; Joe Locke, Steve Nelson and Bryan Carrott during the ’80s and ’90s.

Since his emergence in the mid-’90s, classically trained Stefon Harris has brought to the instrument striking ambition as a composer and arranger, and his stylistic versatility knows few bounds: On albums like 2009’s Urbanus (Concord Jazz), Harris and his Blackout group connect postbop to funk-, hip-hop- and even go-go-based rhythms. At age 38, he’s emerged as the elder statesman of a new breed of jazz vibraphonist. And while Harris’ undeniable virtuosity has established him as the preeminent vibes player of his generation, several other remarkably diverse players are following in his wake.

Warren Wolf, 31, burst onto the scene in 2007 with Christian McBride’s Inside Straight and later appeared on the bassist’s 2009 Mack Avenue debut, Kind of Brown. The 2001 Berklee grad is strictly a two-mallet man, in the tradition of his biggest vibraphone influence, Milt Jackson. “That’s definitely where I’m coming from,” say Wolf. “Just coming up, my dad played a mix of Milt and Bobby Hutcherson records around the house, but Milt was the one that really I caught onto. And because I had a lot of classical training during my younger years when I attended Peabody [Conservatory in Baltimore], I was especially taken by the whole approach of the Modern Jazz Quartet.”

The influence of Bags’ boppish bravado can be heard on Wolf’s self-titled debut as leader on Mack Avenue, particularly on burners like “Sweet Bread,” the supercharged “One for Lenny” and the chops-busting “427 Mass Ave.” “I like to play really hard, fast and kind of flashy,” he says, though Wolf shows a more lyrical side on the dreamy “How I Feel at This Given Moment,” an interpretation of Johnny Mandel’s gorgeous “Emily,” and a graceful duet with pianist Peter Martin on “Intimate Dance.”

New Jersey native Michael Pinto, 30, has developed a unique three-mallet technique, which he utilizes in Greg Osby’s band and also in the E.I. Trio. “I played two-mallet throughout high school and into my first year of college,” he explains. “And when I switched to four mallets and started using the [Gary] Burton grip, it didn’t feel right. I couldn’t express rhythmically and melodically what I wanted to with the extra mallets, because it adds extra weight. So it just messed up my natural flow.” His current three-mallets approach involves one mallet in the right hand playing the leading melody and two in the left hand. “I’m playing melodically like I would if I had two mallets, but you have this third mallet there to play triads whenever you need to,” he says. “So you have the freedom to go back and forth between chords and single notes.”

Pinto debuted as a leader in 2008 with Prologue on Osby’s Inner Circle Music label and in 2010 released Little Green Men on SteepleChase. Initially inspired by vibraphone greats Jackson and Burton, he later came under the sway of Osby’s edgy vocabulary while attending Berklee, where he studied vibes with Dave Samuels. “Once I heard [Osby’s 1998 Blue Note album] Zero everything changed. I started listening to Debussy or Poulenc … classical guys who were more modern. For some reason that’s just where my ear wanted to go. And what I’m trying to bring to the vibraphone is that side of the music.”

In the past few years, vibraphonist Jason Adasiewicz, 34, has emerged as one of the most in-demand players on Chicago’s exciting new-music scene. Originally a drummer who played in rock bands while growing up in Crystal Lake, Ill., he was introduced to the vibraphone by his drum teacher Bob Roak. Early on in his investigation of the instrument, Adasiewicz’s biggest influence on the vibes was Ruth Underwood from Frank Zappa’s band. “Zappa is a great source for dealing with odd time signatures,” he explains. “So, through learning complex tunes like ‘St. Alfonzo’s Pancake Breakfast’ and ‘Inca Roads,’ I discovered Ruth.” (Earlier this year, Adasiewicz toured Italy with pianist Stefano Bollani in a Zappa tribute band featuring bassist Larry Grenadier, drummer Jim Black and trombonist Josh Roseman.)

“I didn’t know who Milt Jackson or Bobby Hutcherson were until I got to college,” he adds. It was after he dropped out of college, while working at Jazz Record Mart in Chicago, that he discovered Lionel Hampton and Red Norvo. Aside from leading his Rolldown quintet (the group’s 2008 self-titled debut and 2009’s Varmint were both critically acclaimed), Adasiewicz currently leads the Sun Rooms trio with bassist Nate McBride and drummer Mike Reed. He is also a member of Mike Reed’s Loose Assembly, Aram Shelton’s Arrive, Josh Berman’s Old Idea, Rob Mazurek’s Exploding Star Orchestra, and the Starlicker trio with cornetist Mazurek and drummer John Herndon. “Things feel amazing in the city right now,” he says of the vibrant Chicago scene. “I know other musicians from here who travel a lot during the year, but I really like to make time to hang here and just play with everybody in town.”

Like Adasiewicz, Tim Collins’ early music influences were not jazz. “My first serious musical obsession was progressive rock, specifically Rush and Yes,” says Collins, 34. “Then, when I started playing vibes at age 20, I became obsessed with Milt Jackson and Bobby Hutcherson.” Collins’ third outing as a leader, Castles and Hilltops, reflects an eclectic range of music, from a cover of Björk’s “The Anchor Song” to the dynamic “The Tunnel,” which he says incorporates elements of Foo Fighters and Steve Reich. “I would also include Victor Feldman, Dr. John, Keith Jarrett, John Coltrane, the Police, Bach, the Meters and Lee Konitz as important influences,” he says, “along with musicians in New York who are doing amazing things every day, like John Ellis or Aaron Parks.”

Vibraphonist Matt Moran, 39, has received much acclaim as a member of John Hollenbeck’s Claudia Quintet, appearing on all five of the band’s releases since 2001 (most recently 2010’s Royal Toast on Cuneiform). But perhaps his most unique application of vibes occurs in his band Sideshow, which interprets the music of Charles Ives. A 1995 graduate of the New England Conservatory, where he studied with the late saxophonist, clarinetist and master improviser Joe Maneri, Moran maintains a lofty mission statement for his instrument: “I’ve always seen the vibes as something to transcend. We think of the human voice as the most easily communicative instrument, and I can’t think of an instrument that’s further away from the human voice than the vibraphone. So I want to take this very limited instrument, in terms of its articulation and expression, and bring to it a sufficiently poignant musical statement that will transcend and transform the limitations.”

Since moving to New York City in 2007, 31-year-old San Jose native Chris Dingman has been making an impact on the scene, performing with like-minded colleagues such as trumpeter Ambrose Akinmusire, pianist Fabian Almazan and saxophonist Steve Lehman. On his stirring debut, 2011’s Waking Dreams (Between Worlds), he strikes an artful, evocative chord with a suite of deeply lyrical pieces like the serene opener “Vijayanagara,” the tender “Manhattan Bridge” and the intimate solo vibes number “Reflection.” While at Wesleyan University in Connecticut, Dingman took leave to go to India, where he studied mridungam (South Indian drum). “I still hadn’t fully committed myself to the vibes at that point, but being there and studying music every day there gave me a chance to stand back from my life a bit and see that I really wanted to play vibes,” he recalls. “So funnily enough, studying Indian music led me back to the vibraphone.”

OK, that’s funny, but it also implies a problem. People who dismiss the accordion as soon as they hear it, as soon as it triggers … END_OF_DOCUMENT_TOKEN_TO_BE_REPLACED

The last time Hilario Duran, the 69-year-old Cuban Canadian piano master and composer, teamed up with another pianist was in 2017, when he performed duets … END_OF_DOCUMENT_TOKEN_TO_BE_REPLACED