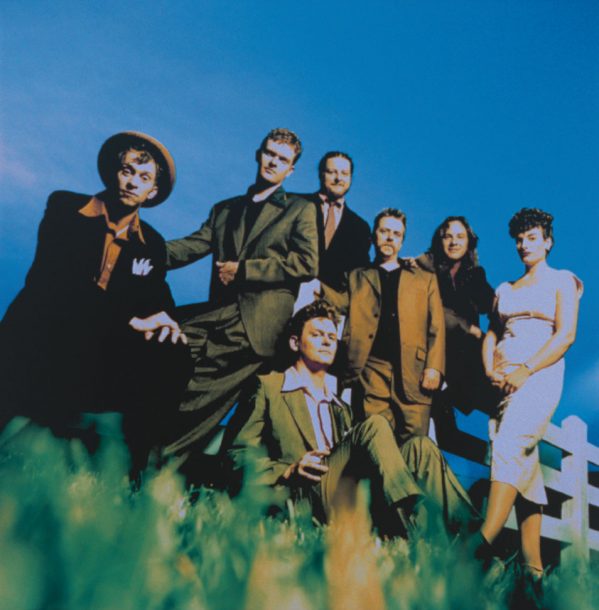 There’s a new/old beat on the street and in the shopping malls, and it has a kinship to jazz. But, make no mistake, it’s not exactly jazz, and the sooner you realize that, the sooner you’re susceptible to the campy pleasures contained therein. Young bands are raiding the second hand stores for vintage duds and copping musical attitudes borrowed from the swing and jump band era. They mean well, even if their musical chops haven’t caught up with their enthusiasm, and the audience-an unusually broad swath of age and cultural demographics-is dancing up a storm around the revival sound, nonplussed by the unripe musicianship beneath it all.

Welcome to the world, by association, of the Squirrel Nut Zippers, the giddiness of whose bandname matches the nervous good cheer of their act. The unabashedly retro-glancing band from the rich music scene in Chapel Hill, N.C. has managed to sashay its way into mondo sales-1.5 million and counting-and the public ear. The band bows at the feet of Cab Calloway and the Harlem Renaissance, and other pre-war musical models, and incorporates cheeky entertainment value along with their modest musical wares, which are maturing in public. This is not a group of refined musicians, but rather a case of eager young acolytes of archival American music, seeking to connect the dots in a personal tribute to yesteryear.

Jen Shyu is slumped over a desk. As a green spotlight illuminates her long, dark hair and shoulders, a disembodied female voice imitates bird and … END_OF_DOCUMENT_TOKEN_TO_BE_REPLACED

Almost everybody has seen it: Sailor Sabol’s spectacularly out-of-tune rendition of “The Star-Spangled Banner” at the February 2021 CPAC convention. Dozens of videos are circulating … END_OF_DOCUMENT_TOKEN_TO_BE_REPLACED

In the fall of that notorious election year of 2016, six-time Grammy-winning arranger/composer Vince Mendoza was working on a commission from the Czech National Symphony … END_OF_DOCUMENT_TOKEN_TO_BE_REPLACED

Optimism is an unlikely through line for a jazz statement born, reared, and recorded during a pandemic. But alto saxophonist and composer Steve Slagle can … END_OF_DOCUMENT_TOKEN_TO_BE_REPLACED