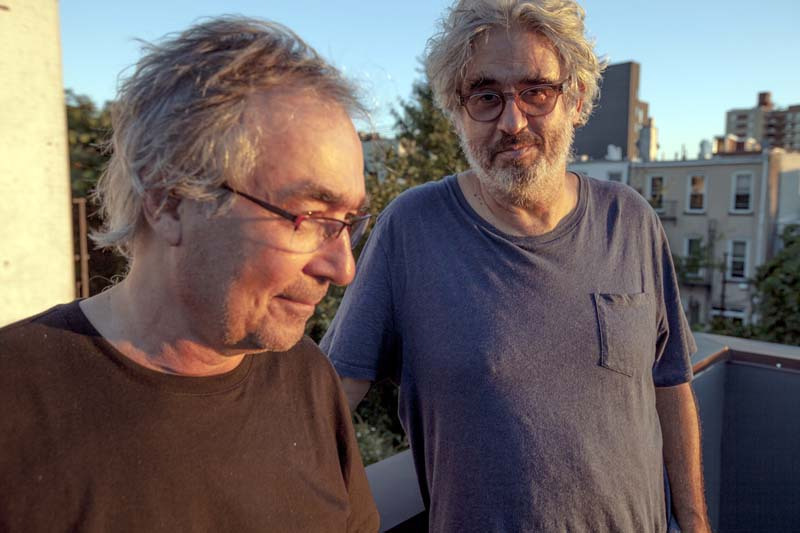 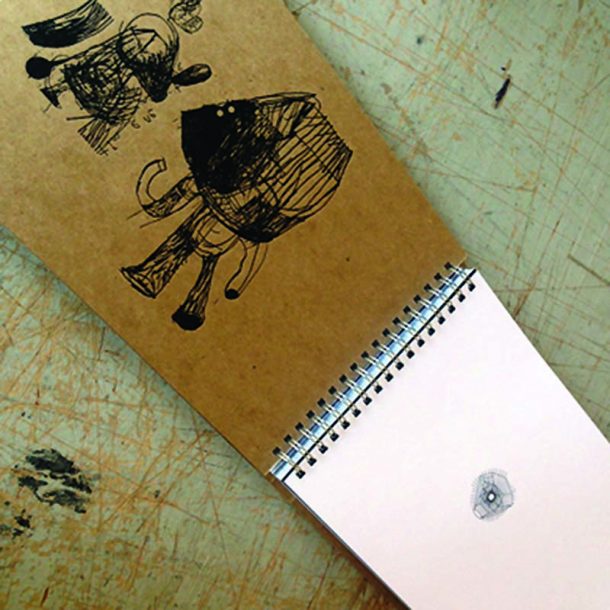 When alto saxophonist and composer Tim Berne was thinking about cover art for Fulton Street Maul, his 1987 debut for Columbia, he noticed the cover of a classical album, Olivier Messiaen’s Turangalîla-Symphonie, sitting in the office of the record company’s art department. “It had this weird, Cubist-looking drawing/painting,” Berne recalls. “I said, ‘Wow this is great! Who did this?'”

Steve Byram, the artist in question, was considered the staff renegade, or as he puts it, “the weirdo art director.” By then he had already racked up design credits for Beastie Boys’ Licensed to Ill and Slayer’s Reign in Blood LPs. Berne knew Byram’s aesthetic would complement his music.

The saxophonist’s relationship with Columbia ended after a second album, but he has sustained a partnership with Byram for over three decades; at this point, Byram’s abstract drawings and primitive letterpress designs are virtually synonymous with Berne’s unique music. Berne now records for ECM Records, whose noirish, atmospheric artwork presents its own trademarked aesthetic. But he maintains his own Screwgun imprint, which he launched in the ’90s. The label’s first 11 releases came in cardboard covers adorned with Byram’s work; now comes Spare, a limited-run book/CD that pays tribute to Berne and Byram’s enduring collaboration.

Byram’s musical influences ran toward rock, and it took him a while to grasp Berne’s avant-jazz. “I asked him, ‘Why the hell did you come to me to do a cover?,'” Byram recalls. “He said, ‘I thought that you’re doing the same thing I’m doing, from an art standpoint.’ That’s pretty deep-a musician being able to see that. It took me a long time to figure out that, to a certain extent, we are approaching things in the same way. I’m sitting down and composing and making stuff up as I go along, within a kind of structure.”

The two had talked about doing a book for years, but it came to fruition in early 2014, when Berne decided to release a Snakeoil disc independent of ECM. “The way I work is I’ll throw out these ideas and if I say it, it’ll happen,” Berne explains. “And if I keep bringing it up, I get sort of disappointed in myself, so I say, ‘OK, I’ll do it.'” He missed the hands-on element of the early Screwgun releases, and wanted to bring that style of cardboard packaging back. Unfortunately, the letterpress company Berne used previously was out of business. Through a little online research, he found Dexterity Press in Connecticut, whose owner coincidentally had worked on the early Screwgun discs while apprenticing for their previous printer. “There are a few good things that happen because of the Internet, and this is one of them,” Berne says with his trademark wryness.

But just as the disc was ready for public consumption, ECM released Snakeoil’s You’ve Been Watching Me last spring. Not wanting to oversaturate an already limited market, Berne and Byram had a backup plan. “We thought, we’ll hide the CD in the book, and the book will be the focus,” Berne recalls. “And it’ll be this weird multimedia thing that, in a way, will address this issue of how you sell CDs [nowadays]-hard copies as opposed to digital.”

Spare is available exclusively online at screwgunrecords.com. Measuring 6 by 9 inches and spiral-bound, it features 100 pages of Byram’s drawings interspersed with photographs Berne has taken on tour. Byram collected the photos and curated them within his own work. Out-of-focus images seen through car windshields and airplanes, random shots of bandmates and abstract imagery spill across the pages. Sometimes Byram’s scribbled figures sit opposite Berne’s photographic studies of light, while at other times both pages are devoted to one artist.

A paper sleeve glued to the inside back cover holds the disc. “Snakeoil” doesn’t appear anywhere, but the names of Berne, Oscar Noriega (clarinets), Matt Mitchell (piano) and Ches Smith (drums/percussion) are listed. (It’s worth noting that Berne says ECM gave the OK on the release.) The band tackles two previously released compositions and two newer ones, stretching out over Berne’s topographic writing. The disc’s live sound gives the quartet an immediacy that causes it to evoke Berne’s influential band Bloodcount.

Limited to an edition of 500, the artifact fulfills the duo’s earliest intentions. “We wanted to do stuff that didn’t look like mainstream record [art]. We wanted it to look cruder, for lack of a better word,” Byram says. “We wanted the book to be in that spirit too. Spiral binding is not really elegant, although I would argue that it has a certain crude elegance to it. Crude elegance, I think, has been the aesthetic that I followed.”

Guitarist Will Bernard bears the bittersweet blessing of virtuosic skill and eclectic taste, making his music a perpetual delight and yet hard to categorize. Maybe … END_OF_DOCUMENT_TOKEN_TO_BE_REPLACED

At 95, Chicago-based guitarist George Freeman is among the world’s oldest active jazz musicians. Although he came of musical age in the 1940s and counts … END_OF_DOCUMENT_TOKEN_TO_BE_REPLACED

When you’re on TV, everybody knows you, or at least thinks they know you. Take Kevin Eubanks, who was on NBC’s Tonight Show five nights … END_OF_DOCUMENT_TOKEN_TO_BE_REPLACED