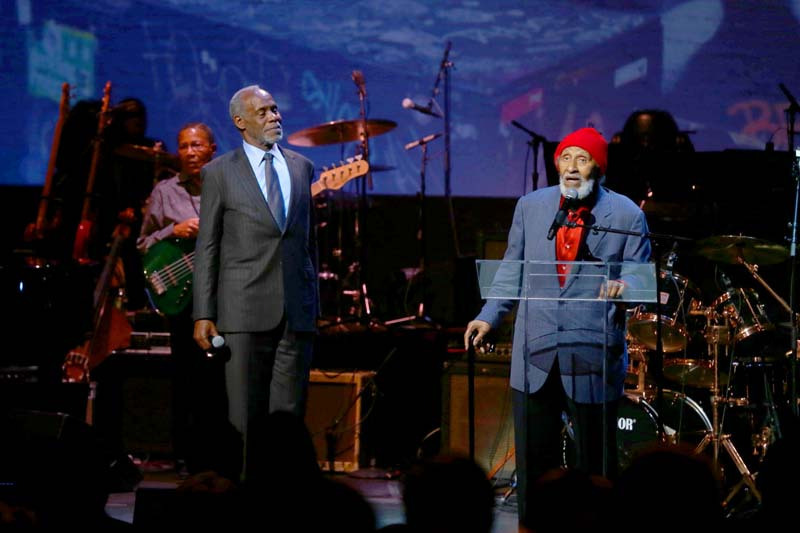 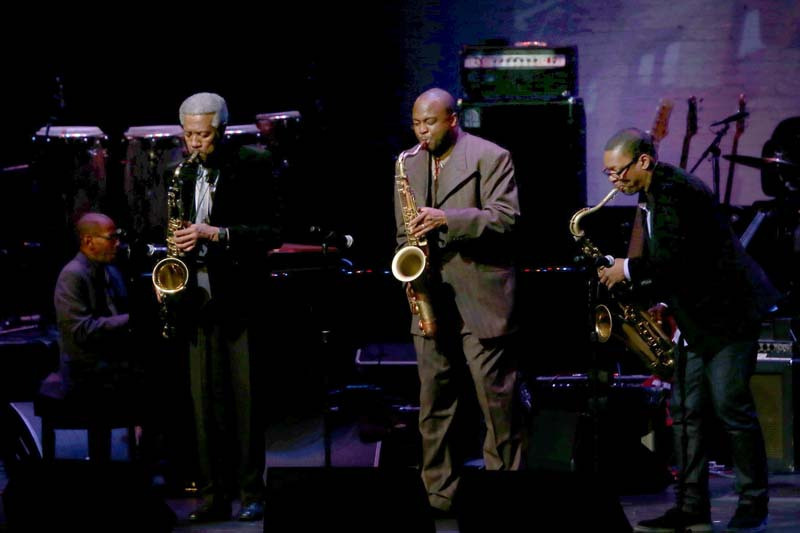 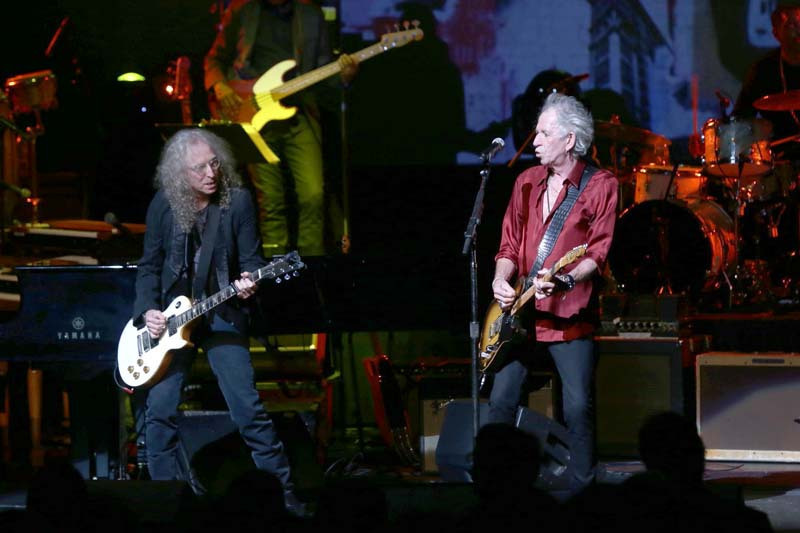 There’s a large, lovely wall behind the stage of the historic Apollo Theater in Harlem. It appears to be brick painted some shade of eggshell, perfect for any sort of illumination, whether stark or soft; I’ve seen it look gorgeous cast in red or blue. There is, therefore, no need to project images of contemporary New York City graffiti onto it, especially throughout the majority of a terrific program featuring some of the greatest musicians alive today. The desired vibe seemed obvious enough: jazz and blues are raw, real American expression born in the streets, as is graffiti art … or something. But backgrounding the blues-lite singer-songwriter Keb’ Mo’ with murals of the Clash’s Joe Strummer and Tupac Shakur provides little more than a distracting non sequitur. The same for acoustic jazz and roots performances accented by images of Betty Boop, or a Nazi-fied Ronald McDonald, or the lowbrow aerosol that covers the bars near my building in Queens.

But let’s not turn annoyance into pettiness, particularly when dealing with what was essentially a glitzy act of nobility. The Jazz Foundation of America’s 14th annual gala concert, held at the Apollo on Oct. 22, was won right out of the gate: The JFA’s executive director, 2016 NEA Jazz Master Wendy Oxenhorn, announced that the event had already earned hundreds of thousands of dollars to use to help ailing musicians; a later, all-inclusive sum came to $1.5 million. And the concert was its trademark deft blend of heavy-duty mainstream jazz with the rock and R&B royalty that add sparkle for the laypeople. This year, with the addition of show-closer Keith Richards performing the Stones’ “Gimme Shelter,” the event received high-profile press typically reserved for televised awards shows. Another victory. (Seeing Richards lock into one of his shambling grooves at close range is the caliber of memory that quickly becomes a bullet on your short list of beer-drinking stories.)

The program, directed by drummer Steve Jordan, built from sanctity toward celebrity in three acts dedicated to three honorees: To open, the late civil-rights leader Julian Bond; in the middle, a JFA Lifetime Achievement Award for tenor titan Sonny Rollins; and to bring it home, the Clark & Gwen Terry Courage Award for Merry Clayton, the legendary backing vocalist best known for her duet with Mick Jagger on “Gimme Shelter,” and for her part in the documentary 20 Feet From Stardom. (Clayton wasn’t able to attend, a victim of unspeakable tragedy. In 2014, just as the film was helping her gain the spotlight that had evaded her for so many years, she was in a car accident that necessitated both of her legs be amputated. She accepted her award in a beautifully shot video that underscored her indomitable spirit and sense of humor; her fellow Stones singer Lisa Fischer appeared with Richards.)

Bond received his due from Danny Glover, Keb’ Mo’, Davell Crawford’s gospel choir, keyboardist Ivan Neville and the soul singer Kimberly Nichole, who injected “I Wish I Knew How It Would Feel to Be Free,” best known via Nina Simone, with Atlantic-era R&B chutzpah. A duet rendition of Rollins’ “St. Thomas” by pianist Randy Weston and bassist Alex Blake was also technically filed in the Bond section; there, Blake’s near-rockabilly slap technique and guitarlike chording and soloing were given plenty of autonomy, and the crowd went for it.

Rollins’ proper homage opened with an obligatory video short, before a jam-session loose take on “Paul’s Pal” was led by Steely Dan’s Donald Fagen-capable on piano in an acoustic jazz setting, with a weighty, unvarnished, chord-heavy solo style that stuck to the tune’s mid-’50s language. Along with Fagen were trumpeter (and Steely session alum) Randy Brecker, saxophonist Jimmy Heath, bassist Buster Williams and drummer Al Foster. The highlight of Rollins’ homage followed, with the title track from the LP containing “Paul’s Pal,” Tenor Madness. There, the rhythm section of Williams, pianist George Cables and drummer Jack DeJohnette swung expertly underneath a tenor battle featuring Ravi Coltrane, James Carter and Billy Harper. As much as serious jazz observers would like to think the music has matured beyond cutting contests, you couldn’t help but keep a scorecard, or at least note the varying strategies at hand. Coltrane played strong, balanced, logical yet surprising phrases; Carter, not surprisingly, honked and wailed into the stratosphere with a mainstream tenor man’s sense of control and an avant-gardist’s sort of abandon, earning the most sizable applause; and Harper seemed to occupy the middle-ground between his usual powerhouse-intellectual self and the showier demands of the format.

That rhythm section stayed onstage for a big-band-backed “Alfie’s Theme,” featuring tenor great Benny Golson standing in for Gary Bartz and essentially playing one marathon chorus, filling the tune with swinging midtempo phrasing from start to finish. An unavoidably messy blowout jam on “Global Warming” and “St. Thomas” closed, and it matched Rollins personnel-Cables, Steve Jordan, trombonist Clifton Anderson and bassist Bob Cranshaw among them-with a conga line’s worth of his saxophone acolytes, ranging in stature from hard-working tenors like Eric Wyatt, Keith Loftis and Ron Holloway to festival-circuit staples Kenny Garrett and Melissa Aldana. In all, it was a fine, kindhearted nod that suggested more diverse and inventive possibilities for future celebrations of our greatest living jazz musician.

And then there was Sonny, who spoke but did not play. He was introduced by T.S. Monk (sweet, thoughtful) and Danny Glover (teleprompter-stiff), and, as is his wont, used his soapbox to lift up his culture and his favorite music rather than even glance toward ego. The Apollo, he said, was his university where he learned about the music, before emphatically listing the musicians who shaped him, from Fats Waller and Jimmie Lunceford through Bud Powell, Bird, Miles and more. He was “a spiritual soldier of jazz,” he nearly shouted. Here he had a rapt congregation of fellow believers.

When you’re on TV, everybody knows you, or at least thinks they know you. Take Kevin Eubanks, who was on NBC’s Tonight Show five nights … END_OF_DOCUMENT_TOKEN_TO_BE_REPLACED

Jimmy Katz leads many lives. He is the preeminent currently active jazz photographer, and has shot more than 200 magazine covers and over 600 recording … END_OF_DOCUMENT_TOKEN_TO_BE_REPLACED

Take a look at Blue Note Records’ release schedule for 2022 and it’s hard to miss the significant percentage of electronic-oriented music. In March, the … END_OF_DOCUMENT_TOKEN_TO_BE_REPLACED

Those who are only familiar with bassist Martin Wind’s jazz credentials—both as a leader and as a first-call sideman for Bill Mays, Dena DeRose, Ken … END_OF_DOCUMENT_TOKEN_TO_BE_REPLACED