Skip to content
Become a member and get exclusive access to articles, live sessions and more!
Start Your Free Trial
Home > Features > Sonny Rollins at the Turning Point

Toward the end of the 1950s, the already renowned tenor saxophonist Sonny Rollins managed to kick his addiction to heroin. But he soon realized that getting clean of one drug wouldn’t free him from other temptations: cigarettes, alcohol, unhealthy food. Nor could it wipe away all the bad energy—insecurity, anger, envy, depression—that coursed through the life of a working jazz musician. And so, with the support of his wife Lucille, Rollins resolved to take a sabbatical from the stage and the recording studio, beginning in the summer of 1959 and lasting roughly two years. Instead of paying gigs, he oriented his time around personal health and spiritual growth. He drastically changed his diet, took up yoga, lifted weights, and engaged in other regular, intense exercise. He read deeply in philosophy and religion, investigating esoteric belief systems like Rosicrucianism, and took an anthropology course at Cooper Union.

Most famously of all, he brought his horn to the Williamsburg Bridge, near his apartment on Manhattan’s Lower East Side, for epic solo practice sessions in the open air, hour after hour, night after night.

In his new book Saxophone Colossus: The Life and Music of Sonny Rollins (written with Rollins’ full participation), Aidan Levy expertly examines this crucial period. The following excerpt finds the saxophonist still in the midst of his Bridge time, but beginning—with encouragement from his equally legendary friends—to feel that he could safely make the transition back to performance and a richer public life.

On September 7, 1960, Sonny turned 30. The next day, he recorded his thoughts on the milestone in his journal. “Birthday now past but tendencies toward disruption still exist,” he wrote. It seems he violated his strict diet and succumbed to the urge for a cigarette. “By the very documenting of these transgressions I am demonstrating my awakening strength which will come into full bloom at such time as I have suffered through the various manifestations of these problems.”

During his sabbatical, Sonny did maintain a modest social life. He had strictly sworn off any commercial endeavors until he was ready, but he had befriended maverick Armenian American producer George Avakian, 11 years his senior. Avakian had signed Miles [Davis] to Columbia and, in 1960, produced the Billboard No. 1 pop album The Button-Down Mind of Bob Newhart and the Everly Brothers’ “Cathy’s Clown,” a No. 1 single for five weeks that summer. Avakian had a disarming, soft-spoken charm that belied his status as a major label bigwig—and he loved Sonny.

They first met years earlier at Basin Street when Sonny was with Brown-Roach [the mid-’50s quintet co-led by trumpeter Clifford Brown and drummer Max Roach] and began talking during set breaks. With Sonny, “You could sit down and have a serious talk about almost anything, because he kept up with the news of the day and events of the world, and he had good opinions, thoughtful opinions,” Avakian recalled. They became friends, and in October 1960, Avakian invited Sonny to attend the World Series. Sonny gladly agreed to go to Yankee Stadium to see his team against the Pittsburgh Pirates, October 9–10. During the national anthem, Sonny did not stand, in protest of social injustice.

“We had very good seats,” Avakian recalled. “Sonny was very knowledgeable, which was helpful, and we happened to hit some pretty good games,” though the Pirates won both. Despite the Yankees’ series loss, it cemented their bond, which led to a business relationship. “We just kind of drifted into it,” Avakian said. “Nothing very special. It just grew out of friendship.”

Three months later, in January 1961, there were rumors that Sonny would be ending his sabbatical and appearing at the Birdhouse in Chicago. He never showed up, though, and Donald Byrd took his place. “The management of the club said he was still practicing and experimenting,” read the report in Down Beat. “Rumor has it that he does his practicing in the middle of a well-known bridge in New York City.”

“Dearest Lucille, … [T]here is no denying that I have prepared myself … Every note that I play will be played for you.”

Sonny had begun to realize that the sabbatical might have to end. “I love you,” he wrote Lucille in one of his daily love notes, “and we are nearing the time when our labors of the present will be our pleasures of everyday.”

On March 28, 1961, Sonny’s restlessness and an early spring malaise was the subject of a two-page letter: “Dearest Lucille,” it began. They were both experiencing some bouts of depression as the seasons changed. “As you know, hot weather incites a listlessness in me which is extremely dangerous to the progress I have made. Speaking of progress, I have reached the point to which my endeavors have been aimed and this in itself can cause me to become impatient and bored if I am not careful to guard against it.” Upon his return, counterintuitively, Sonny looked forward to being able “to relax more and take more vacations.” But one more summer on sabbatical remained. “However difficult this last summer might loom there is no denying that I have prepared myself and am able and ready to make the above plans materialize. Every note that I play will be played for you. The trials and hardships of these days together has invoked in me the highest feeling of devotion towards you and indeed your presence has brought about the success which I have definitely achieved.”

The following week, Sonny hinted at his reentry in a five-page handwritten response to a letter from Marty Burns, a college sophomore writing a paper on the contemporary state of jazz. Burns, who hardly expected any response at all from the jazz scene’s most enigmatic missing person, was shocked; it made for quite a term paper. Sonny had read a New York Times article detailing plans to create a network of jazz clubs across the Soviet Union as a bulwark against the spread of capitalism. To Sonny, however, jazz was a “tremendous force for understanding and peace” that could have the power to ease Cold War tensions. Sonny believed that the “National Art Form” should be used as a diplomatic tool to promote multicultural tolerance. “Contrary to some beliefs jazz music is not the sole property of any one group of people!” he wrote. “Jazz music, while no doubt utilizing the ‘rhythm’ of such warmer climated areas as Africa, adds to that rhythm the harmonies which have been developed and perpetuated in the colder land areas of Europe.” To Sonny, “This combination of cultures has endowed jazz with a freedom which does not exist in any other music. It is therefore superfluous to speculate on the future direction of Jazz. Jazz will evolve as mankind evolves. … Jazz, as men, has no limits, no boundaries save those it would inflict upon itself.”

Sonny felt that jazz had to shift from the jazz club to the concert hall and that the “cigarette-smoking, whisky-drinking jazz great must be replaced by the clean-living, healthy, socially-aware jazz great. This transition is not so difficult as it may seem and in many respects is already in manifestation,” Sonny wrote. “I hope to further the projection of this new image.”

Sonny got more of a push to come down from the Bridge that June, when Charles Mingus and Max Roach, who cofounded Debut Records together, came to visit him on Grand Street. Mingus was taken aback by Sonny’s chiseled visage. But the change was more than skin deep. Sonny even gave Mingus a copy of H. Spencer Lewis’ Mansions of the Soul. “Yes you have changed, Sonny, and I’m sure you realize I love that change,” Mingus wrote. “It is rather quietly screaming at the top of your voice, muscles, and quiet attitude.” That month, Mingus went to London to film All Night Long (1962), where he encountered a racist atmosphere as soon as he got off the plane, and he wrote Sonny a six-page single-spaced letter on June 20 after several sleepless nights demanding his return to the scene.

Mingus hadn’t written anyone in years, and what came out of the typewriter was a torrent of emotion. It could be expressed only in writing, Mingus wrote, in order to keep his ego out of it and to grapple with his “many more than two selves that I have rather hesitantly learned to live with, as perhaps you have done obviously with yourself.”

Mingus could follow Sonny and seek salvation through the Sisyphean pursuit of study Sonny seemed to favor, he wrote, but “I’d much rather you’d save me immediately, and Max, with your saxophone. I’d like to discuss some of this on the bandstand with you. I haven’t cared and have cared too much also. But since I’ve seen you with Max I have been born again.”

Mingus’ theory was that Sonny’s physical transformation was motivated by more than fitness for its own sake. “I think that aside from your faith you don’t want anybody messing with you,” he wrote. “I know the time Jesus got the whip out on the dealers in his temple. He was a pretty strong fellow in many ways that you’re not, but I don’t think he could press no 215 pounds.”

To Mingus, salvation could not be found in the self without being found in the community. “I’m still old-fashioned in the belief that part of finding God is finding yourself in relation to man and with man as your brother,” Mingus wrote. Together they had lived through hell, and if Sonny had found a little piece of heaven, Mingus hoped they could live through that together as well.

It is a further belief that if we seek in our music together, somewhat like the olden days when people played for beauty other than money, there we will find and give to the others and ourselves. But if we have found the sound of God itself and keep it to ourselves, there are those who must seek without you or the finder who pleases himself only with the sound of the Lord pouring from his horn. We must seek another and another so that all with ears can have the voice of God so needed. If you have this voice take it from your locked doors. Open your case. We will hear you as you hold your horn to let Him speak.

Max, Mingus, and Sonny never did form that trio, but soon thereafter, Sonny came down from Sinai.

Excerpted from SAXOPHONE COLOSSUS: The Life and Music of Sonny Rollins by Aidan Levy. Copyright © 2022. Available from Hachette Books, an imprint of Hachette Book Group, Inc. 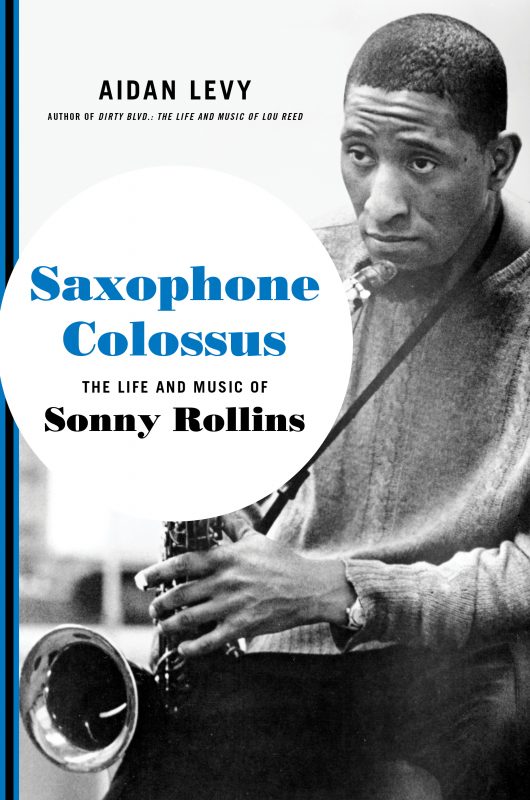 OK, that’s funny, but it also implies a problem. People who dismiss the accordion as soon as they hear it, as soon as it triggers … END_OF_DOCUMENT_TOKEN_TO_BE_REPLACED