Skip to content
Become a member and get exclusive access to articles, live sessions and more!
Start Your Free Trial
Home > Features > Sherrie Maricle: The DIVA in Profile 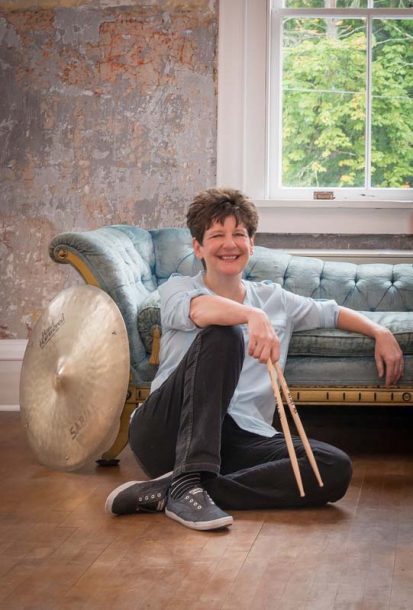 "You just have to keep forging ahead," says Sherrie Maricle

When Sherrie Maricle was 11 years old, she decided she wanted to play the trumpet. “Girls don’t play the trumpet,” she was told by a teacher at her school in Buffalo, N.Y. Maricle tried a couple of other instruments without success, and then one day she hit a drum. The more she hit it, the more musical it sounded. She waited to be told that this instrument too was intended only for male hands, but the admonition didn’t arrive. Instead, she says, “The teacher thought maybe I had an inclination toward drums and took me to see Buddy Rich. [Rich] started out on the hi-hat and the band came out screaming. I got goosebumps. ‘What the hell is that?’ I raced home and told my mother I was going to play jazz. I didn’t know what a big band was but I loved it. That was it. I knew what I was doing.”

Maricle, now 53, has been doing it ever since, most notably as the leader of the 15-piece DIVA Jazz Orchestra, which will celebrate its 25th anniversary next year. She also leads the DIVA Jazz Trio and 3Divas, and the quintet Five Play. She’s just begun her 27th season with the New York Pops, has accompanied many other high-profile artists, gives private lessons and runs an interactive program for kids at Manhattan’s Ronald McDonald House. In 2009, Maricle received the Lifetime Achievement Award from the Kennedy Center’s Mary Lou Williams Jazz Festival.

At this point in the article, you might expect to read about how difficult it’s been for Maricle to attain all of this, how she had to fight for recognition as a female jazz drummer. And, of course, there has been some of that. A major record company once turned DIVA down because, they told her, “We have our women band.” Promoters have booked Maricle and her outfits with the faint praise of “We’d better hire some women for this festival.”

But “you just keep forging ahead and try not to let it beat you down,” she says. “One of the motivating factors is the music I love and believe in, and the players I love and believe in. [And] when you’re in front of an audience and you’re consistently getting standing ovations, that’s further motivation: We’re offering people something that really makes them happy. We’re artists and musicians of the highest caliber, but I’m happy to be an entertainer too. And I do have men playing in the group all the time-gender never surpasses talent. If there isn’t a great woman lead trumpet player, then I’m getting a guy.”

Likewise, to her peers, gender has rarely been an issue. When the great Billy Taylor was tasked with assembling acts for a television special celebrating the 25th anniversary of the Kennedy Center, where he was the artistic director for jazz, he called upon DIVA. “He could have chosen any big band in the world,” Maricle says. “But he said, ‘You know what? You’re just a great band, that’s it. Come be on TV with me.'”

From the start, excelling at the music has been the major driving factor for Maricle. Once the big-band bug planted by Buddy Rich took root within her, Maricle began simultaneously studying and playing professionally, obtaining her master’s and a doctorate while gigging regularly. The idea for the DIVA Jazz Orchestra came about when drummer and music-business veteran Stanley Kay decided to assemble an all-female big band. “He remembered that a lot of the big bands in the World War II era were women and called me,” Maricle says. “He asked me, ‘Do you know other women who play as well as you?’ I thought that was a huge compliment, and I certainly did, and we put together our audition in June of ’92 and went off from there.” Since then the orchestra has released nine albums-including a new tribute to Kay, who passed away in 2010-and Maricle has released one with the Diva Trio and four by Five Play. The next DIVA Orchestra CD will be released next year.

Whether working in the large-ensemble format or the trio, Maricle feels equally at home. “A lot of drummers I talk to, those are their favorite types of playing, big band and trio,” she says. “With the trio I still feel I can have the power and swing and intensity of a big band, but each individual player has more responsibility toward making the group sound. You’re three people in total support of each other. There’s more flexibility and freedom.” And then there’s her work with the Pops, about which she says, “The whole concept is so different, in terms of where you place the time, the volume, the kinds of fills and other things you can play.”

But mostly it’s the same spark from her childhood that continues to inspire Maricle today. “The big band is just so dynamic and powerful,” she says. “Not that you can’t do it with a trio too, but the orchestral colors and all the different kind of music you can get from that combination is amazing to me.”

When you’re on TV, everybody knows you, or at least thinks they know you. Take Kevin Eubanks, who was on NBC’s Tonight Show five nights … END_OF_DOCUMENT_TOKEN_TO_BE_REPLACED

Jimmy Katz leads many lives. He is the preeminent currently active jazz photographer, and has shot more than 200 magazine covers and over 600 recording … END_OF_DOCUMENT_TOKEN_TO_BE_REPLACED

Take a look at Blue Note Records’ release schedule for 2022 and it’s hard to miss the significant percentage of electronic-oriented music. In March, the … END_OF_DOCUMENT_TOKEN_TO_BE_REPLACED

Those who are only familiar with bassist Martin Wind’s jazz credentials—both as a leader and as a first-call sideman for Bill Mays, Dena DeRose, Ken … END_OF_DOCUMENT_TOKEN_TO_BE_REPLACED