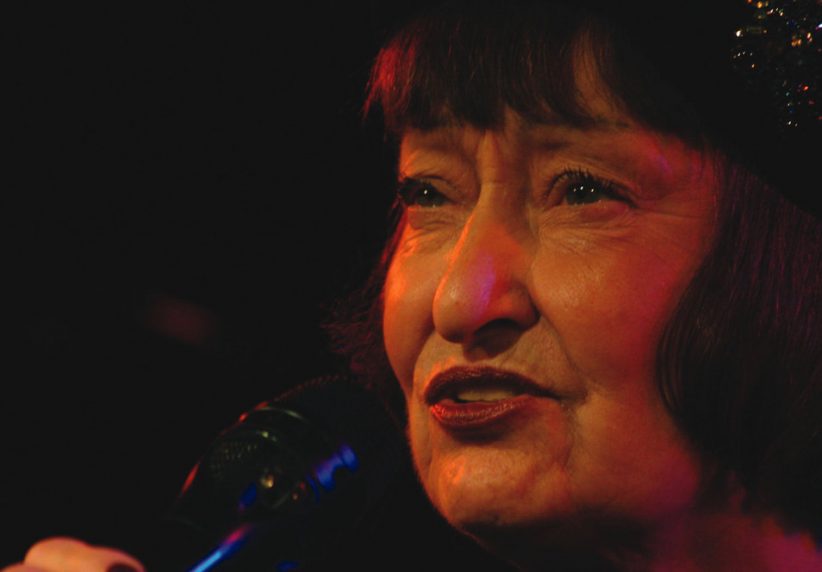 To celebrate her 80th birthday last November, Sheila Jordan hired a string quartet to accompany her regular trio of longtime collaborator and pianist Steve Kuhn, bassist David Finck and drummer Billy Drummond in a weeklong engagement at Dizzy’s Club Coca-Cola in New York. “I wanted to sing with a string quartet ever since I heard Bird With Strings,” confides the lifelong Charlie Parker fanatic. “I had worked with strings before at a festival in Vancouver, also a few times in Italy, but I had never done it in the States. And to work with strings in New York, a city I love so much, was a special treat for me. I told myself, ‘I don’t care what it costs me; I’m gonna make it happen.’ So it was my 80th birthday gift to myself.”

Her Dizzy’s gig turned out to be a major triumph. Canadian cellist Harold Birston, who had worked with Jordan before in Vancouver, wrote some special arrangements for the occasion, including a rendition of Parker’s “Confirmation” that incorporated a note-for-note transcription of Bird’s two-chorus solo. With violinist Mark Feldman also contributing virtuosic solos on pieces like Tom Harrell’s “Out to Sea,” Dave Frishberg’s “Heart’s Desire,” the Dietz-Schwartz standard “Haunted Heart” and a clever medley of Frank Loesser’s “Inch Worm” and Larry Gelb’s “The Caterpillar Song,” Jordan sang impressionistic curlicues around the notes, never quite landing directly on them but rather fluttering around them as if in zero gravity. And she delivered each tune with such personal flair and old-school charisma that she quickly won over the adoring Dizzy’s audience.

“Thank you, my dears, my darlings,” she would say to them after each round of applause. And her casual between-song banter, in which she shared anecdotes about her amazing journey from small-town poverty to the heights of bebop to her current status as a grand dame of jazz, was both entertaining and revealing.

You can hear that kind of openness and instant rapport with her audience on Jordan’s latest recording, the live Winter Sunshine (Justin Time). Recorded at the Upstairs club in Montreal during the frigid month of February, Jordan warms up the audience with her inventive takes on George and Ira Gershwin’s “Lady Be Good,” Bobby Timmons’ “Dat Dere” with Oscar Brown Jr.’s playful lyrics, and Bronislaw Kaper’s “All God’s Chillun Got Rhythm,” which segues neatly into Miles Davis’ “Little Willie Leaps.” But she makes her biggest impact with her autobiographical tunes “The Crossing,” written after her recovery from alcoholism, and “Sheila’s Blues,” a starkly dramatic tune that she recorded on four previous occasions and which has been her crowd-pleasing set closer for years.

“Sheila’s Blues” tells the tale of little Sheila Jeanette Dawson. Born on Nov. 18, 1928, in Detroit, she was raised by her grandparents in the coal-mining town of Ehrenfield, Pa. (aka “Scoopy Town”). “Mother had me when she was 17,” she explains. “And since she and my father were not together, I was sent to live in Pennsylvania with my grandparents while my mother stayed in Detroit to work in the factory.”

She grew up there in a house with six relatives. “My aunts and uncles were more like my brothers and sisters,” she recalls. “In fact, one uncle was six years younger than me. We had no heat or plumbing in our house and food was scarce. And there was a lot of alcoholism in my family. My grandmother and grandfather did the best they could but we were very poor and there was a lot of suffering. It was not a happy childhood.”

She also remembers as a child serenading the out-of-work coal miners at a local beer garden that her grandmother would frequent. “She used to take me up to these different beer gardens and there would be live music and then they’d get me up there to sing. And my grandma used to say, ‘When they throw money at you, don’t stop singing. Don’t pick it up until after you’re through singing.'”

By the time Jordan returned to Detroit as a teenager, she met hipsters Skeeter Spight and Leroy Mitchell and formed a kind of Lambert, Hendricks and Ross-styled singing group with them. Along with fellow Bird fanatics like Barry Harris, Kenny Burrell and Tommy Flanagan, they would follow Charlie Parker from places like the Club Sudan to El Sino to hear him play. Since they were all too young to get into the clubs, they would invariably hang out in the alley and peek into the back window to catch a glimpse of Bird in flight. “One time he came out between sets and played his sax to us kids standing out there in the alley,” she recalls. “I’ll never forget that night.”

In Detroit, Jordan dated saxophonist Frank Wess, though the sight of an interracial couple in late-’40s Detroit was a cause for agitation among the locals. “There was so much racial prejudice, it was terrible,” she says. “I was always being hassled, constantly down at the police station being questioned as to why I hung around with black people. Of course, those were not the words they used. I hated that other word they used. … I can’t even say it. The police would constantly stop me and my black friends for no reason, coming to and from the clubs, and they’d ask where I lived, how old I was, where I was going. It got to be a real drag, so I finally decided to split. The racial prejudice drove me out of Detroit. But I was ready to leave anyway to go follow Bird’s music to New York.”

Shortly after arriving in town in 1951, Jordan began studying with Lennie Tristano and hanging at Minton’s Playhouse in Harlem after hours. Around this time she also took up with Bird’s piano player, Duke Jordan. “I had met Duke in Detroit and got reacquainted with him in New York,” she says. “Somehow we started going out and we ended up together and got married in 1952. It wasn’t a happy marriage but the nice thing about that was, he was with Bird at the time. So anytime Bird had a gig, I could go and hear him. And Bird would always ask me to sit in.”

In 1955, Sheila gave birth to her daughter Traci. That same year, her hero Charlie Parker died. “Of course, I was devastated,” she says, “but I wasn’t surprised, in a way. He had fallen prey to this baffling, powerful disease of heroin addiction. He was in bad shape mentally and physically. He was really such a sweet and caring man but the drugs and alcohol made him a different person.”

A few years later, Jordan began singing at the Page Three, which is where composer George Russell first heard her. He recruited Jordan to contribute haunting, ethereal vocals on a unique arrangement he had written on “You Are My Sunshine,” a tune that she used to sing to the out-of-work coal miners in Scoopy Town. That session for Russell’s 1962 Riverside recording The Outer View was her first-ever recording, and led to her own date for Blue Note, Portrait of Sheila, which was recorded later that year and released in 1963. “And then I didn’t record again for about a dozen years,” she says. “I’m not a pusher. I don’t go out there and push. I don’t know how to do that.”

Although Jordan has only 21 albums as a leader to her credit in her 60 years as a vocalist, she has made countless appearances in nightclubs and at festivals all over the world. And every time she hits the stage, she continues to pay tribute to her idol and main inspiration, Charlie Parker. “I cannot let this man’s name die,” she says. “I constantly talk about Bird because some people forget about him or they put him on a back burner. But he’s too important to me. I wouldn’t be sitting here today if it weren’t for Bird.

“It’s amazing because every time I need an uplift, his music picks me up,” she says. “The first time I heard Bird was on a jukebox. It was a version of ‘Now’s the Time’ by Charlie Parker and his Reboppers, and as I listened to it the hair stood up on my arms. I heard three notes coming out of that jukebox and I said, ‘Oh, my God, that’s the music I’ll dedicate my life to!’

“Then, just yesterday, I was feeling kind of down,” she continues. “I went into a Japanese restaurant and ordered some miso soup, and just as soon as I put the spoon to my mouth … what comes on? Charlie Parker playing ‘Now’s The Time.’ And as I sat there listening to Bird, I said to myself, ‘Yeah, everything’s all right with the world.'”

Jordan still lives in the same Chelsea apartment where she has resided for the past 44 years, within walking distance of some of the Greenwich Village clubs where she used to play during the early ’60s, like the Page Three. “You know, I never thought I’d live to be this old,” she laughs as we finish our tea. “But you can’t fight it. There’s nothing you can do about it, except grow old gracefully. That’s what I want to do.”

When you’re on TV, everybody knows you, or at least thinks they know you. Take Kevin Eubanks, who was on NBC’s Tonight Show five nights … END_OF_DOCUMENT_TOKEN_TO_BE_REPLACED

Jimmy Katz leads many lives. He is the preeminent currently active jazz photographer, and has shot more than 200 magazine covers and over 600 recording … END_OF_DOCUMENT_TOKEN_TO_BE_REPLACED

Take a look at Blue Note Records’ release schedule for 2022 and it’s hard to miss the significant percentage of electronic-oriented music. In March, the … END_OF_DOCUMENT_TOKEN_TO_BE_REPLACED