Skip to content
Become a member and get exclusive access to articles, live sessions and more!
Start Your Free Trial
Home > Features > Seth MacFarlane: From Cartooning to Crooning 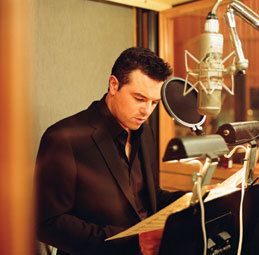 From a cursory glance, Music Is Better Than Words (Universal Republic) seems like the very type of album that Seth MacFarlane would lampoon on his satirical TV shows Family Guy and The Cleveland Show. The disc showcases the 37-year-old award-winning comedian and voice actor fronting a 55-piece orchestra and singing gems from the 1950s. In an increasingly bloated field of pop figures and actors tackling the venerable Great American Songbook with big-budgeted releases, jazz purists continue to give these projects the sinister side-eye.

“If I was doing a pop record in the style of Lady Gaga, there would be no way that I could not make fun of it. But this style of music and these musicians are the real deal,” MacFarlane explains over the phone, while taking a break from directing his first full-length film, the live-action Ted. “Family Guy viewers are very aware that I take the music side of things very seriously, [and that] this is not that much of a stretch. I’ve done a couple of numbers on the show as Brian, the dog. And those have been pretty straightforward jazz ballads and they sounded not that much different from this record.”

Music is certainly a huge part of MacFarlane’s artistic repertoire. His popular FOX TV cartoons-the two aforementioned shows and American Dad!-often feature zany, spirited musical interludes. But it was his half-hour variety show with Alex Borstein, niftily titled Seth & Alex’s Almost Live Comedy Show, that inspired Universal Republic to offer MacFarlane a record deal. Given MacFarlane’s established reputation as a comedian, it’s understandable that the label was initially vying for a hot comedy record. “I said that I was so immersed in comedy 24/7 that it’ll be nice to do something different,” he recalls. “I thought it would be fun to do a legit orchestral jazz album of music that was really popular during the early and late ’50s.”

Once Universal Republic gave MacFarlane the green light, he recruited collaborator Joel McNeely, who occasionally composes scores for American Dad! , to produce the sessions and to write the lush arrangements of songs associated with Frank Sinatra, Dean Martin, Bing Crosby and Sammy Davis Jr. To give the sessions a deeper sense of vintage authenticity and risk-taking, MacFarlane sang in front of the orchestra and recorded it on analog reel-to-reel tape at Capitol Studios. MacFarlane used the original Neumann U 47 mic that Sinatra and Martin sang into, and drummer Peter Erskine played a vintage Slingerland kit with calfskin heads.

“You hear a lot of attempts to duplicate that sound in present-day recordings, but there’s always something that’s just a little bit off. Generally, it’s one or two things: The recording quality is too pristine, without a lot of warmth to it, or the arrangements are not sophisticated enough,” MacFarlane says. “If you look back at the recordings that Nelson Riddle, Gordon Jenkins and Billy May did, they were complex and very difficult to play. Joel was really up to that task and orchestrated the album to that level.”

The result is a luxurious big-band vocal album that showcases MacFarlane’s mellifluous, sometimes swank baritone on lesser-known compositions such as Richard Rodgers and Oscar Hammerstein’s “Something Good,” Johnny Burke and Jimmy Van Heusen’s “It’s Anybody’s Spring” and Ray Henderson, Buddy DeSylva and Lew Brown’s “You’re the Cream in my Coffee.” MacFarlane shares the vocal spotlight with Norah Jones on Hoagy Carmichael’s “Too Sleepy People” and Sara Bareilles on Van Heusen and Sammy Cahn’s “Love Won’t Let You Get Away.” “We set out to do songs that hardly anybody else touched but are still great songs,” says MacFarlane. “As a result, there are only a couple of songs on the album that have been recorded as swing tunes.”

Music Is Better Than Words also features “She’s Wonderful Too,” an original composition by MacFarlane and McNeely. “It was a sizeable undertaking; this is the real deal without any comedy to hide behind,” MacFarlane enthuses. “I felt fantastic about it once we got out of that studio. I could not have been happier with the results. I’ve loved this music my whole life and had wanted to do something like this for a very long time.”

“I always knew Seth was a fine singer, but you never really know about how an artist responds to the studio environment, especially doing live takes with the orchestra,” McNeely adds. “Seth came in incredibly prepared and focused. He knew exactly how he wanted to approach every song, from tempo to phrasing. His consistency and sense of spot-on pitch is uncanny.”

n Songbook traces back to his childhood in the small town of Kent, Conn. Even though he was far removed from New York City’s Broadway, his parents, Ann Perry MacFarlane and Ronald Milton MacFarlane, both sang and instilled in him and sister Rachel the joys of show tunes. “My parents were very adamant about exposing my sister and me to all the classical musicals-The Sound of Music, West Side Story, The Music Man-all the big shows that you can go through your childhood without seeing,” he recalls.

Instead of launching headlong into a music career after graduating from the Rhode Island School of Design, however, MacFarlane landed a job as an animator and writer with the legendary animation production company Hanna-Barbera. There, he worked on such shows as Johnny Bravo, Cow and Chicken and Dexter’s Laboratory. Singing, however, never left him. “Voice acting is something that I really didn’t get into until I started doing Family Guy. I had been singing for a lot of years. I had done a lot of theater-oftentimes character work. Certainly with Family Guy, music is always a big part of it. We use a sizeable orchestra every week for that show, anywhere between a 50- or 90-piece. So I’ve kept my singing training up over the years.

“I trained with Lee and Sally Sweetland, who had been training vocalists for years; they’ve worked with Frank Sinatra and Barbra Streisand. They really understand that [1950s big-band] style of singing. There are no smoke and mirrors: You just get in that room and there’s a microphone and the orchestra, and you sing-and you had better be good. That’s how we did this record.”

When you’re on TV, everybody knows you, or at least thinks they know you. Take Kevin Eubanks, who was on NBC’s Tonight Show five nights … END_OF_DOCUMENT_TOKEN_TO_BE_REPLACED

Jimmy Katz leads many lives. He is the preeminent currently active jazz photographer, and has shot more than 200 magazine covers and over 600 recording … END_OF_DOCUMENT_TOKEN_TO_BE_REPLACED

Take a look at Blue Note Records’ release schedule for 2022 and it’s hard to miss the significant percentage of electronic-oriented music. In March, the … END_OF_DOCUMENT_TOKEN_TO_BE_REPLACED