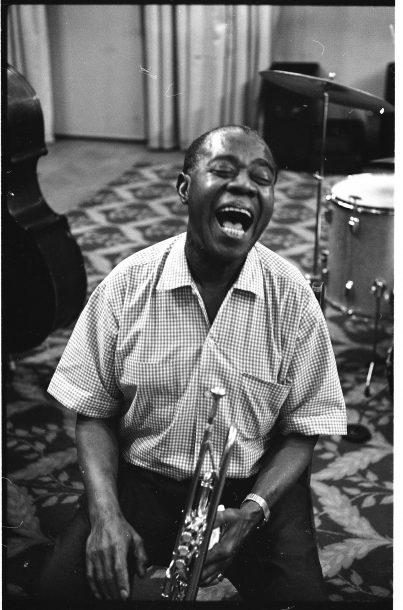 Louis Armstrong in a rehearsal for the album "Disney Sings the Satchmo Way," Hollywood, May 1968 (photo: Jack Bradley) 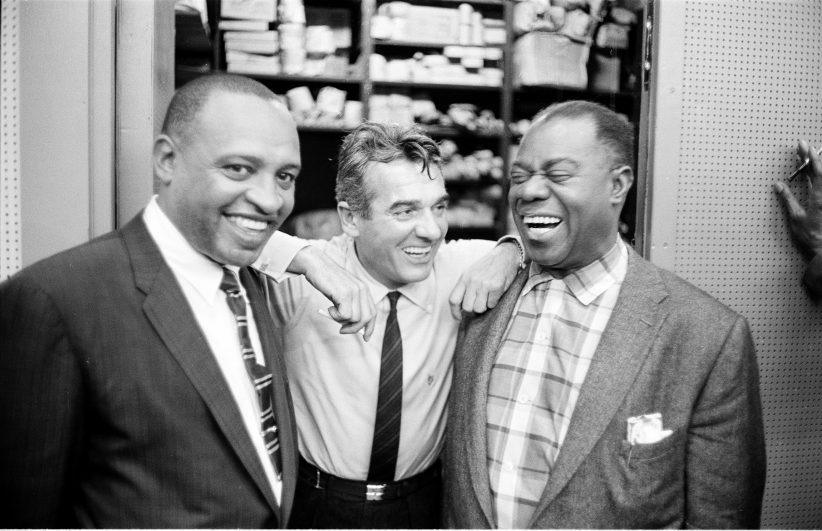 Left to right: Lionel Hampton, Gene Krupa, and Armstrong pose for a photo at a rehearsal for the Timex All Star Jazz show, April 30, 1958. (photo: Maynard Frank Wolfe) 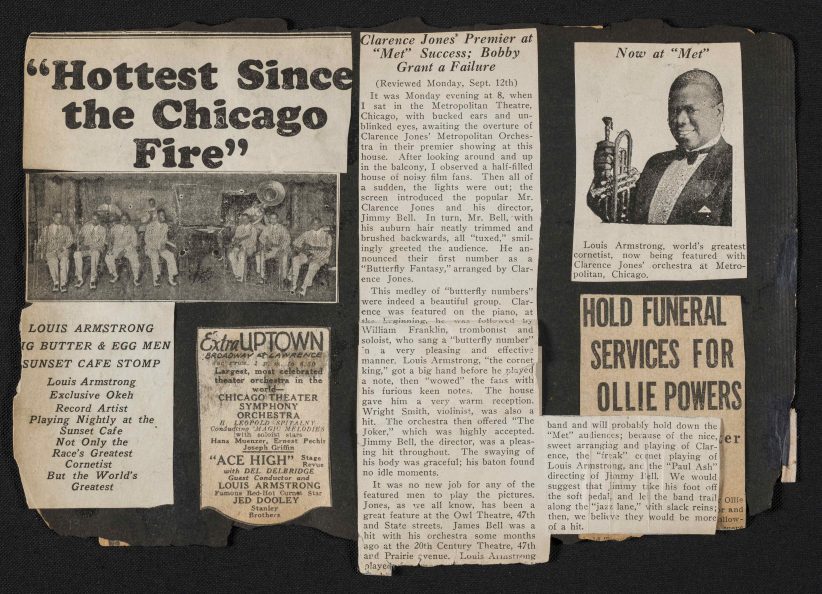 A page from one of Louis Armstrong's scrapbooks, containing newspaper clippings from 1927 and 1928 (courtesy of the Louis Armstrong House Museum Collections) 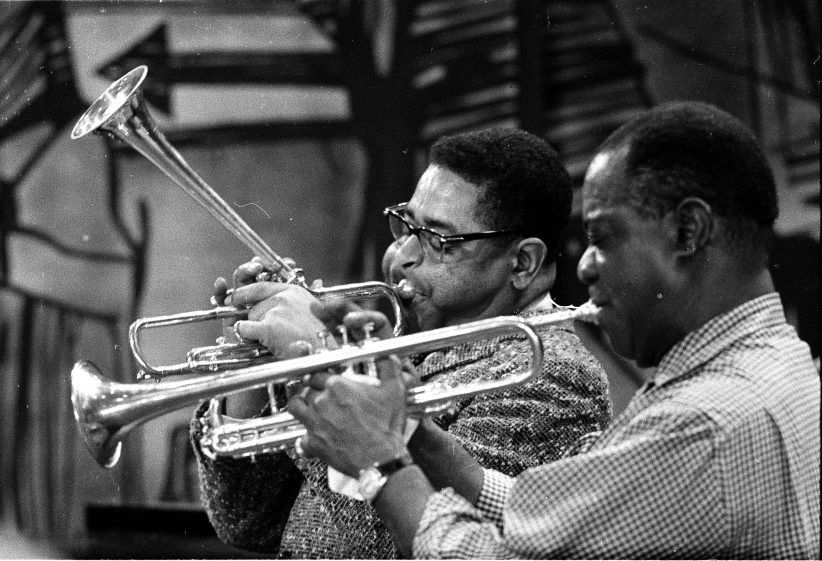 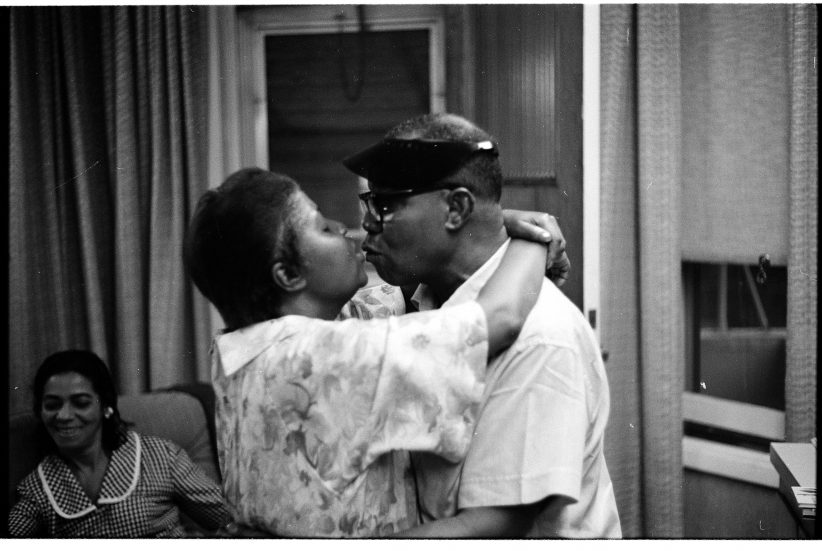 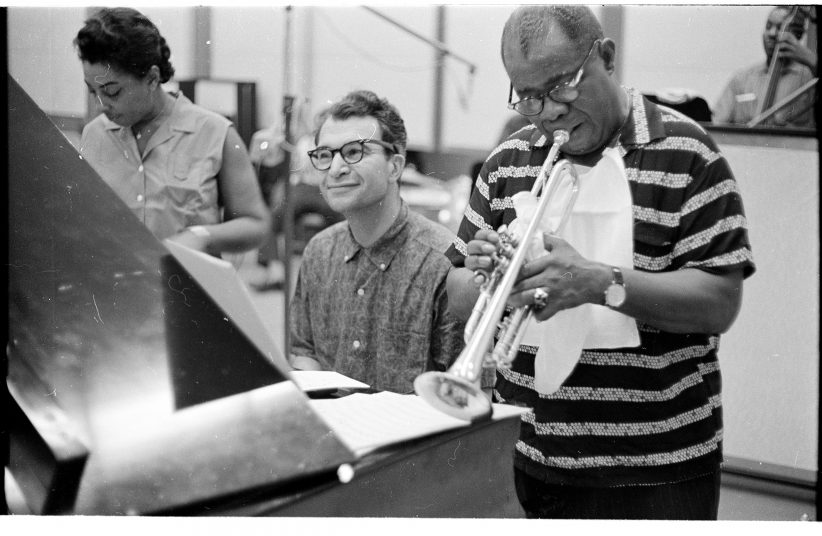 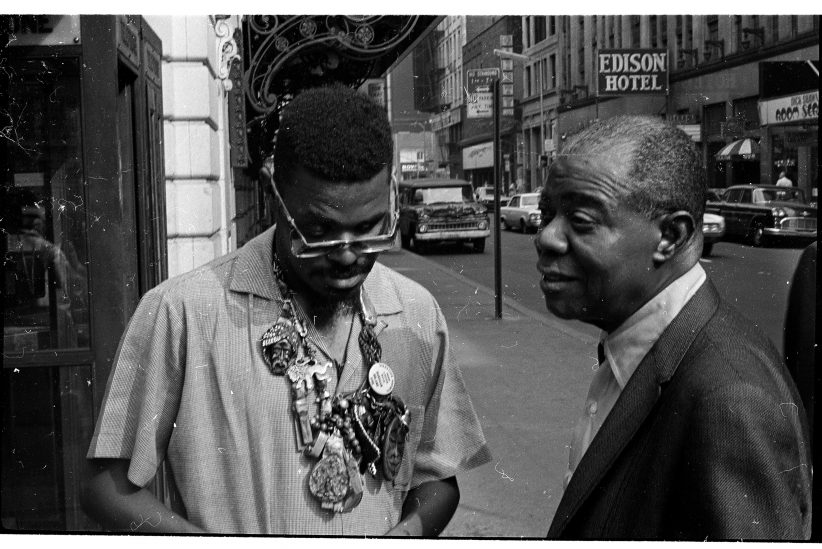 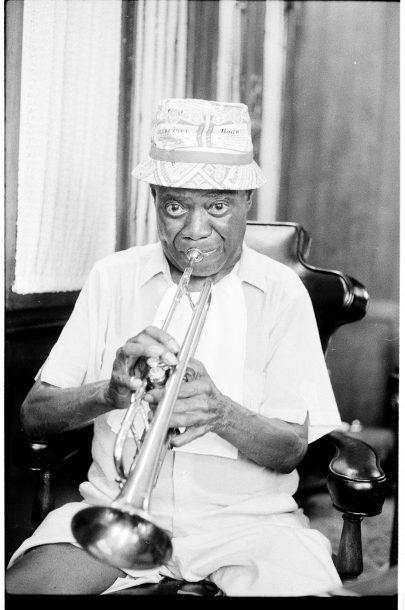 Photo above: Louis Armstrong in a rehearsal for the album Disney Sings the Satchmo Way, Hollywood, May 1968 (photo: Jack Bradley). This is one of approximately 16,000 photographs that are part of the online Louis Armstrong House Collections; see more in the slideshow.

The Louis Armstrong House Museum Collections—constituting “the world’s largest archives for a single jazz musician,” according to Ricky Riccardi, the institution’s Director of Research Collections—have long been available to the curious eye. “The archives have been open to the public since 1994,” Riccardi notes. “But it’s always been by appointment only, and you needed to come to Queens College [in Queens, N.Y.].” Those limiting factors, once a deterrent or at the very least an expense on multiple fronts, are now a thing of the past. The holdings have been digitized and, as of the housing website’s launch in November of 2018, any item in the archives can be accessed from anywhere across the globe.

The digitization of these materials marks a new frontier for a painstaking project of documentation and preservation that’s essentially been in motion for 35 years. “Louis died in ’71, his wife Lucille died in ’83, and their house [in the Queens neighborhood of Corona] was filled with all of Louis’ stuff,” Riccardi explains. “In her will, Lucille left the house to the City of New York, the city kicked it over to the Department of Cultural Affairs, and they chose Queens College to administer everything. That was part one. Part two was the [handling of the] Louis Armstrong Estate, which [now exists as] the Louis Armstrong Educational Foundation. Lucille left all of the artifacts—all of the memorabilia—to this foundation. They, in turn, donated all of that to Queens College.”

In 1991, those materials—72 boxes of Armstrong’s personal belongings—were carefully packed and moved to the college. Michael Cogswell was then hired as the archivist, and he spent three years arranging, preserving, and cataloging all of it. The archives were finally made available to the public in 1994, at which point Cogswell made the decision to keep collecting.

The Louis Armstrong House Museum now manages 12 separate collections, including those of Jack Bradley, Armstrong’s longtime friend and photographer; Phoebe Jacobs, Lucille’s partner in championing Louis after his passing and a one-time executive vice president of the educational foundation; and Ernie Anderson, who produced several historic Armstrong concerts and helped with his overseas publicity in the ’40s and ’50s. Incredibly, all of it can be found on this new website.

“Everything—I’m talking from photographs to negatives to films, and sheet music and scrapbooks and magazine articles, concert programs, Louis’ reel-to-reel tapes, his collages, record collection—has been scanned in some way,” Riccardi reports. “We hired a firm called Deluxe Media Recall, based in California, and they sent in a husband-and-wife team—John and Dariene Dopp—that moved to Queens [for this sole purpose]. We gave them a room in Queens College, and they came in and just scanned five days a week, from 7:30 in the morning until 5:30 at night. They had every kind of setup imaginable: flatbed scanners, camera setups, overhead setups, special machines to do negatives. That team did all of the paper documents, all of the magazines, all of the film. Then Deluxe also had an oversized scanner out in Seattle, so we mailed them all of our posters—concert posters, movie posters, anything that really couldn’t fit under a regular scanner. And they also had a film unit in Northvale, New Jersey. They transferred our VHS tapes, Betamax tapes, U-matic tapes, DVDs, 16mm film, you name it.”

Although Deluxe Media Recall worked on the majority of the assets, certain items were outsourced to other expert organizations and individuals. The Northeast Document Conservation Center, for example, did imaging and conservation work on more than 111 scrapbooks, 83 of which belonged to the Armstrongs. And Andreas K. Meyer of Meyer Media—a Grammy-winning audio engineer—worked on acetate discs, cassette tapes, and other outmoded audio formats. All told, it took two years to bring this entire physical body to the digital realm, which was made possible by a $2.7-million grant from Robert F. Smith’s Fund II Foundation. Smith, the wealthiest African-American in the world, reached out to the Louis Armstrong House Museum himself. His vision for a digital future and passion for African-American history aligned with the organization’s goals, so he granted the funds in early 2016 and the actual work began in earnest in November of that year. Only two full-time employees were helming the ship and coordinating with contracted companies—Riccardi and Sarah Rose, the museum’s research collections manager—but they saw everything through to this launch point and will continue to work on new acquisitions.

In terms of data, the website holds more than 15 terabytes. But if you’re looking for more concrete numbers, Riccardi estimates that 16,000 photographs, 750 reel-to-reel tapes, 2,000 recordings (including concerts and radio broadcasts), and 350 videos are in the mix. And it’s all readily accessible. “You can actually search for ‘color photo, Louis playing,’ ‘Louis singing,’ or ‘Louis in the recording studio,’ and get everything we have,” he explains. “If you’re looking for a specific subject matter—it could be Joe Glaser, Ella Fitzgerald, Jack Teagarden—you can search generally for those terms and get everything, but then you can also drill down and search for ‘photos of Jack Teagarden.’ You can pretty much search for anything, and there’s a really helpful ‘advanced search’ feature, too.”

Riccardi offers the caveat that all this material is protected to avoid unwarranted use—“everything has a watermark and everything you hear will have beeps every now and then”—but he’s just as quick to point out that it’s a small price to pay to make this Armstrong treasure trove available to the world at large. These materials will now live for the foreseeable future at collections.louisarmstronghouse.org.

When you’re on TV, everybody knows you, or at least thinks they know you. Take Kevin Eubanks, who was on NBC’s Tonight Show five nights … END_OF_DOCUMENT_TOKEN_TO_BE_REPLACED

Jimmy Katz leads many lives. He is the preeminent currently active jazz photographer, and has shot more than 200 magazine covers and over 600 recording … END_OF_DOCUMENT_TOKEN_TO_BE_REPLACED

Take a look at Blue Note Records’ release schedule for 2022 and it’s hard to miss the significant percentage of electronic-oriented music. In March, the … END_OF_DOCUMENT_TOKEN_TO_BE_REPLACED