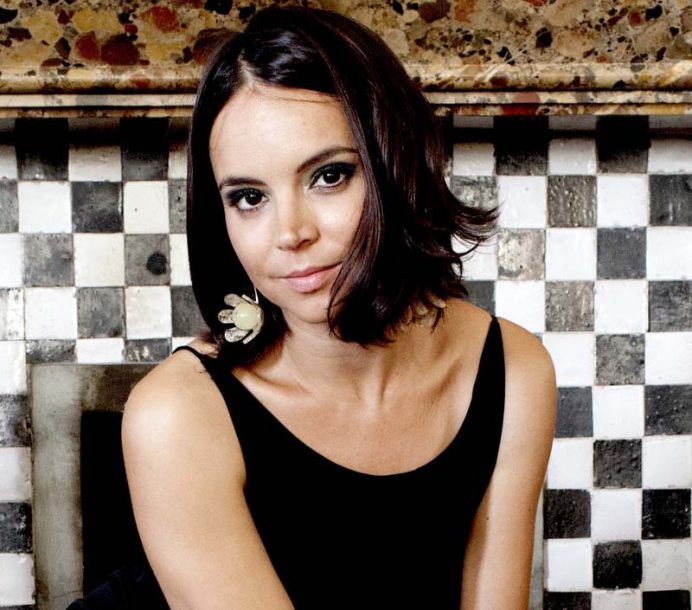 Sara Serpa places “Nada” near the midpoint of All the Dreams (Sunnyside), her luminous new collaboration with guitarist André Matos. The track is their art-song interpretation of a verse by Álvaro de Campos, one of several alter egos of the great Portuguese poet Fernando Pessoa. “Não sou nada,” Serpa sings, almost in a sigh. “Nunca serei nada/Não posso querer ser nada.” The English translation: “I’m nothing/I’ll never be anything/I cannot wish to be anything.”

Then, over a slow bloom of arpeggiated chords, Serpa resolves the musical phrase with a wordless exhalation of ahhs and oohs, before turning the self-abnegation on its head. “À parte isso, tenho em mim todos os sonhos do mundo,” she clarifies: “Apart from that, I have in me all the dreams of the world.” She’s articulating someone else’s ideas-a rather famous passage, actually, the first stanza of Pessoa’s 1928 poem “Tabacaria”-but Serpa projects enough surety of purpose to deliver the sentiment, if not completely own it. All the dreams are within her, she declares, sounding ethereal but clear, and it’s hard not to take her at her word.

Serpa, 37, has been a fresh and riveting presence on the vocal-jazz landscape for most of the last decade, though that wasn’t her original aim. Born in Lisbon, Portugal, she grew up with choral singing and classical study, pivoting to jazz only after a series of dalliances with her city’s vibrant local scene. She moved to Boston, attending Berklee College of Music and then New England Conservatory, where she encountered a guru in the august pianist and composer Ran Blake. (They have made three beautifully stark albums together: Camera Obscura and Aurora, on Clean Feed Records, and last year’s Kitano Noir, on Sunnyside.)

In 2008, shortly after Serpa completed her master’s degree at NEC and moved to New York City, she caught the ear of alto saxophonist Greg Osby, another incorrigibly original jazz mentor. For a good many listeners, this was the association that put Serpa on the map. She was featured on Osby’s album 9 Levels, which inaugurated both a band and an artist-run label, Inner Circle Music. Osby’s new crew played the Village Vanguard that August, and I saw the first set on opening night, taking note of the cool self-possession Serpa exuded even while tackling the leapfrogging intervals of a piece like “Vertical Hold.” (She scatted most of the evening’s melodies in unison with Osby’s alto, a tactic that could have exposed all manner of vulnerabilities.) Serpa also sang one of her own originals, “Praia,” the intricate, springlike title track of her own auspicious Inner Circle debut, which arrived a couple months later.

For whatever combination of reasons-the pellucid intonation, the unflappable poise, even the Portuguese mother tongue-I understood Serpa back then as an inheritor of vocal-jazz traditions from Brazil. There was, perhaps, a flicker of Flora Purim in her breezy dispatch of Osby’s melodic code, just as there was a hint of Luciana Souza in her autumnal vocal tone. And Serpa’s featured role on Providencia, a 2010 album by pianist Danilo Pérez, underscored the analogy for me, though I was only seeing part of the picture.

Serpa broadened that picture with Mobile, an album of next-level ambition released on Inner Circle in 2011. The compositions on that album are knitted together by a literary conceit, and by a theme of roving, observant solitude. Working with musicians like Matos and pianist Kris Davis, Serpa draws inspiration from authors including Naipaul, Melville and Herodotus, anchoring her lofty ideas in tactile musical exchange. The approach is writerly but largely unpretentious; I’m even more struck by it now than I was when I initially absorbed Mobile five years ago.

In retrospect, it’s clear that Serpa was already moving toward the freer, more incantatory mode of her music with Matos, whom she first met at NEC, and who’s also her husband. Their first official album as a duo was Primavera, in 2014, and it captures the deep synthesis of their styles, sounding relaxed yet alert, and disinclined to show off for showing off’s sake. Osby makes one soprano sax cameo on “Choro,” which otherwise finds Serpa and Matos tracing a folkish melody in unmetered rhythm. Elsewhere the singer and the guitarist meld in poplike ways, using multitracking as a structural tool. There’s a Pessoa lyric here, too, adapted from the poem “A espantosa realidade das coisas” (“The amazing reality of things”), which was published under another heteronym, Alberto Caeiro.

The soft, golden light that can occasionally be found on Primavera-notably on a song like “Caminho,” which feels aglow with both ancient wisdom and future vision-plays a more central role on All the Dreams. This is clearly by design. Pete Rende, whose vintage synthesizer is a distinctive timbre on “Caminho,” also plays on several tracks of the new album, two of which are bookends: “Calma,” the tranquil opener, and “amlaC,” the trippy closer, a kind of mirror image complete with backwards vocals. Some tracks feature Matos on electric bass in addition to guitar. Some feature Serpa singing in a braided counterpoint with herself. The only other musician on the album is Billy Mintz, whose drumming is less heard than felt.

Melody and mood, more than any kind of pyrotechnics, provide the album’s guiding principle. A number of the original songs, including Serpa’s wistful “Lisboa” and Matos’ bittersweet “Estado de Graça,” stuck with me for days after I first heard them, casting a spell. The same held true of a twinkling, reverberant adaptation of the William Blake poem “Night.”

Still, Serpa and Matos clearly chose the right scrap of poetry to provide the album with a title phrase. “Nada” lays out a philosophical reverie in calm, plainspoken terms. And its play of modest interiority and boundless capacity feels true to the dreamer in question, as she playfully evades all expectations.

When you’re on TV, everybody knows you, or at least thinks they know you. Take Kevin Eubanks, who was on NBC’s Tonight Show five nights … END_OF_DOCUMENT_TOKEN_TO_BE_REPLACED

Jimmy Katz leads many lives. He is the preeminent currently active jazz photographer, and has shot more than 200 magazine covers and over 600 recording … END_OF_DOCUMENT_TOKEN_TO_BE_REPLACED

Take a look at Blue Note Records’ release schedule for 2022 and it’s hard to miss the significant percentage of electronic-oriented music. In March, the … END_OF_DOCUMENT_TOKEN_TO_BE_REPLACED

Those who are only familiar with bassist Martin Wind’s jazz credentials—both as a leader and as a first-call sideman for Bill Mays, Dena DeRose, Ken … END_OF_DOCUMENT_TOKEN_TO_BE_REPLACED