My newest installment in the “In Service of Jazz” series—featuring the unsung heroes of the jazz world, those who support the art and the artists through their own talents and hard work only because of their love of the music—is Sandy Jordan. Sandy, the widow of the great tenor saxophonist Clifford Jordan, is a truly beloved member of the jazz community: quietly lending a helping hand here, there, and everywhere, supporting her favorite musicians with her presence at all kinds of musical events. She is a visual artist who designed many of the LP covers for the legendary Strata-East label and still designs covers, ads, flyers, programs, etc. for jazz artists. Sandy is a founding member of both the Jazz Foundation of America and the Wilbur Ware Institute, and still serves on both foundations’ boards. She was a voting member of NARAS (the Recording Academy) for over 25 years.

Here is her story in her own words, shaped and edited by me, as we rambled recently over snacks and wine.

SANDY JORDAN: I am from the Baltimore area, from a little hamlet called Relay. It was all-white but we were there first; my family settled there in 1863. The town grew up around us. Relay got its name because the B & O Railroad runs right by it and had a relay station there. The first Morse code message was sent from that station.

I was already listening to the music—nobody particularly called it jazz, it was just instrumental music—in my early teens. Every night I turned the radio on to Chuck Richards’ show [on Baltimore’s WBAL] while I washed the dinner dishes, then did my homework. He played everybody: Lionel Hampton, Dizzy, Louis Jordan, Duke, etc. By the time I was 13 or 14, doo-wop was out and I loved it! Chuck Richards would put on 15 minutes of doo-wop; he called this “the Teenage Corner,” and he would play three doo-wop songs. I would listen to the whole show for an hour and a half, waiting for my three songs—just listening and humming and waiting. So I ended up listening to jazz every night, when I think back on it.

When I was in high school there were two teenage jazz clubs in Baltimore. One was the Yardbirds and one was the Interracial Jazz Society, which later became Left Bank. Gary Bartz was in that one, and I was in the Yardbirds. We would have meetings in saxophonist David Hubbard’s basement. We played records, danced, talked, and kept up with new records coming out. David’s mother would give us potato chips and sodas. I think I really joined because my girlfriend said, “Sandy, join this jazz club with me! There are the cutest guys in it!” And I said, “Okay!” When I joined I already knew about a lot of the records because I’d been listening to Chuck Richards every night.

One of the kids’ parents in the club took us all to our first live jazz show. He organized it for both the clubs to go down to Club Casino on Pennsylvania Avenue—that was the 125th Street of Baltimore in those years. Miles Davis was playing there. The room had a little platform in the back, like the Vanguard has, and they had Coca-Colas for us on the tables already, that’s where we had to sit: Miles, Coltrane, Paul Chambers, Philly Joe [Jones], and Bill Evans. Can you imagine! My first show. I loved it. And I believe Gary Bartz was there too in our group.

A Natural Artist
I always loved drawing when I was little. I actually wanted to be a teacher when I was small, until I realized that I could become an artist and make a living. All the way through school the teachers had me doing the murals that we made for every occasion. In the old days when we had fixed blackboards in the classroom, the corner blackboard was the seasonal blackboard for the calendar, etc. So if it was April, I had to draw April showers, umbrellas, spring things. It was always my job to draw and design that board because I was the only artist in my class.

“Sandra, will you please come up here and draw this,” the teachers would say about anything they wanted drawn. They really used me up! One teacher, seventh grade, Mr. Cunningham, decided he wanted a mural of a scene from the Revolutionary War and got me a picture from a history book to copy. So there I was painting on a big sheet of brown craft paper—in a very primitive way—all these horses and people. I had no training but I loved to do it. [The drawings] were never photographed—they probably weren’t worthy anyhow, so at the end of the year, they just threw the stuff away…

My school, Banneker, was a segregated school that went from the first through the 12th grades. It was named for Benjamin Banneker, a black man who invented one of the first alarm clocks, among other things. He helped lay out Washington, D.C., in the 1700s and corresponded with Thomas Jefferson. He had a farm near my town, it’s a museum now. The old school, before Banneker was built, was simply called “the colored school” and only went to the seventh grade. That’s where my mother went. If kids wanted more education, their families had to pay to send them into Baltimore City because there were no black high schools in the county. My grandfather did pay to send two of my aunts to high school, but by the time my mother was ready he had died and there was no money for that. I started first grade at Banneker in 1946.

The Big Break
I started to get [art] training when I was 13 years old. My aunt was a personal maid and she was always bragging to the woman she worked for about her niece who could draw. This lady said, “Let her come and draw me!” So I did. I went with my aunt and—I didn’t know any better—I drew her exactly as she was, little wrinkles, double chins. She had a good laugh over it. She said, “Hester, your niece draws exactly what she sees!” And she signed me up for this art class on Saturday mornings at a small private art school downtown. She really did that! She sent me there till I was 15 and then she died. But my aunt didn’t want me to stop, so the family scraped together enough money to let me keep going and enrolled me for the Saturday art courses at the Maryland Institute of Art, and this is when I studied commercial art because I could not afford the luxury of becoming a painter. I was at the Maryland Institute until I graduated high school.

Meanwhile they had integrated the schools [in 1955]—and I had to go through that horror. I left Banneker after ninth grade and went to Catonsville Sr. High. Thirteen of us left Banneker to join a white student population of over 900. The art teacher, Mr. Louis Orendorf, really worked with me and encouraged me. He’s the one who said, “You want to go to New York to go to art school.”

Now I was born on New Year’s Day, and the local black doctor who delivered me, because of that, said to my mother, “I will pay for this child’s first year in college.” Dr. Maloney—he had no idea! He probably thought I’d be going to Morgan State! I applied to two New York schools, Cooper Union and Pratt. I got into both and even though Cooper Union was a free school, I chose Pratt—$3,000 a year tuition! Cooper Union did not have a commercial art course at that time. Dr. Maloney was as good as his word and paid for the first year. I could handle things after that. I worked, got loans, and paid my way.

Pratt was in Brooklyn, just about 10 blocks from the Coronet, the most popular Brooklyn jazz club. Most major acts that came to Manhattan would usually also come to the Coronet before they moved on. My roommates were jazz fans. One was from Connecticut but she had a boyfriend from Brooklyn, and he would just take us all around, all the time. Jazz was cheap then. You could go anywhere. Plus our instructors were always sending us out to sketch and/or take photos. A lot of us would go to Birdland and the Half Note.

When I graduated I tried going home to look for a job there but it didn’t work out. The places I applied—they were still fresh out of the Dark Ages. I would bring in my portfolio and they would just look at me … at one agency the art director took my portfolio and looked at it in the hallway! In the hallway! I said to myself, “I need to go back to New York.” Which is what I did. I called my landlord and said, “Save my apartment! I’m coming back!” And he did. Originally Published March 6, 2019

In his new book Heart Full of Rhythm: The Big Band Years of Louis Armstrong, Ricky Riccardi—director of research collections for the Louis Armstrong House … END_OF_DOCUMENT_TOKEN_TO_BE_REPLACED

Kenny Washington, the jazz vocalist (not to be confused with the drummer of the same name), has always taken his time. After a 35-year career … END_OF_DOCUMENT_TOKEN_TO_BE_REPLACED

“Honestly, at first I was a little worried about it coming off as trite,” says Ike Sturm, bassist for the acoustic duo Endless Field, about … END_OF_DOCUMENT_TOKEN_TO_BE_REPLACED 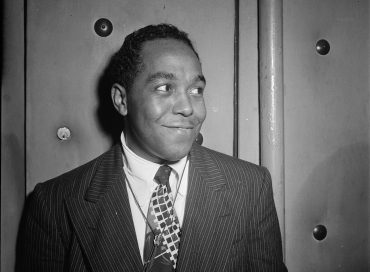 It is November 26, 1945 in New York City, the Monday morning after the Thanksgiving holiday weekend, and producer Teddy Reig has arrived at the apartment … END_OF_DOCUMENT_TOKEN_TO_BE_REPLACED