Skip to content
Become a member and get exclusive access to articles, live sessions and more!
Start Your Free Trial
Home > Features > Rudresh Mahanthappa: Do You Speak Indian? 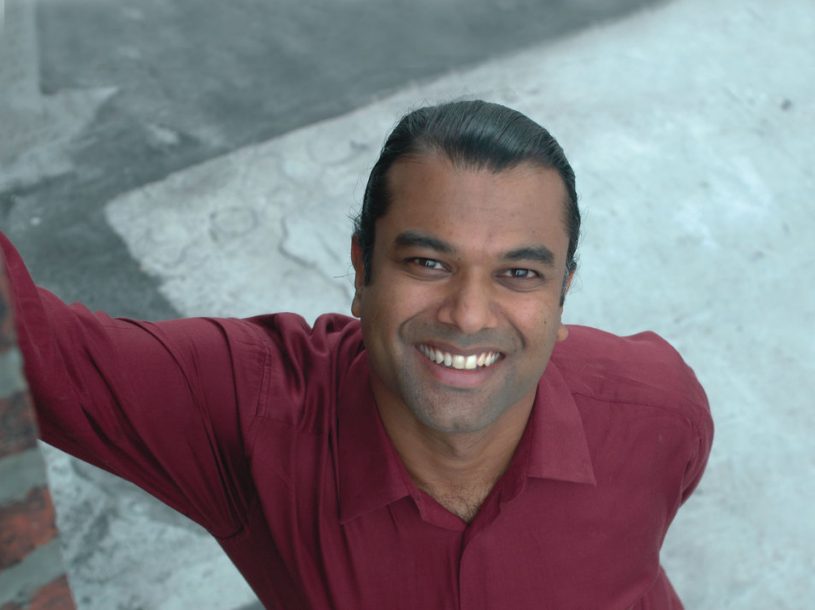 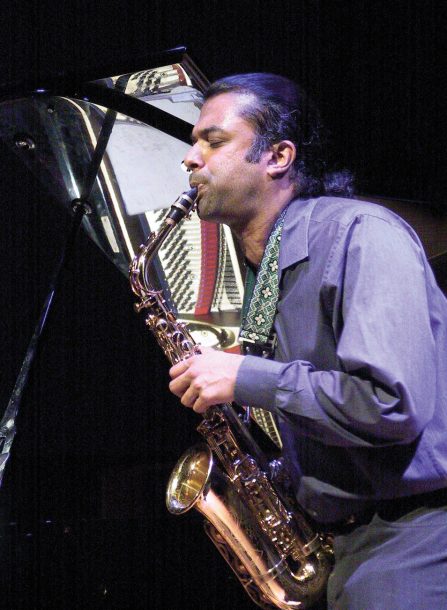 Listen past the end of Rudresh Mahanthappa’s third album, Mother Tongue: Do You Speak Indian? (Pi), and you’ll hear the alto saxophonist and composer say the following: “No, I don’t speak Indian. There isn’t such a language. I speak English. My parents speak Kannada, which is a language spoken in the state of Karnataka, in the south of India. There are many different languages in India….”

You’ll also hear a jumble of other voices-all fellow Indian-Americans speaking a version of the same statement, in their own mother tongues. They are telling us that India does not possess a singular culture, nor do Indian immigrants and their children carry a singular history. But Mahanthappa isn’t simply venting about ignorance and ethnocentrism; he’s highlighting the inherent music of speech itself. He wrote most of the pieces on Mother Tongue using melodic material derived from these very speech recordings.

To gather samples of the different languages, Mahanthappa sought volunteers to leave prepared statements on his voicemail. He saved the messages as digital files and then set about transcribing them melodically. “I went first to family,” Mahanthappa recalls. His mother spoke the Kannada example, his father-in-law the Gujarati. “The other ones were more about getting on Indian listservs and letting people know what I was doing,” he says, adding that he chose to focus only on Indian languages spoken in America. “Some people were shy about speaking a language they didn’t really speak that much anymore. But to me that was part of the process. If you feel shy about it or if it’s rusty, I want to document that, too.”

With raw transcriptions in hand, Mahanthappa began to compose, and the sky was the limit. One option was to play along with the tapes, as Jason Moran did with Turkish and Chinese transcriptions on his 2003 Blue Note release The Bandwagon. But this didn’t suit Mahanthappa. “That [approach] is fascinating, but what happens there is you force it into a key center. I wasn’t interested in that and it’s been done before,” citing not only Moran, but Janacek, Hermeto Pascoal and others.

Instead, Mahanthappa used the transcriptions like putty, elongating or isolating portions and even quantizing entire examples with Melodyne software. “You end up having to average those notes to an extent; you can’t play all of them. The rhythms that come out of the raw transcriptions are just insane. I’m not even sure I could deal with playing those. As far as making a tune out of it, one thing I would do is double the note values. And to make it playable on the saxophone I had to displace some stuff by octaves. But [the transcriptions] are not only in the melodies-sometimes the bass line is part of the transcription. Sometimes the drum track is even part of it.”

Sorting out the results was a task that fell to Mahanthappa’s working quartet, featuring Francois Moutin on bass, Elliot Humberto Kavee on drums and longtime musical partner (and fellow Indian-American) Vijay Iyer on piano. “It seems like things that are almost impossible are somehow playable,” says Mahanthappa. “Those guys have an openness that’s amazing; they’re willing to tackle anything.”

Iyer describes this openness as coming “from years of understanding and trust and collaboration.” He also remarks on contrasts between Mother Tongue and Mahanthappa’s previous album, Black Water (Red Giant), another meditation on the South Asian diaspora. “Because the [Mother Tongue] music was assembled according to a different logic that was initially non-musical, the path back to creating a musical statement was not obvious,” Iyer explains. “We all had to figure that out collectively.”

Many of the pieces have no prescribed harmony, making Iyer’s role particularly open-ended. “Sometimes Vijay’s part is written out, and sometimes he’s left to develop something that comes from the bass line or the melody,” Mahanthappa says. “Sometimes I’ll ask him to play permutations of a particular interval grouping, like any voicing with a root, a minor third and a whole step. Bartok played with a lot of those groupings, and the M-Base guys have fooled around with that stuff, where tonality is coming from an intervallic structure and not a particular note.”

Iyer has made challenges like these integral to his life’s work. “We’ve been gradually setting each other free harmonically,” he says of Mahanthappa, before drawing his own parallels to M-Base and what he calls “expanded post-tonal jazz harmony. You have to imagine that harmony is actually the result of something else, of melodies and dialogues. If you attune your ear you can hear harmony everywhere.”

The rhythm section, for its part, must be fastidious and flexible in equal measure. Moutin usually follows or reacts to a written bass line, and Kavee’s part might be specified down to the 16th note-or not at all. Mahanthappa has scored each piece with four staff systems, like a string quartet, but the group can leap off the paper, and back on, with great facility. The grooves themselves are metrically ambiguous; even this band’s 4/4 is not everyone else’s. Mahanthappa, the commanding presence at the helm, has a tone that is hard, biting and emotionally alive. He plays with blinding speed but also draws upon the ardent legato cries associated with Indian double-reed instruments or Hindustani vocalists.

A genial, positive 33-year-old, Mahant-happa was raised in Boulder, Colo., by parents originally from Bangalore. He recounts the experience of being the only Indian family in the neighborhood, and yes, being asked a certain uninformed question about language, not to mention others far less benign. (He jokes about calling his next album Do You Eat Chilled Monkey Brains for Dinner? )

In June 2004 Mahanthappa married his wife, Pooja, who was raised in North Carolina. “She grew up in more of an Indian community, where a lot of people spoke Gujarati. She can get by [in Gujarati] better than she thinks.” Mahanthappa speaks only English, and so included “English,” based on his own speech transcription, as the second track on Mother Tongue.

After doing undergraduate work at North Texas and Berklee, Mahanthappa earned a master’s from DePaul Univer-sity and spent time in the Chicago jazz trenches. He met Vijay Iyer in 1995 at the Stanford Jazz Workshop during a Steve Coleman residency, and soon joined Iyer-along with Kavee, Liberty Ellman, Aaron Stewart, Derrek Phillips and other like-minded Bay Area players-as part of a New York exodus in the late 1990s. In addition to leading his own group, he has appeared on Iyer’s Architextures, Panoptic Modes and Blood Sutra, continued a longstanding duo project with Iyer called Raw Materials, and participated in Iyer and Mike Ladd’s multimedia performance piece “In What Language?” He recently launched Dual Identity, a co-led project with fellow altoist Steve Lehman.

In May 2005, with support from the Rockefeller MAP fund, Mahanthappa will debut the Dakshina Ensemble, a collaboration with Kadri Gopalnath. “Kadri is a living legend of Carnatic [South Indian classical] music and also an innovator in adapting the saxophone to that music,” Mahanthappa explains. “He plays no jazz whatsoever, but he sat in with John Handy, among others.” Mahanthappa will travel to India in March 2005 to rehearse the new material. “Collaborating with Kadri has been a dream of mine since I first heard one his CDs at Berklee,” he says. “Only now am I prepared to take on such a challenge.”

Mahanthappa’s Indian influences aren’t always so direct and explicit, however. As he details the compositional processes employed on Mother Tongue, one begins to appreciate the breadth of his creative stimuli, not to mention the element of chance that informs his end results. “‘Telegu’ is actually a 13-bar blues with a bridge,” he says. It is also one of the few pieces with defined chord changes (and far from conventional blues changes at that). “With ‘KonKani’ I took some 20th-century approaches-I’m playing something really close to the transcription, a very angular, bizarre melody, and Vijay is playing the mirror image of that melody. ‘Tamil’ is almost like a free tune that refers to the melody here and there.”

There is an interesting backstory to “Kannada”: “My mom left me the message twice, so what you hear in the first melody is her saying it once, and the head out is her saying it the second time. ‘Malayalam’ was also fascinating because I managed to get two different people speaking that. I put the lines together: Elliot and I are playing one and Vijay and Francois are playing the other. One speaker was a male and the other was a female, and their statements lined up in some really freakish ways-phrases often ended in the same place, even on the same pitch. It almost alludes to some sort of metalanguage.”

According to the U.S. State Depart-ment, India has 18 official languages. Some claim there are hundreds in all (probably including dialects). For Mother Tongue Mahanthappa dealt with seven, whittled down from an initial list of 15. One senses that his work in this area is not done. It may take a while, but Mother Tongue, Vol. 2 could very well have its day. Originally Published December 1, 2004

At 95, Chicago-based guitarist George Freeman is among the world’s oldest active jazz musicians. Although he came of musical age in the 1940s and counts … END_OF_DOCUMENT_TOKEN_TO_BE_REPLACED

When you’re on TV, everybody knows you, or at least thinks they know you. Take Kevin Eubanks, who was on NBC’s Tonight Show five nights … END_OF_DOCUMENT_TOKEN_TO_BE_REPLACED

Jimmy Katz leads many lives. He is the preeminent currently active jazz photographer, and has shot more than 200 magazine covers and over 600 recording … END_OF_DOCUMENT_TOKEN_TO_BE_REPLACED