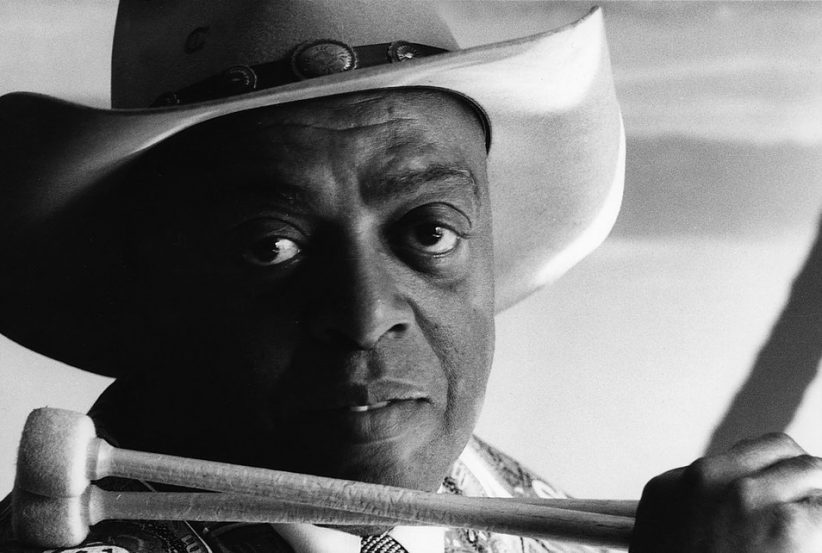 One of the most powerful natural resources of the jazz world is the kinetic drumming of Roy Haynes. To those veterans of the scene who would have us believe the adage ‘ain’t but a few of ’em left,’ Roy Haynes is certainly one of the classic survivors of bebop, even pre-bop for that matter. At age 71 looking at least 20 years younger and sounding like a young lion, Haynes is one of the wonders of the jazz wars, a true survivor who remains a commanding presence at the drums, whipping and driving a band like a team of untamed horses, eyes keen and piercing, face aglow with the joy of music making, athletically supple wrists and agile hands manipulating drumsticks as if they were his birthright. Still swinging after all these years, Haynes is in the midst of a minor renaissance on native soil, courtesy of his July-November tour of Lila Wallace-Readers Digest National Jazz Network sites that has taken him from Burlington, VT to Seattle, WA. We caught him chillin’ at his Long Island home, savoring the tour, his band and the richness of jazz itself.

Is this tour a bit of a throwback to bygone days? “To some extent, because when I first came to New York and I was playing with big bands we played places like North Carolina, Louisville, Houston, New Orleans, which are all on this tour. It is different and unique, especially for Roy Haynes to be doing a tour in the United States of America. I was kind of hesitant about doing it at first, but then somebody spoke to me about how much it would mean for even some of the newer, younger musicians who will be doing [Network tours] later, and I guess it is very important.”

Haynes’ band personnel has been fairly steady for the past few years, featuring Donald Harrison on alto sax, Dave Kikoski on piano, and Ed Howard at the bass, with Darrell Grant occasionally spelling Kikoski, Craig Handy filling in for Harrison. On rare occasion, Roy’s son, the far-sighted Graham Haynes, turns the group into a quintet. “By design I didn’t want to work steady and go out and continuously do clubs and concerts and one-nighters. I did that a lot when I had young children and was paying mortgage and all that stuff, but my wife is since deceased; my youngest is Graham Haynes, who is in his 30s, so I really don’t even have to do it now. I was saying a couple of years ago I was semi-retired, but a lot of little things happened and I started getting a lot of press in the last five years, more than I got earlier.”

Quizzed on what makes an ideal member of his band, Haynes has several key elements he’s looking for. “I look for feeling in what they’re doing. It’s not always what they’re doing, but it’s the way they’re doing what they’re doing. Sometimes I look for the way they listen to everyone else. There are a lot of things-things they didn’t do with somebody else’s band or their own band, they have to do a certain thing when they play with me, and I’m learning more about that. I didn’t just particularly plan it that way, it just happens and it’s my approach to the music.”

Kikoski and Howard in particular have been with Haynes for more than a minute. “Quite a few minutes. I’ve watched them, especially Dave, he’s grown, he has so much feeling, he can play anything. I just watch his feet sometimes, man he is in it, you know what I mean? He just gets down inside it. Darrell Grant too; I listen to some of his records and he’s got some great ideas. Ed has probably been with me longest. I take a lot of time off in between [gigs] because we would have never been together this long if I had worked week after week, I’m sure we’d get tired of each other. I know I’d get tired of them and they’d get tired of me too,” Haynes snickers. “But there’s a lot of space in between gigs and I design it that way to keep it fresh.”

Though Hayne’s band consists of musicians young enough to be his children, he may in fact be the youngest at heart on the bandstand. So come on Roy, why are you keeping the fountain of youth hidden from the rest of us, what’s your secret? “A lot of people say secret,” he chuckles. “I don’t know if it really is a secret. I guess I’ve been sort of lucky. I’ve done most of the things that most musicians that have been around as long as me-and not as long as me-have done. I watch what I eat, I’m not into eating a lot of meat and I haven’t eaten pork in maybe 20 years. I don’t know if that has anything to do with it, but it may. I’ve hung out,” he admits, “but now I don’t hang out too much because now when you get in your 70s you’re going to feel it the next day.”

OK, so that explains the long life, but how about the bottomless furnace that stokes that singular drum technique after all these years? Is it true that working in a band with Roy Haynes one had better step lively, or risk being steamrollered? “I’ve heard some artists that have played with me state that. Maybe its true, I don’t know. I know what I’m trying to do and sometimes, usually, I know the direction I’d like them to go and sometimes you can’t describe it. When you start describing what you want, if you have to do that with an artist that is playing with you, you’re not exactly wasting your time, but I prefer them to be able to hear what I’m trying to do, and then we all just go there while we play together. Any time a new player comes with me that I’m not familiar with, I listen to that player so much that when I hear a record being played on the radio and I hear that particular artist, I know who it is-right away, I say ‘that’s somebody that has played with me’-and that’s how much I listen to what they’re trying to do.

“I’ve heard it said that when different people play with me they play differently than they have ever played before. Lots of times they don’t tell me that themselves, they tell someone else and somebody else tells me. I was thinking of that the other day because once I filled in with Branford Marsalis just before he started on the Tonight Show. I played two nights with him in place of Jeff Watts. Later Branford told one of my sons ‘I never played like that before!’ He was flabbergasted. And I know that has happened with a lot of artists. Charlie Parker told Red Rodney ‘this little guy’s got all the moves.’ At his funeral, Chan said that Bird said I was his favorite drummer, and I know he loved Max Roach, but there was something different in what I was trying to do, so that has come all the way down to this period.”

In a career that has found him gracing the bandstand with many of the greats, including a holy trinity of Lester Young, Charlie Parker, and Sarah Vaughan-not to mention the precious moments he spent with John Coltrane-what has been Roy Haynes most singularly memorable moment on the stand? “When I had the group Roy Haynes Hip Ensemble, which was started in the late ’60s, we were once playing at the Jazz Vespers at St. Peters, and it was during the period when I had George Adams and Hannibal Peterson in the front line. We used to close with the “Negro National Anthem” as [“Lift Every Voice and Sing”] was called back in the early days; Lift every voice and sing, ’til earth and heaven ring…,” Haynes recited the familiar lyric, “and I would come out of this drum solo and go into that.” This particular jazz vespers service happened on the anniversary of the death of Billy Strayhorn. “Dr. Logan, who was my doctor for a while, was Duke Ellington’s doctor, and they had just gone to the Hudson River to throw flowers in the water because [Strayhorn] was cremated; he was one of the first Blacks I know to say ‘throw my ashes in the river,’ and it was the Hudson. They came by the church afterwards and the church was packed. I went into this drum solo, then “Lift Every Voice and Sing” and [Logan and Ellington] stood up and the whole congregation stood up, and that was one of the most exciting things of my career-to have Duke Ellington in the audience, standing!”

So, besides a fall studio date for Dreyfus (his third for the label), what could possibly be next for Roy Haynes? “It’s always next when I get on the bandstand,” he enthused, ” and just play my heart out, just play, play ’til I feel like I’m gonna drop, go home, have a drink, go to sleep and pray that I wake up,” he laughs heartily. “There’s a lot of things I have in mind that I want to do, but I just take it day by day.”

“I don’t listen to records, I listen to the radio: WBGO, and WKCR. On the road I may listen to the classics: Tatum, Bird, etc.” Originally Published November 1, 1997

When you’re on TV, everybody knows you, or at least thinks they know you. Take Kevin Eubanks, who was on NBC’s Tonight Show five nights … END_OF_DOCUMENT_TOKEN_TO_BE_REPLACED

Jimmy Katz leads many lives. He is the preeminent currently active jazz photographer, and has shot more than 200 magazine covers and over 600 recording … END_OF_DOCUMENT_TOKEN_TO_BE_REPLACED

Take a look at Blue Note Records’ release schedule for 2022 and it’s hard to miss the significant percentage of electronic-oriented music. In March, the … END_OF_DOCUMENT_TOKEN_TO_BE_REPLACED