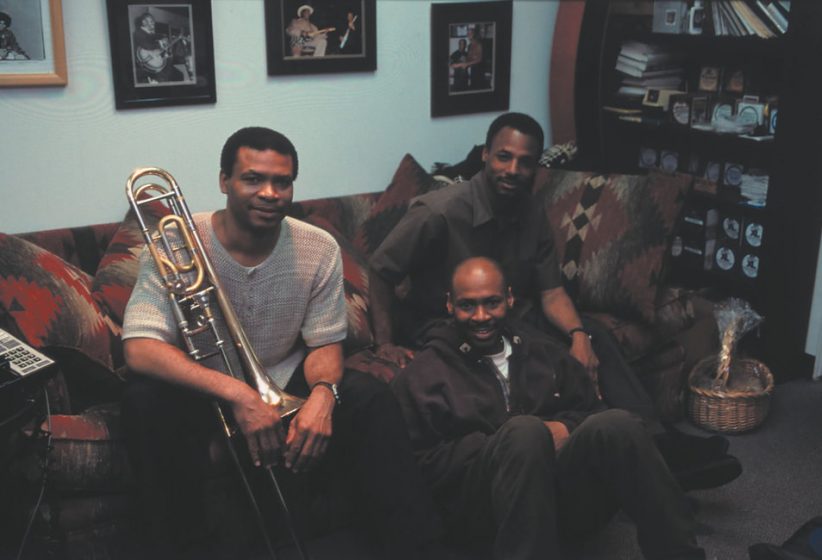 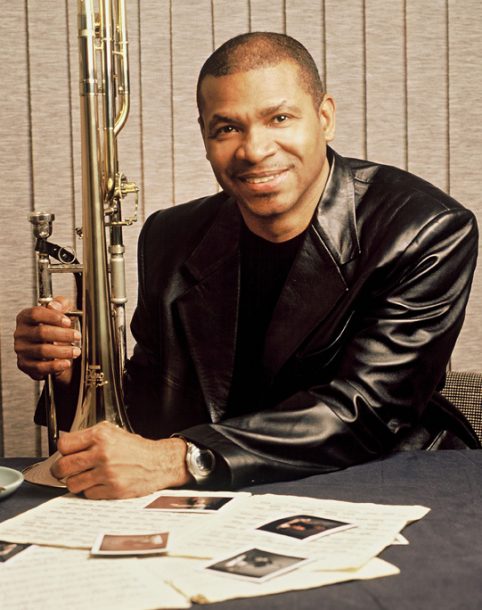 Robin Eubanks, photo courtesy of the Oberlin Conservatory of Music

When Robin Eubanks took the stage at Chris’ Jazz Cafe at the end of June, it was certainly a homecoming for the trombonist. He was back in his native Philadelphia, direct from a visit to his parents’ house just outside the city, and co-leading a one-off quintet with his younger brother, trumpeter Duane Eubanks.

Robin Eubanks’ new CD, Klassik Rock, Vol. 1, is a homecoming of a different kind, a return not to the place but to the sound of his youth. Electrifying his trombone, Eubanks reinterprets some of his favorite rock and funk tunes by the likes of Led Zeppelin, Jimi Hendrix and Sly and the Family Stone. “I started playing funk and rock and R&B back when I was coming up in high school,” Eubanks, 58, said prior to the Philly performance. “I grew up hearing all those horn bands back in the day. The reason I started getting into jazz was basically to learn how to play better solos in my funk bands.”

At the time, Eubanks recalled, every neighborhood in Philly had its own funk band that would play local bars, parties and proms. He belonged to two: Sundown and Pitch Black. “It was a wonderful time in my life, for sure,” he said. “Having girls scream at you when you’re 15 or 16 was kinda cool.”

While Klassik Rock, Vol. 1 may represent a return to Eubanks’ roots as far as his choice of material, sonically it showcases how far he’s come in the intervening decades. The distorted sound of his electric trombone, dueling with famous brother Kevin’s fretwork on Hendrix’s “Fire,” and the odd meters that he layers into his arrangements, as on the 9/4 funk of Sly Stone’s “Thank You (Falettinme Be Mice Elf Agin),” can be traced back to his work with the M-Base collective and Dave Holland. His own compositions are written with the same combination of soulful hooks and musical complexity-for example, the Brazilian rhythms of “Bahian Parade” or the elusive groove of “Shifting Centers.” As Eubanks explains, “Basically, what I was doing was arranging the classic rock songs to sound more like my original stuff, so my original stuff wouldn’t sound that far away from it.”

Eubanks began experimenting with effects on his horn as far back as the 1970s, influenced by fusion groups like the Mahavishnu Orchestra and Return to Forever. Using electronics, he said, offers “a whole other palette. It changes the sound of the horn so that it doesn’t even sound like a trombone, which makes me feel almost like I’m playing another instrument. It’s as if you could talk with the voice of your girlfriend; it would give you another voice and a different way to communicate and express yourself. It’s almost like an alias in a way.”

During the ’80s he was encouraged to experiment in his work with the M-Base crew, but the rise of the Young Lions meant that the business’ interest was focused on more straight-ahead sounds. “Traditional jazz was taking a stronger foothold in the recording industry,” he said. “I always included funk and electric and odd-meter stuff on almost all my recordings, but [often], because I was dealing with jazz radio and marketing and labels, I would throw something in there to appeal to straight-ahead acoustic jazz fans. On this one I didn’t do that.”

That’s not to suggest that the CD is inaccessible. The songs Eubanks chose to cover have been staples of classic rock radio for decades, and the CD supplements his Mental Images band with guest appearances by both of his brothers as well as Living Colour vocalist Corey Glover, who sings “Thank You” and Zeppelin’s “The Ocean.” Still, he was freed from worrying about record company concerns by crowdfunding the album through ArtistShare, which he calls “a paradigm for the future.” He’ll be taking the same route for his next project, a big-band recording that he plans to release in early 2015. He continues to work with the SFJAZZ Collective, whose repertoire has also recently been invaded by his electronics.

Eubanks selected songs for the album, he explained, based on his ability to transform them without losing their essence: “I wanted to take advantage of the fact that the songs were popular and then add a little twist here and there to give it my own flavor.”

Opening the album with “Thank You” provided a mission statement, he continued, pointing to the song’s phonetic subtitle, “Falettinme Be Mice Elf Agin.” As Eubanks said, “It’s analogous to the fact that this recording is letting me be myself. It made me feel like I’m bringing this stuff to the fore and reuniting with my musical roots.”

Preview, buy or download songs from the album kLassik rocK, Vol. 1 by Robin Eubanks on iTunes.

Guitarist Will Bernard bears the bittersweet blessing of virtuosic skill and eclectic taste, making his music a perpetual delight and yet hard to categorize. Maybe … END_OF_DOCUMENT_TOKEN_TO_BE_REPLACED

At 95, Chicago-based guitarist George Freeman is among the world’s oldest active jazz musicians. Although he came of musical age in the 1940s and counts … END_OF_DOCUMENT_TOKEN_TO_BE_REPLACED

When you’re on TV, everybody knows you, or at least thinks they know you. Take Kevin Eubanks, who was on NBC’s Tonight Show five nights … END_OF_DOCUMENT_TOKEN_TO_BE_REPLACED