Skip to content
Become a member and get exclusive access to articles, live sessions and more!
Start Your Free Trial
Home > Features > Roberto Magris: Eyes to the (Swinging) Future 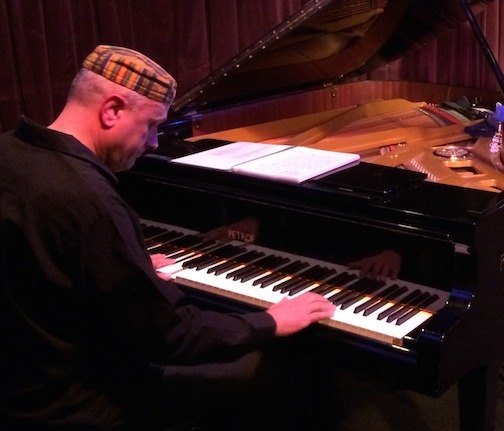 I have recently been digging the work of Italian jazz pianist/composer Roberto Magris, and my listening life is all the richer for it. Whether you love full-blooded, in-the-swinging-tradition piano; or exploratory, forward-searching compositions; or rhythmic, funky fun, Magris’ music is a rich discovery.

Born in Italy in 1959, Magris can play lyrical, swinging, bebop jazz with alto great Herb Geller (An Evening with Herb Geller & The Roberto Magris Trio, JMood Records). He can compose and play modern, impossibly catchy, funky jazz (Enigmatix, JMood Records). Or Magris can compose and play futuristic-yet-grounded-in-roots music (as he does on the two cd masterwork, Aliens In A Bebop Planet, JMood Records, which deals with how bebop might sound to an alien landing on Earth).

Don’t simply trust this writer. Listen to the esteemed Ira Gitler: “As a pianist, (Magris) reflects some of his most admired models-Wynton Kelly, Tommy Flanagan, Bill Evans, Kenny Drew, Jaki Byard, Randy Weston, McCoy Tyner, Andrew Hill, Paul Bley, Don Pullen and Steve Kuhn (a varied group indeed) in his own way. There is a quick, supple right hand and the rich harmonies of the two-handed transition in his playing that don’t necessarily summon up instant comparisons to any of the above or others.”

Says the gifted critic Brian Morton, “If there’s a figure in the carpet it’s a rhythmic sense that strongly recalls Monk, but an approach to harmony that covers the waterfront from McCoy Tyner to Andrew Hill. In terms of shaping a solo, Magris is anxious to point beyond Bud Powell to an echelon of less familiar players sometimes considered derivative of Bud but often equally distinct in language.”

Says Magris himself, “I think that jazz is still a creative music today and it will remain in the future if the musicians are able to operate in two directions: to find new ways forward, and back as well, so as to update the tradition in order to create and to keep a ‘dynamic jazz playground.’ So I don’t think that if a musician is mainly focused on avant-garde/new directions that, at the same time, he cannot also remain focused in the tradition. In my opinion, and in my own approach to jazz music, this should be complementary and not conflicting.”

As Magris told Morton in Jazz Journal, “I am an Italian of non-Italian culture, living in Trieste…middle-Europe…so I’m an expert in looking ahead to tradition.”

JMood Records, a unique independent label out of Kansas City, is owned by Paul Collins, and its musical director is…Roberto Magris! “Even if I am Italian,” says the pianist, “I’ve become a jazz citizen of Kansas City, where I come to play concerts and make new projects every year (as well as performing in different parts of the U.S.A.)”

Since the late ’70s, Magris has recorded 26 albums with his own groups, playing in 41 different countries in Europe, America, Asia, Africa and Australia. On the magical album, An Evening With Herb Geller & The Roberto Magris Trio, he is joined by Nikola Matosic on bass and Enzo Carpentieri on drums. To the ears of this Geller fan, the late alto giant’s playing is among his very finest captured on disc. On the infectious Enigmatix-which could fill the dance floor of any hip urban nightclub-Magris is accompanied by Dominique Sanders on bass; Brian Steever on drums; Palo Sanhueza on congas and percussions; and the gorgeous voice of Monique Danielle. Also highly recommended is Morgan Rewind: A Tribute to Lee Morgan Volumes I & II.

What does the future hold for Roberto Magris?

“At JMood Records we’ve already in our pocket two new CDs: Need To Bring Out Love, recorded in 2014 as the musical sequel and complement to Enigmatix, with a special focus on the theme of love; and World Gardens, that I’ve just finished recording last week in Kansas City. World Gardens includes different musical influences (African rhythms, European melodies, American jazz and blues, contemporary avant-garde). Both cds include my trio with Dominique Sanders and Brian Steever, plus percussionist Pablo Sanhueza and singers Monique Danielle and Julia Halie in several tracks. I’m very happy and proud to continue to expand my musical trips in the USA in different and sometimes new directions. Last but not least, I’m very grateful to JMood owner and producer Paul Collins for giving me such a great chance, including also live performances. My latest tour included concerts in Kansas City, Missouri; Kansas City, Kansas; Omaha, Nebraska; Des Moines, Iowa, Saint Louis, Missouri, and I’m looking forward to my nest concert in Miami, Florida at WDNA on February 6, 2016.”

In its near-century of excellence, The New Yorker has been home to more than its share of tops-in-their-field contributors. There’s E.B. White, with his luminous … END_OF_DOCUMENT_TOKEN_TO_BE_REPLACED

Put a “the” in front of a name and it acquires historical heft. The Thelonious Monk who entered New York City’s WOR Studios as Halloween … END_OF_DOCUMENT_TOKEN_TO_BE_REPLACED

On the enchanted evening of August 16, 1958, Ella Fitzgerald took to the stage of the legendary Hollywood Bowl. There, with a lustrous orchestra conducted … END_OF_DOCUMENT_TOKEN_TO_BE_REPLACED

Be careful what you wish for.  By the beginning of 2020 guitarist Mary Halvorson, one of the most acclaimed musicians of her generation, was also … END_OF_DOCUMENT_TOKEN_TO_BE_REPLACED