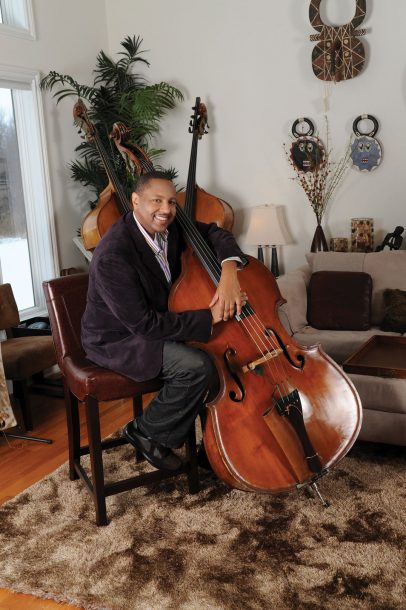 Bassist Robert Hurst is onstage at Manhattan’s Jazz Standard in January, laying it down alongside drummer Jeff “Tain” Watts-a rhythm partner since the mid-1980s, when the pair began playing together in Wynton Marsalis’ working quartet. The tune is “Jonesin’,” Tain’s earthy ode to drummer Elvin Jones, and Hurst’s full-bodied walking basslines are strictly old-school-the kind you feel in your gut. In combination with Watts’ irrepressibly swinging presence on the kit, they forge an indelibly tight groove. Last year Hurst released two excellent recordings through his own Bebob label, and the hookup between the bassist and Watts brings to mind the title of one of them: Bob Ya Head.

The following afternoon, Hurst is holding court in his New York hotel room. On the dresser, an open laptop reveals a screensaver image of his bass hero Ray Brown, photographed playing his upright with a wide grin and big stogie jutting out from one side of his mouth. “I love that picture,” says Hurst enthusiastically. “Ray’s one of those people who covered the whole spectrum. He came up in the swing era, he was there at the very beginning of bebop, and he continued all the way through everything. I feel really blessed to have gotten a chance to hear him play live. I mean, that probably was the greatest bass sound ever. And I believe there’s a difference in the tone of bass players who heard Ray Brown play live, just like there’s a difference in the tone and attack of drummers who heard Art Blakey live. Hearing what a good sound is in person and actually seeing how somebody does it … that kind of information sticks with you forever.”

Aside from just witnessing greatness in action, the Detroit native also absorbed wisdom firsthand from elders like Brown and Ron Carter early on in the New York phase of his career. His one lesson with Brown took place shortly after Hurst had joined Wynton’s band. “Ray was playing at the Blue Note and I went to hear him,” he recalls. “I finally got my courage up to introduce myself and asked him if we could get together. He said, ‘Yeah, come by the club early tomorrow.’ I showed up with my bass the next day and he gave me an amazing lesson. It was very to the point and immediately addressed all the things I needed to do. It was about the importance of playing time and being responsible, really taking it upon yourself to make sure that it was swinging.

“That definitely had a huge influence on how I approach playing the bass, in terms of being out front and aggressive about it,” Hurst continues. “He’d say, ‘We’re the softest instrument on the stage, so we have to play! You can’t lay back and do this; you have to be aggressive and on top of the drums so people can hear you.’ Anticipating the beat and playing slightly ahead of it is something I got from Ray. He and Ron Carter both have great sounds, but I think you can hear them with such clarity because of the way they play the time. It’s in the way they’re aggressive about it and so on top of the beat.”

Another eye-opening lesson, with Carter, also happened not long after Hurst’s arrival in NYC. “He talked about finding out exactly where your plucking hand is positioned when you sound your best,” Hurst remembers. “He put a piece of Velcro to mark the sweet spot on my bass, and he said, ‘That’s your sound right there, so go with that.’ He made me observe myself at my best and then always go for that. And when I started doing it exactly the same every time-Ron was very much a stickler for that-I started to hear my true sound and get focused on it. From then on, I started hearing more consistency in my sound.”

Those lessons can be readily heard in Hurst’s work with Wynton’s band, on key recordings like 1986’s J Mood and 1987’s Live at Blues Alley, and subsequently with Branford Marsalis’ group, on 1990’s Crazy People Music, 1991’s The Beautyful Ones Are Not Yet Born and 1992’s I Heard You Twice the First Time.

Says Watts of his longtime bass-playing colleague, “Bob’s a great musician who brings so much to the table. He’s definitely got the tradition covered, and he’s also got his own spin on it. Plus, he’s a really viable soloist who is transcending the bass, doing what horn players and piano players do and then having his own rhythmic ideas on top of that.”

One of Hurst’s younger collaborators, pianist Robert Glasper, concurs. “He’s one of them cats, man … you look forward to his bass solo,” he explains. “A lot of people have that joke, ‘Oh, bass solo … time to go to the bathroom.’ But with Bob, it’s always very interesting. He’s so rhythmic and his ideas are so crisp and he has so much facility, you forget you’re listening to a bass sometimes. It’s like he sounds like a horn player who has a pedal that makes the horn sound like a bass-you know what I mean? That’s what I love about him.”

“The logic behind his basslines is really hip and sophisticated,” adds Branford Marsalis. “But at the same time, he has a lot of musical intelligence too, which is different than harmonic intelligence. When we were gigging, we were out there bashing and he always brought a vibe to it. We didn’t have to change the conditions of how we played when Bob came into the band because his sound had such a big attack to it, and he played with attitude.”

The rest of this article appears in the April 2011 issue of JazzTimes.

At 95, Chicago-based guitarist George Freeman is among the world’s oldest active jazz musicians. Although he came of musical age in the 1940s and counts … END_OF_DOCUMENT_TOKEN_TO_BE_REPLACED

When you’re on TV, everybody knows you, or at least thinks they know you. Take Kevin Eubanks, who was on NBC’s Tonight Show five nights … END_OF_DOCUMENT_TOKEN_TO_BE_REPLACED

Jimmy Katz leads many lives. He is the preeminent currently active jazz photographer, and has shot more than 200 magazine covers and over 600 recording … END_OF_DOCUMENT_TOKEN_TO_BE_REPLACED