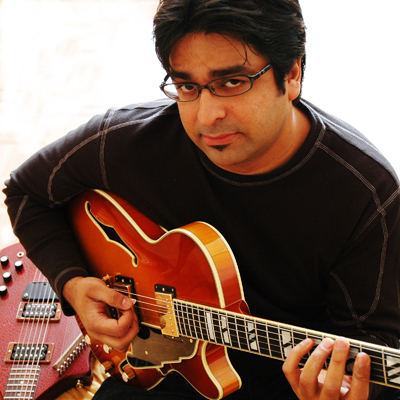 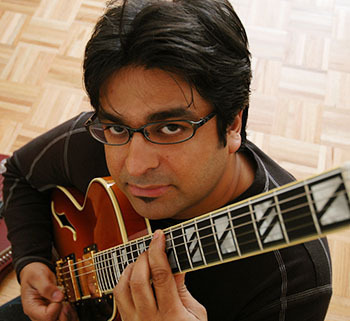 It’s February in New York, and Rez Abbasi has just returned from a quick West Coast tour. “And believe me, I wish I was there right now,” he says, laughing. “Today the high here was 20 degrees, with a low of 5 degrees. We got back from California, and it’s such a different feeling.”

Abbasi, a guitarist and composer, is more comfortable out west than most. He grew up in Los Angeles, having moved there with his family from Karachi, Pakistan, at the age of 4. The Pakistani musical traditions, as well as those of neighboring India, have long infiltrated the music of his trio and, especially, his Invocation quintet, which features pianist Vijay Iyer and saxophonist Rudresh Mahanthappa-both explorers of a similar jazz/South Asian hybrid.

But Intents and Purposes (Enja), Abbasi’s newest release, suggests a change in atmosphere not unlike his shift from sunny California to wintry New York. It’s an album of covers from the heyday of jazz-rock fusion-Weather Report’s “Black Market,” Billy Cobham’s “Red Baron,” Tony Williams’ “There Comes a Time,” plus five more-as performed by the Rez Abbasi Acoustic Quartet (RAAQ): Abbasi on steel-string acoustic, Bill Ware on vibes, Stephan Crump on bass and Eric McPherson on drums. In contrast to the sharp harmonic angles and distorted, often barbed guitar tone of his other projects, Intents and Purposes is a much cooler affair, with fairly straightforward harmonies and no production effects. It’s also the first of his 10 recordings not to include any original compositions.

“The genesis of this particular record came when I realized that I really have a hole in my jazz-historic education, so to speak,” he says. “It just dawned on me that I wanted to revisit some of this material, and at the same time I was thinking that I really wanted to do another record with RAAQ.” (The quartet’s first album, Natural Selection, came out in 2010.) “I decided that it would be a good opportunity to choose a handful of tunes that I am not really that familiar with, and de-electrify them and recast them in an acoustic nature.”

That Abbasi wasn’t fluent in fusion is surprising. Born in 1965 and playing since he was about 10, he came of age musically when bands like Return to Forever and Weather Report were still packing amphitheaters. But as a kid he was more interested in hearing and playing rock on his own time, while in his parents’ home he was more likely to hear the music of South Asia. (His father was an amateur singer who performed at weddings in the local Pakistani community.) By 16, Abbasi had decided he was serious enough about music to want to pursue it in college; one didn’t major in rock and roll, though. A friend who was also searching for a viable musical study introduced him to jazz.

“I was much more into tradition,” he says, recalling a teacher who had him transcribing solos by Miles Davis and Pat Martino. Following that, he discovered Jim Hall. When he heard fusion, “I was immediately turned off, because it was so similar to what I had just left playing in the garage band. It was very electric, very powerful, and it had this rock influence that I was trying to get away from.”

Abbasi already had rough ideas for another kind of fusion, between jazz and Indian-Pakistani music. After earning his degree at Manhattan School of Music in 1990, Abbasi traveled to India and studied rhythm with master percussionist Alla Rakha. But it wasn’t until his fourth album, 2003’s Snake Charmer, that this direction finally clarified for the guitarist. Not long afterward, he crossed paths with Iyer and Mahanthappa, and was impressed with their similar conception. The latter would eventually hire Abbasi, first for his Kinsmen project, then for his Indo-Pak Coalition, which also featured drummer Dan Weiss on tabla. Weiss would join Iyer and Mahanthappa in Abbasi’s Invocation, along with bassist Johannes Weidenmueller. Abbasi is currently writing a new album for the quintet, with assistance from a Chamber Music America grant.

Invocation and RAAQ form half of Abbasi’s current slate of projects. His trio, featuring bassist John Hébert and drummer Satoshi Takeishi, is the closest he comes to straight-ahead jazz. He also has a brand new quartet called Junction, which represents yet another kind of fusion. “It’s quite the opposite of RAAQ. It’s an all-original project, and it’s all electric,” he explains. “So there’s me on electric guitar, Mark Shim on tenor saxophone and a MIDI wind controller, an electric-saxophone-type thing. Ben Stivers is on keyboard and organ, which is all electric, and Jaimeo Brown is on drums. Their album is completely written, and all we have to do is rehearse and record it.”

Put a “the” in front of a name and it acquires historical heft. The Thelonious Monk who entered New York City’s WOR Studios as Halloween … END_OF_DOCUMENT_TOKEN_TO_BE_REPLACED

On the enchanted evening of August 16, 1958, Ella Fitzgerald took to the stage of the legendary Hollywood Bowl. There, with a lustrous orchestra conducted … END_OF_DOCUMENT_TOKEN_TO_BE_REPLACED

Be careful what you wish for.  By the beginning of 2020 guitarist Mary Halvorson, one of the most acclaimed musicians of her generation, was also … END_OF_DOCUMENT_TOKEN_TO_BE_REPLACED

Guitarist Will Bernard bears the bittersweet blessing of virtuosic skill and eclectic taste, making his music a perpetual delight and yet hard to categorize. Maybe … END_OF_DOCUMENT_TOKEN_TO_BE_REPLACED