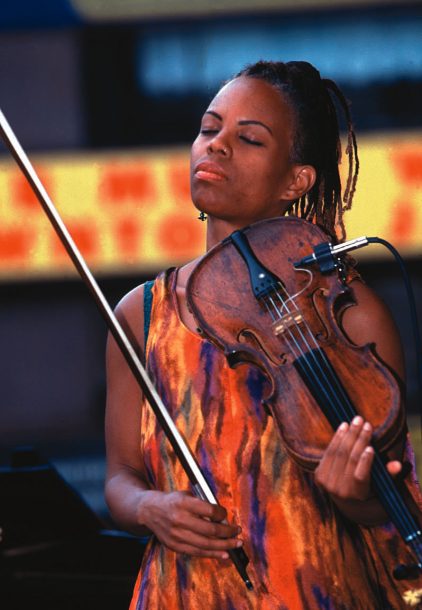 From the mid-1980s, when she was spotted in the string section of saxophonist Donald Walden’s Detroit Jazz Orchestra, and in solo roles around her native Motor City with artists like guitarist Spencer Barefield, to her days as star soloist with the band Straight Ahead, to a stint with the String Trio of New York, to her electrifying cameo appearance in Wynton Marsalis’ Blood on the Fields tour, and more recent sightings in Steve Turre’s sextet, it’s been clear that Regina Carter is an exceptional and refreshing talent. And now on the strength of the broad rhythmic boundaries and marvelous playing on her Verve Records debut, Rhythms of the Heart, the proof is in the pudding that with the passing of Stephane Grappelli, the jazz violin torch has been passed to this remarkable spirit from Detroit.

Broad boundaries and wide vistas are common themes of Regina Carter’s journey. As she spoke from her Manhattan digs, our conversation veered to her recent collaboration with the award-winning playwright Anna Deavere Smith. “She’s working on a play called House Arrest.” Ms. Deavere Smith is a masterful improviser and her works are in constant evolution, much like jazz. “It deals with certain presidents and their scandals and how the press dealt with them: Jefferson, FDR, Lincoln, Clinton…. And she deals a little bit with Princess Di and how the press exploited her and how the public reacted.

“Anna usually does one-woman plays where she listens to tapes so much she is transformed and becomes [her characters]. This is her first time working with other actors and she is teaching that technique to them. Sometimes more than one person will play a certain character. I’m playing Jefferson in the beginning of the play, and I don’t have to speak, but Jefferson played the violin, so I’m his violin side and I’m doing music of his day. I did some research and started writing bits of music that sound like music of that time, and after that I’m just creating a mood or going against a mood that’s already set, so I’m not a character anymore,” she continued. “Some of these pieces I wrote have harmony parts and I just laid down the harmonies on DAT. Some of the scenes may be something taking place at the White House where they would have strolling violins, so I did like a music-minus-one, I put the harmonies down and then I’ll play live with the DAT.”

Deavere’s piece came on the heels of Regina putting the final touches on Rhythms of the Heart, which she also co-produced. “It was funny,” she chuckled, “because I hadn’t had a record out in a while. But it was interesting that whole time when I didn’t have any records out I was starting to get a lot of press and I was given that opportunity to play Sweet Basil leading my own group; I used Kenny Barron, Lewis Nash, Peter Washington, and Rodney Jones [each of whom contributed to the record]. Then I started to think about what kind of music I like because I had been doing the, if you will, smooth jazz thing. Some of those tunes I was actually still doing with the acoustic band. I went through a lot of tunes that I really liked and that worked well on the violin and that would convey some kind of message. “Papa Was a Rolling Stone” [sung by Cassandra Wilson on the record] came about because one day that melody just popped into my head and people responded to it in such a positive way.”

Listening to the record one experiences a gumbo of rhythms and stylistic approaches, on tunes ranging from “Our Delight,” and “Spring Can Really Hang You Up the Most,” to the African rhythms of “Mandingo Street” and the R&B of “Papa Was a Rolling Stone,” very much reflective of where she’s been musically. “A big part of it was growing up in Detroit,” she agrees, “just having all of those pockets of culture there: we have a Latin community, of course Motown, and then the whole jazz community there. In a way the whole record is kind of what I grew up with, journeys I’ve taken, and the music that has influenced me.

“A lot of times record companies want you to have a concept,” she continued, “and I’m not a straightahead player. There’s not one kind of music that I can say OK, this is the kind of musician that I am. I grew up heavily steeped in European classical music. Richard [Seidel, co-producer] said ‘Why don’t you do something that represents different rhythms?’ I just said I’m gonna find musicians whose music I really enjoy playing and ask them to contribute to this project. I asked Richard Bona to write [“Mandingo Street”] and he played all the instruments on it and sang. That was one of the toughest tunes to record because of the feel of it and the count, because where he’s from [Cameroon], they don’t count, they just feel it. At first I was really disappointed because it took me so long, and he said ‘You shouldn’t be disappointed, you should be happy that you can still be challenged,’ which I thought was a really hip way of looking at it.”

Rhythms of the Heart is an acoustic jazz album at its core, employing various ethnic colors, rhythms, and adjuncts, but a jazz album nonetheless. One of the more straightahead selections proved particularly tricky for the resourceful Regina: “I would say ‘New York attitude,’ because trying to take a solo after Kenny Barron, it’s like…. why?” she laughs. “That was difficult because I was really up tight doing the solo and thinking about what I was playing and it stopped me from being as creative as I could have been. I said don’t let me have to hang the rhythm section up just because of my solo. Kenny Barron said something I’d never even thought of before, he said ‘You are where you are [in terms of] level of playing; you can’t judge yourself and say “I don’t sound like so and so now, or I should sound like this.’ ” You are where you are and you’re documenting your music now, a year from now you’ll be further from now, and that’s the beauty of the music.'”

Acoustic jazz has not always been the atmosphere where you’d find Carter, particularly with her own band and on her Atlantic records. Asked about the transition from those days, which she referred to as in the smooth jazz vein, though the music actually fell somewhere in between smooth jazz and bonafide jazz, she replied, “When I did the Blood on the Fields tour with Wynton, then when I did the Travelin’ Miles tour with Cassandra Wilson, working more in an acoustic situation, I enjoyed just being able to play the instrument natural and not have any kind of hook-up. All of a sudden because I was with these folks and it wasn’t plugged in and it was acoustic, I got all this attention! I’m not opposed to that, because I’ve done one acoustic tune on each of the Atlantic records. With an acoustic band it’s fun to explore that feel and how to deal with those tunes with an acoustic group.”

Increasingly, her immersion in acoustic music has stirred new levels of interest in her as a bandleader. “But I don’t want to give up working in other people’s units,” she declares, “like Steve Turre or Kenny Barron, because I learn so much from that and I don’t feel like musically I’m at a point where I can say ‘Okay, I’m done learning’ and I can just be the bandleader and I can turn around and mentor someone. I’m pretty young in this music so I still feel like I need that and I don’t wanna give that up anytime soon because it just keeps your music fresh. I look at some of the guys in my band that may be even newer to the scene than I am; we can all go back and play with other folks that have been out there and bring that experience back to the band.”

Asked about future directions, Carter focused more on increasing her skill level in the music and her instrumental acumen. “I’ve had a lot of people I really admire, like Kenny Barron and John Blake say to me ‘You’re gettin’ to where other people want to go, your process is just opposite.’ They told me that I should be happy because a lot of people learn things theoretically and then they try and learn how to use their ear, whereas I come from a totally opposite point of view. You can explain something to me theoretically and it means nothing to me, I just have to hear it and understand it that way, so it’s more of an intuitive way that I approach the music, and I’ve started to accept that it’s okay however people get there as long as you get there. I did a gig with Kenny Barron and Rufus Reid and Victor Lewis about a year and a half ago and we were doing “Passion Flower,” a beautiful tune with monster changes. So I’m out here playing and I’m looking at Kenny and Rufus saying, ‘Okay, help me, throw the life raft out here any day now’ [Laughs]. I remember they gave me this really pleasant look like ‘we know you’re struggling, but you’re gonna get back on your own and we’re gonna let you get back on your own.’ In one way I beat myself up more, but when people like that still continue to call me…I think it’s probably enjoyable for them–to watch me really struggle but get to where I’m trying to get each time.”

Regina plays an old German trade violin of indeterminate age, with a Wurzberg bow and an L.R. Baggs pickup.

The Gentle Side of John Coltrane (Impulse!)

At 95, Chicago-based guitarist George Freeman is among the world’s oldest active jazz musicians. Although he came of musical age in the 1940s and counts … END_OF_DOCUMENT_TOKEN_TO_BE_REPLACED

When you’re on TV, everybody knows you, or at least thinks they know you. Take Kevin Eubanks, who was on NBC’s Tonight Show five nights … END_OF_DOCUMENT_TOKEN_TO_BE_REPLACED

Jimmy Katz leads many lives. He is the preeminent currently active jazz photographer, and has shot more than 200 magazine covers and over 600 recording … END_OF_DOCUMENT_TOKEN_TO_BE_REPLACED