Skip to content
Become a member and get exclusive access to articles, live sessions and more!
Start Your Free Trial
Home > Features > Reggie Quinerly: Talk of the Town 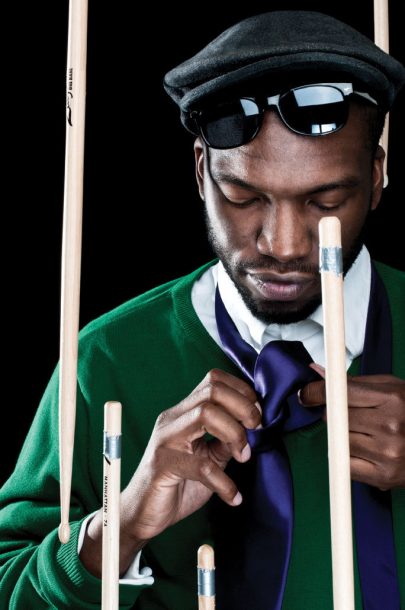 When drummer Reggie Quinerly heard the call of Houston’s Fourth Ward, once known as Freedmantown for its fledgling population of newly emancipated slaves, he wasn’t sure where it came from, but ideas began flowing before he even realized he’d gone to middle school there. What eventually became Quinerly’s debut as a leader, Music Inspired by Freedmantown (Redefinition), captures the sounds and textures that emanated from the streets, between hope for the future, exuberance, stern solemnity and deep conviction to build new lives. Quinerly, 31, views it as an accidental concept album, bubbling up from the collective unconscious.

“When I wrote this melody, it automatically made me think of a different time and a different place. It made me think of home,” Quinerly says of the record’s lead-off cut, “Freedmantown.” He saw the music as a way to access his heritage, and conducted copious research. “It was an opportunity to learn more about Freedmantown. Culturally and spiritually, it’s a part of who I am as a musician.”

The album is as inspired by Jelly Roll Morton and the New Orleans second-line tradition as it is by gospel and spirituals, and features a stable of first-rate collaborators, including tenor saxophonist Tim Warfield, pianist Gerald Clayton, guitarist Mike Moreno and bassist Vicente Archer. (Quinerly’s previous sideman credits are similarly impressive. He’s worked with Von Freeman, Vincent Herring, Joe Lovano and numerous others.)

Highlights of Freedmantown include “Victoria,” a plangent ode to Quinerly’s sister, arranged for Clayton and vocalist Sarah Elizabeth Charles. “Fenster” is a downhome tribute to the convivial spirit that pervaded Freedmantown, a blues that allows the band to stretch out, culminating in Quinerly taking a restrained drum solo reminiscent of Max Roach. The leader delivers a spoken history lesson on “Freedmantown Interlude,” and the standard “Sentimental Journey,” the closing track, has a breeziness tempered by an airtight rhythm section, punctuated by Tim Warfield ripping up and down the horn.

Prior to doing his undergraduate work at the Mannes School of Music at New School University and earning his master’s at Juilliard, Quinerly attended Houston’s High School of the Performing and Visual Arts, the alma mater of Moreno, Jason Moran, Robert Glasper and Eric Harland. Quinerly’s Houston roots run deep. Every December for the past nine years, he has organized “Redefinition: An Artistic Experience,” a multimedia show in Houston that brings together the community of musicians, artists, dancers and poets, all home for the holidays.

Although Quinerly’s influences are numerous and diverse-he puts Mary Lou Williams, Jimmy Cobb and Ahmad Jamal alongside contemporary jazz musicians, soul artists and underground hip-hop groups-his Texas years informed his work most deeply. Houston-based percussionist Sam Dinkins, for example, imparted an important lesson early on. “Sam taught me the difference between playing the drums and just bashing,” Quinerly says. “If there’s anything that’s kind of like my mission in music, it’s to let people know that drums are not to be bashed. I don’t bash the drums.”

Church is another integral part of Quinerly’s Texas musical heritage, an influence he brought with him to his current home in New Jersey, playing every Sunday morning at Calvary Baptist Church in Paterson. (No stranger to sleep deprivation, he also plays a weekly late-night session at Smoke with vocalist Cynthia Soriano on Saturday.) Musical Director Enoch Smith Jr. penned the words and did the arrangement for the jubilant, R&B-laced “Freedmantown.” “The soul of this place is written on every citizen’s face,” a lyric goes.

“For many musicians that have come up playing in church, it’s hard to separate music and spirituality. They kind of converge in this weekly experience,” Quinerly says. “Even going back to Freedmantown and before, that experience has connected so many people.”

This visceral connection extends to his abode, a converted silk mill in Paterson that is now an artist’s loft. Vibraphonist Steve Nelson is his neighbor, in addition to saxophonist Jaleel Shaw and drummer Johnathan Blake. “It’s the human element. It’s unity,” Quinerly explains. “At the end of the day, it’s all people coming together and that’s what I really wanted. I didn’t want anybody to feel alienated or feel bad about anything. History is what it is, but how can we bring out the best in each other? That’s what I wanted to do with the music.”

OK, that’s funny, but it also implies a problem. People who dismiss the accordion as soon as they hear it, as soon as it triggers … END_OF_DOCUMENT_TOKEN_TO_BE_REPLACED