Skip to content
Become a member and get exclusive access to articles, live sessions and more!
Start Your Free Trial
Home > Features > Rebecca Kilgore: Portrait of a Song Obsessive 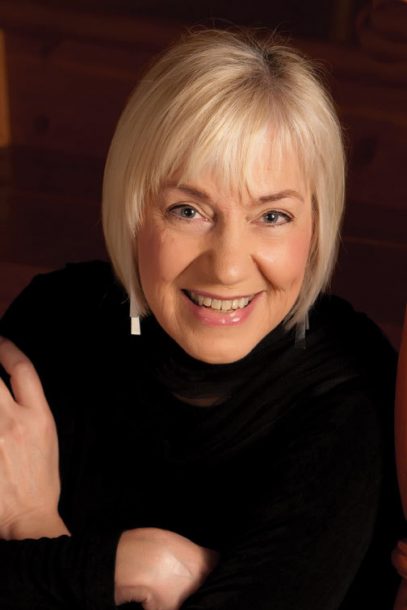 Portland is renowned for a lot of things: curbside gourmet delicacies, concerted environmental concern, spectacular roses, great microbreweries. But it is only recently, since the advent of the superbly programmed Portland Jazz Festival in 2004, that the hipster mecca north of San Francisco has earned a wider reputation as a jazz hub. Actually, Portland’s jazz roots are quite deep, and among the strongest of those roots is vocalist and (occasional) guitarist Rebecca Kilgore.

Confer with her collaborators and the compliments quickly begin flowing. “Becky is my favorite singer to play for,” says pianist Dave Frishberg, who first partnered with Kilgore on 1994’s Looking at You and has since become her most frequent musical confidant. “She is technically a marvelous singer,” he continues, “[and] always in shape. Her voice sounds great, and her delivery is flawless.” John Pizzarelli, a longtime fan and recent recording mate on several albums, including the new Lovefest at the PIZZArelli Party (Arbors), adds, “She just sings perfectly. She’s a dream of a studio singer. You just feel great when you’re in the room with her. You’re happy to be there, and you know it’s going to work.”

High praise, particularly for a performer so inherently shy she waited until age 30 before making her professional debut. Raised in the Boston suburb of Waltham, Kilgore’s first love was folk music. “When I was in high school,” she says, “I was into Joan Baez and Judy Collins and people like that. I got a guitar and strummed along. Then I discovered a disc jockey in the area who played classic jazz. I got acquainted with Billie Holiday and Ella Fitzgerald and Anita O’Day and just flipped. Those singers took me on a complete musical detour. They were my teachers, because I never had any formal training. I consider myself so fortunate to be a torchbearer for that style of singing.”

Toward the end of the 1970s, Kilgore relocated to Portland. Alone in a new town and eager to make friends, she regularly attended local music gigs. One night she caught a jazz act called Wholly Cats. “There was a gal in the group playing rhythm guitar and singing,” she recalls, “and that’s what I did in the privacy of my own home. We became fast friends, and when she decided to quit the group, she suggested I try out. I was aghast. I didn’t think I could sing professionally, but the idea got stuck in my head, and I got the job. It was a major turning point in my life. I loved being with musicians, loved learning new music all the time, and it was like a whole new family for me. There was no turning back after that.”

Another major turning point came in 1991, when Frishberg, having settled in Portland, began a two-night-per-week gig at the Heathman Hotel. He performed with the late cornet player Jim Goodwin for the first couple of months, and after Goodwin departed, the hotel said they’d prefer a singer in the band. Frishberg reached out to Kilgore, who at the time was holding down a secretarial day job at Reed College. When she got the call from Frishberg, she decided it was finally time to devote her full attention to music. “It was like jumping off a cliff,” she laughs, “but it worked out. I think of my life as ‘before Dave’ and ‘after Dave.’ I am so grateful for everything I have learned from him. He is such a high quality musician and is very inspiring.”

During their five-year run at the Heathman, Kilgore got the chance to dig deep into the Great American Songbook. “Her repertoire is enormous,” says Frishberg. “The entire time we played the Heathman, she kept a log of all the songs we performed. After our final show, she handed me a printout of the entire log. We’d performed over 500 songs, and many of them we only did once. Every time I’d come to the gig, I knew she’d have something new. It was very stimulating.”

“I never like to do the tried and true,” says Kilgore. “My passion is discovering songs. When I uncover a song it is like falling in love, and I want to impart to the audience the fun and the beauty of finding it.” Nearly as ardent a musical archivist as Michael Feinstein, a professed Kilgore fan, she comes across vintage tunes in a variety of ways. “Some people send me CDs and say, ‘Here are some songs you might like.’ There was a gentleman from Savannah who was a Johnny Mercer expert, and he sent me an entire disc of Mercer obscurities. I’d never heard of any of them, and I know a lot of Mercer songs! And sometimes when I’m in a shopping mall, I’ll be listening to the Muzak and a song will pop up that I’d forgotten all about. The music just comes into my life. I seem to be a magnet for good songs.”

Nor is Kilgore opposed to newer material. “I don’t go out of my way to avoid contemporary songs,” she says. “I believe we’re in the middle of a resurgence of good songwriting, so I’m always on the lookout. My fishing lines aren’t always in the contemporary world, but I’m trying!”

As for her guitar work, though both Frishberg and Pizzarelli praise her playing, Kilgore considers herself “a pretty basic guitarist. I look at my guitar as a tool. That’s how I study music and learn songs. In my Western swing days, I used to play rhythm guitar, but these days I sing with such wonderful pianists that my guitar playing would be pretty gratuitous.”

In addition to Frishberg, Kilgore has forged long-term relationships with several artists, including guitarist/banjoist/vocalist Eddie Erickson, pianist Keith Ingham, saxophonist Harry Allen and the man she calls her “musical soulmate,” trombonist Dan Barrett. “Lester Young to Billie Holiday, that’s how I consider Dan and me,” she says. “He and I think alike, we hear the same lines and we love the same recordings, though what I know about old jazz is the tip of the iceberg compared to what he knows. He is a walking encyclopedia.”

It was Barrett, via Frishberg, who first introduced Kilgore to Arbors Records co-founder Mat Domber. “Dave tells the story,” says Kilgore, “that he and Dan were on tour. While traveling in the car together, Dave said, ‘I have this cassette of this singer,’ and Dan rolled his eyes and said, ‘Oh, no, not another vocalist!'”

Kilgore’s association with Arbors has continued apace since 1994, when she recorded I Saw Stars with a band featuring Frishberg and Bucky Pizzarelli. (Barrett wrote most of the arrangements.) “Rebecca is an outstanding talent,” says Domber. “And she is a very easy person to work with. She always comes prepared and knows her business. She has almost perfect pitch and a great sense of a lyric. In my opinion, she’s the best jazz singer around today.”

Also the most prolific. Since 1982, Kilgore has appeared, as leader or featured vocalist, on no fewer than 49 albums spanning 16 labels. “Sometimes I worry,” she confesses, “that the world is going to say, ‘Oh, another Kilgore CD, who cares?'” Still, in addition to Lovefest, she planned two more releases for 2011, both for Arbors. Available now is Live at Feinstein’s at Loews Regency, a document of a program she performed last summer with the Harry Allen Quartet, “Lady Day and Prez: A Musical Tribute to Billie Holiday and Lester Young.” The show allowed Kilgore to further explore the Holiday-Young symbiosis, but in the company of Allen rather than Barrett. As New York Times reviewer Stephen Holden raved, “The show’s avoidance of slavish imitation made for the best kind of tribute: one that captured the streamlined ease of performances in which Holiday and Young carried on a spontaneous, private conversation.” And come fall there will be The Sound of Music, a continuation of the Broadway series that she, Allen and Erickson launched a few years ago with South Pacific and Guys and Dolls.

At 61, she has no intention to slow down. “The problem,” she gleefully insists, “is that there are so many great songs. My desk is an absolute mess because of a huge stack of sheet music. I’ll take one off the top and incorporate it into my repertoire and then add five more to the pile. My tombstone is going to read, ‘I can’t go yet-I haven’t learned all the songs!'”

When you’re on TV, everybody knows you, or at least thinks they know you. Take Kevin Eubanks, who was on NBC’s Tonight Show five nights … END_OF_DOCUMENT_TOKEN_TO_BE_REPLACED

Jimmy Katz leads many lives. He is the preeminent currently active jazz photographer, and has shot more than 200 magazine covers and over 600 recording … END_OF_DOCUMENT_TOKEN_TO_BE_REPLACED

Take a look at Blue Note Records’ release schedule for 2022 and it’s hard to miss the significant percentage of electronic-oriented music. In March, the … END_OF_DOCUMENT_TOKEN_TO_BE_REPLACED