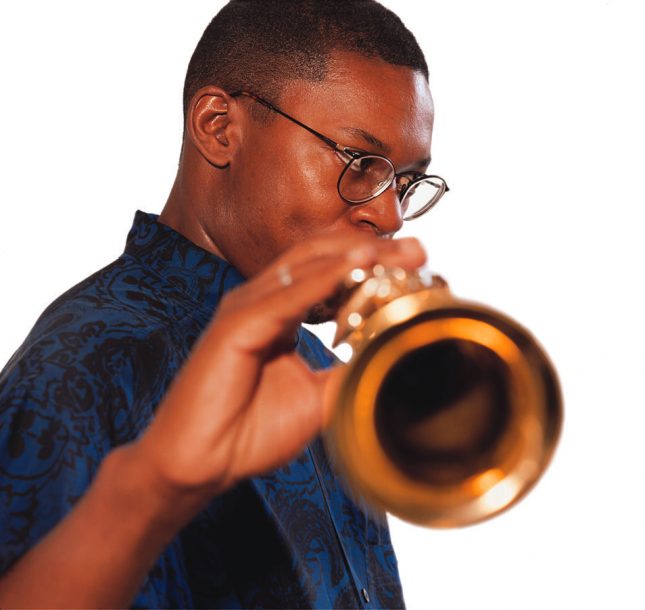 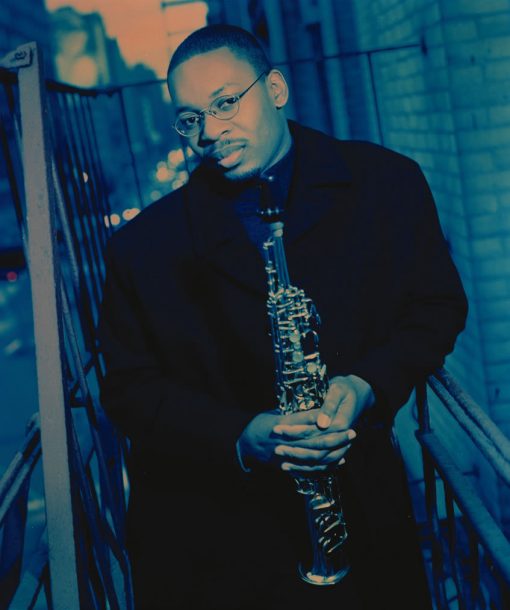 When Billie sang “God bless the child that’s got his own” to the woman in the mirror, she had no idea that an aspiring saxophonist named Ravi Coltrane would hear her advice and take it to heart. As the son of John and Alice Coltrane-two of the deepest musicians of the 20th century-all you amateur therapists would surmise that Ravi was/is your typical underachieving progeny-of-legendary-musician-model case. WRONG! Sorry experts, but Ravi Coltrane is a warp-free, jovial, young rising tenor saxophonist/composer well on the way to makin’ wreck in this jazz life.

Only two years old when his father passed away on July 17, 1967, Ravi never really knew him. Even without Trane’s presence, he and his siblings (John Jr., Miki, Oman) grew up in a house of love and open-ended artistic discourse…all praises due to Mom Alice. And the music they heard-Trane, Stravinsky, Alice’s recording sessions with Pharoah, Rashid Ali (to name a few) in the home studio (Monastic Trio, Journey Into Sachadinanda, Ptah The El Daoud), James Brown, the Jackson 5-you’d think that the Coltrane kids were stage-mothered into jazz. “Absolutely not, it was never presented as something like a chore that we would eventually have to take up, had to learn, had to be a part of, it was always there for us,” says Ravi. “If it was something we wanted to be a part of, our mother was always there, (but) it was really up to us.”

When the family moved to California in ’71, Ravi found himself in a new world where his father’s name and music was virtually unknown. It was your standard-issue kidhood-hanging out, games, movies, schoolwork, guy friends, girl friends. It wasn’t until he reached junior high school that he picked up the clarinet, his first instrument. “It wasn’t like it was time to get involved in music,” he explains. “All my friends were doing it, not on a serious tip, just having fun. I played clarinet through high school but I still didn’t have the idea of being a musician, it was just something I was doing and enjoying. We did classical, marching band, no jazz. There might have been only two musicians in all of high school that I met who knew who jazz people were or knew jazz records.”

As he progressed, music came to be more than mere “fun”… he was feeling it. Noting Ravi’s enthusiasm, his mother gave him a soprano saxophone for his 16th birthday. “I think it was maybe a hint, a little bit of a push. It was like, here, check this out if you really want to continue playing music. I didn’t have the idea of being professional, but I think the soprano was the key to like another side of the music. I wanted to check it out, really, to see with my limited knowledge of the clarinet if I could deal with the saxophone and improvising-but there wasn’t a plan. Some things you just never know, you give it a shot, you learn something, you see what happens. So in ’86, I went to Cal Arts (California Institute of the Arts) and tried to deal with jazz music. I was in an environment where everybody knew the music, I was starting at ground zero in my thinking, it was a little tougher for me.”

Coltrane’s four years of deep-end jazz immersion at Cal Arts were further compounded by a personal loss of innocence-for the first time in his life he was fully aware of John Coltrane, the revolutionary shape-shifter of jazz. “It was a weird dynamic. I do have these feelings for the father I didn’t know, but I also have strong feelings for John Coltrane the saxophonist. It’s funny, people ask me what was it like being his son and uh, my connection with him is kind of mysterious. I’m as connected to his music as other people are, we all have access to the music he left here. But I also have access to other things I can feel, the things I’ve been told all of my life-by my mother, by my cousin in Philadelphia, family photos and home movies that no one else but us have seen-elements I have that exist separate from the feelings I have for him as a musician. All of these things I was able to put together to find my own way.”

Although he didn’t graduate, Cal Arts was a woodshedding haven as well as a springboard for local club and bar gigs (including a summer-long stint with an African soukous band). Post-college and still unsure of his skills, Ravi tentatively waded in the shallows of L.A.’s underground jazz scene. Meeting Elvin Jones during a late ’90 Jazz Machine gig at the Catalina Bar would cosmically determine his future. Praises from friend and bandmember Wallace Roney resulted in an ominous January ’91 phone call from Mr. Jones. “Elvin and his wife asked me if I would be available to do some gigs in a couple of years and I was like, sure…I didn’t even have to check my calendar (laughs). Then they said would you be available for gigs now. I told them that I wasn’t ready. I thought it would be kind of a conflict maybe for me to be in his band, a little too distracting for him, me and for everyone in general. The Coltrane thing was a bit too bizarre, it was hard to just look at Elvin and not think about Trane anyway. Elvin said, ‘Ahhh, don’t worry about it.’ His whole vibe was he just wanted to help me, to get me out there and that I was really wrong.”

The saxophonist’s two-year run with the Elvin Jones Jazz Machine was his crucible, his baptism of white-hot swing. “For me, I was struggling much of the time, he’d hit those cymbals-bam!-kick your ass in a second. It was a great example of what you can learn from being around older musicians, how to exist in an arena where they’re not trying to prove something every night on the bandstand or in the recording studio. You get with a guy like Elvin who’s got everything already, his attitude is really about just getting on the stage and having a good time. To even take a little bit of that, to not feel the urgency that you always have to change and not just feel the music is very useful to a young player. The only downside was people expecting to hear Trane reborn or some other bullshit nostalgia. That was usually all my criticism, I got very cool at sidestepping that type of thing.” God bless the child, indeed.

During and after his time with Jones, Coltrane became a valued player in New York’s elite jazz corps. Championed by Jack DeJohnette and Roney, his skills were welcomed by old and new veterans such as Kenny Barron, Joanne Brackeen, Ralph Peterson, Steve Coleman and Geri Allen (“Her whole vibe, that’s my shit right there. I don’t know what it is-she’s from Detroit, my Mom’s from Detroit, she has like a real spiritual depth to her, she just brings things out of you. I really got a lot from being around her”).

Ravi’s ’94-’97 stints with Coleman’s Five Elements, Metrics, Mystic Rhythm Society and Council Of Balance aggregations yielded four landmark recordings (A Tale of Three Cities, Def Trance Beat, The Signs and the Seal, Genesis), earning him major props in the process. In the midst of all this activity, Coltrane was quietly developing his own thing, composing and fronting his own bands when time permitted. Wary of record label mishandlings of many of his peers, he was content to lay in the cut. “I felt that things just happen in time, it was about trying to create a body of work. You set them off, you stick to it and then eventually things change. I was in no hurry to jump into the musician crap shoot that record companies were throwing.”

In October ’97, the Former Man Without A Plan went into Brooklyn’s Systems Two Recording Studios to record Moving Pictures, his RCA Victor solo debut. Produced by Coleman and pushed/pulled by the likes of Jeff “Tain” Watts, Lonnie Plaxico, Michael Cain, Ralph Alessi and the African Vibrations percussion ensemble, Moving Pictures is one helluva coming-out party. While Trane’s spirit is definitely in the house, Ravi’s exploration of the hidden melodic/ harmonic parallelisms of “Peace” and “Search For Peace” as well as his rococo 6/4 rhythm shifts on the self-penned “Tones For Job Kain” firmly establish him as his own man.

Moving Pictures is not only a significant step for jazz, but a, ahem, giant step for Ravi Coltrane. “I think that should be the goal for all musicians. Don’t copy the style of all the the people who came before. We can be as unique as Monk, Miles and Trane with our music if we just go beyond their notes-that’s the key, that’s what I try to do with my music.” From on high Billie and Trane are slappin’ fives.

Charles Mingus: The Black Saint and The Sinner Lady (Impulse!)

When you’re on TV, everybody knows you, or at least thinks they know you. Take Kevin Eubanks, who was on NBC’s Tonight Show five nights … END_OF_DOCUMENT_TOKEN_TO_BE_REPLACED

Jimmy Katz leads many lives. He is the preeminent currently active jazz photographer, and has shot more than 200 magazine covers and over 600 recording … END_OF_DOCUMENT_TOKEN_TO_BE_REPLACED

Take a look at Blue Note Records’ release schedule for 2022 and it’s hard to miss the significant percentage of electronic-oriented music. In March, the … END_OF_DOCUMENT_TOKEN_TO_BE_REPLACED