Skip to content
Become a member and get exclusive access to articles, live sessions and more!
Start Your Free Trial
Home > Features > Rafiq Bhatia: Everything at Once 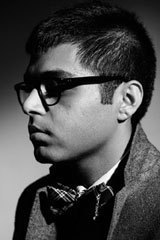 Standing in front of a nearly vacant room at Mercury Lounge on Manhattan’s Lower East Side, the first of seven acts at a CMJ Music Marathon showcase that night, the guitarist Rafiq Bhatia ended his performance as he’d begun it: with an ambient loop of falling rain that gave way to the introduction of a theme, then a buildup of timbres and slicing swaths of rhythm.

The bookends implied something, just like the immersive music that came between them: Bhatia was offering a complete portrait of himself-and that meant going in a lot of different directions. He describes himself as “a listener first, a composer second and an instrumentalist third.” It’s not just a ploy at audience engagement. Innovation is only the sum of one’s influences, and he recognizes that this law carries an added weight nowadays: Catholic listening habits have become almost a baseline requirement for musicians, since the music you’re exposed to in the Internet age is hardly constrained.

So what’s Bhatia listening to, and, accordingly, what does he sound like? The hip-hop and electronic musician Flying Lotus, for sure, and his predecessors in minimalism and dubstep. (During that show at Mercury Lounge in mid-October, Bhatia performed his cover of Flying Lotus’ “Pickled.”) But also the subtle, blue shadings of classic soul; the postbop of Miles Davis and Andrew Hill; and even the low, black clouds of some doom metal. It’s little surprise that Bhatia doesn’t pledge fealty to any particular scene.

In his solos, Bhatia hints at, but never really embraces, the heroic allure of jazz guitar in the wake of fusion, and he often touches on the harmonics and attack of Indian classical music. There’s Bill Frisell in there, and Rez Abbasi. When he plays arpeggios it’s a clenched-up action, no filigree involved. But in spite of all its rigor and intensity, Bhatia’s music-which is available on two recent debut records from the Rest Assured label, an EP called Strata and the full-length Yes It Will-never grates or tries to irk you. More surprisingly, it hardly ever gets muddled. His musical swirl is really about digging into individual moments and seeking refinement.

The title of Yes It Will evokes a line at the end of the chorus to Sam Cooke’s “A Change Is Gonna Come,” which Bhatia reinterprets on the album. In that one vanishing phrase, Cooke settles the conflict that gives the rest of the song its texture, taking us back to the key’s root note and setting us down steadily. Bhatia’s music is full of similar, instantaneous reassurances and surprises. Yes It Will‘s opening track, “Background Music,” starts with five seconds of spinning, Steve Reich-like piano and woodwinds, lays out a theme in inscrutable 19/8, and eventually pours into grainy waves of sound. Then things flatten out and split open for solos by Bhatia and the pianist Vijay Iyer. The piano solo is mid-climb when the chords start to echo with a shivering sound effect and the bass and drums disappear. Then the piano clicks off, and in a half-second of silence you find the time to wonder about a lot of things: Is the song over, just like that? How much else on this record is digitally altered that I’m not aware of? Who does jazz like this? All three instruments start back in, like a car picking up speed after swerving to avoid a crash, and the stakes seem to have been raised by the jolt.

“There’s something about the way that music sounds when it’s improvised in the moment, and people love that: the feeling of discovery. So we captured that, and we built upon it,” Bhatia says. “Let’s match the feeling of discovering something in the moment-this raw, organic sound that we love-and let’s enhance it with these treatments that could never have happened in real time.” To get there, he used-among others-his core quartet, Iyer, a horn section, a couple of experimental chamber ensembles, the emcee High Priest, the producer Valgeir Sigurðsson (who has worked with Björk and Feist) and Bhatia’s main confidante, the engineer and producer Alexander Overington.

Bhatia, 25, grew up in North Carolina, in an Ismaili Muslim family of South Asian descent, though the previous two generations had lived in East Africa. He went through a conflict of conscience in high school, trying to justify a career as a guitarist over something more clearly humanitarian. At Oberlin College, he studied neuroscience and economics but settled on pursuing music.

One reason for that was the drummer Billy Hart, a professor at Oberlin who became his mentor, and who plays on Yes It Will. Another reason, Bhatia says, is that he realized musicians-Cooke, Bob Marley, Jimi Hendrix-were largely responsible for his own social consciousness. “Music really makes a difference in that regard,” he says. “It’s a part of the way we communicate with each other, and it’s a way of dealing with intangibles that’s universally positive.”

When you’re on TV, everybody knows you, or at least thinks they know you. Take Kevin Eubanks, who was on NBC’s Tonight Show five nights … END_OF_DOCUMENT_TOKEN_TO_BE_REPLACED

Jimmy Katz leads many lives. He is the preeminent currently active jazz photographer, and has shot more than 200 magazine covers and over 600 recording … END_OF_DOCUMENT_TOKEN_TO_BE_REPLACED

Take a look at Blue Note Records’ release schedule for 2022 and it’s hard to miss the significant percentage of electronic-oriented music. In March, the … END_OF_DOCUMENT_TOKEN_TO_BE_REPLACED