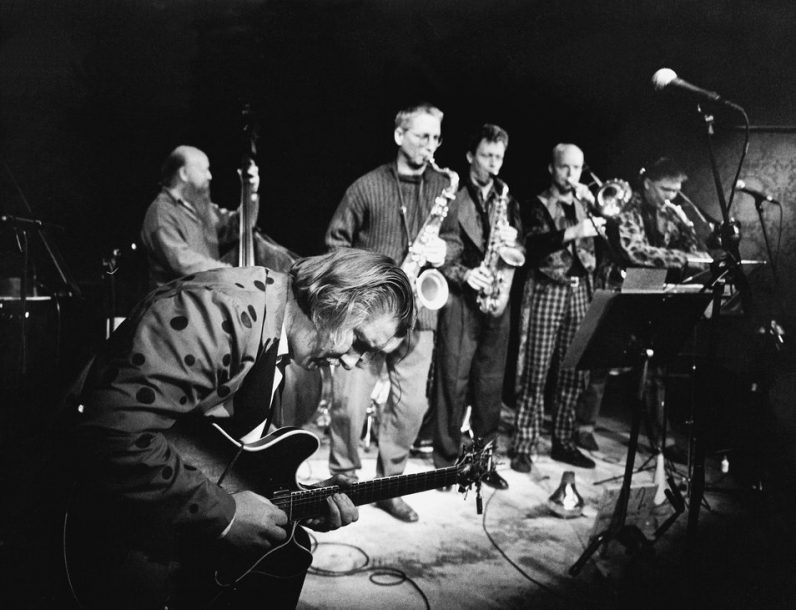 Pierre Dørge often has a slightly impish smile when he talks about his music, a kind of gestural italics for observations like, “I don’t think in a guitar way,” which liberally pepper his conversation. At first, Dørge’s comments and mannerisms come across as second-language reductions of what presumably would be extensive explications of intent and purpose, and their resulting methods, if rendered in the Danish composer-guitarist’s native tongue. Yet, it soon becomes clear that nothing is being lost in translation, that the tenets of Dørge’s coloring-outside-the-lines creativity, and his good-humored subversion of Western art music hegemony, are well encapsulated by surrealist-tinged statements like, “I try not to use too much glue to make music.”

Instead, Dørge, the leader and principal composer of New Jungle Orchestra, uses large dollops of African and Asian musics, as well as early jazz styles, to create an exotically hued, rhythmically vibrant music that is surprisingly accessible. On their 14th recording, Giraf (Dacapo), Dørge and NJO tap indigenous sources ranging from percolating Gambian kora figures to wistful Danish melodies (“being Danish is an ethnic background,” Dørge recently suggested), along with jazz materials stretching from Ellingtonian jungle music to Ornette’s “Lonely Woman.” This minimally glued music would unravel in giddiness or become bogged down with world music pretensions in less adept hands. However, New Jungle Orchestra (which will perform in New York in late September and early October as part of the “Danish Wave” festival) has honed Dørge’s off-center conceptions for nearly twenty years; their unique ensemble cohesion and distinctive improvisational voices make Dørge’s music approachable without diluting its quirkiness.

Dørge’s idiosyncrasies as a composer and a guitarist are not the recombinant strategies of an artist responding to an information-overloaded global village. On the contrary, they reflect Dørge’s formative years in the relatively media-poor late ’50s Denmark, a country years away from exporting high-end stereo components and immaculately pressed LPs. “From the beginning, I tried to listen to everything I could, but I didn’t even have a record player,” Dørge related. “In the ’50s, there was only one hour of jazz a week on Danish radio-‘Jazz Club’ on Thursday nights. There were only four or five modern jazz records released in Denmark a year. It was hard for me to copy anyone. I had to write my own songs because I couldn’t learn standards by hearing them once on the radio. So, my music always sounded different, and it was difficult for me because my music didn’t sound like ‘the real jazz.'”

Though the teenage guitarist’s Copenhagen Jazz Quintet had won a Danish radio competition in ’60, Dørge aspired to become a teacher and was content to play in his spare time. But, in ’69, he met saxophonist John Tchicai. Best known to Americans for his work on John Coltrane’s Ascension and his co-leadership of avant garde units like The New York Contemporary 5 and The New York Art Quartet, Tchicai is a singularly revered figure in Danish jazz, and a recipient of the Danish equivalent of National Living Treasure status. Dørge had saw the first edition of Tchicai’s Cadentia Nova Danica open for Frank Zappa and the Mothers of Invention’s first Copenhagen concert (which yielded “Ian Underwood Whips It Out” on Uncle Meat); the opportunity to work with Tchicai-Dørge made his first recording with Cadentia Nova Danica the day men first walked on the moon-began to bring the elements of Dørge’s unorthodox style into focus.

“I started out playing in a Charlie Christian style, but I became influenced by the fluid quality of horns,” Dørge relayed.”I heard Eric Dolphy in Copenhagen with both Charles Mingus and with a quartet. Both of these concerts inspired me conceptually. The way Dolphy could make a note soar up and down in pitch was something I wanted to do on guitar.

“Also, hearing Don Cherry and Gato Barbieri in concert was very inspiring. The very, very loose way they would play a theme really opened things up for me. I had always thought that themes were always supposed to be very precise, with everybody playing the notes at exactly the same; but the loose, organic way Don Cherry and Gato Barbieri made themes sing was something I tried to do on the guitar, also. But, there is only so much you can do to make a guitar sound that way, because you can’t blow into a guitar. And, there wasn’t a place where I could really develop these ideas before Cadentia Nova Danica.”

Yet, Dørge’s initial tenure with CND was short-lived; later, he played on the saxophonist’s ’77 classic, Real Tchicai (Steeplechase), a trio session including Niels-Henning Ørsted Pederson, and recruited Tchicai in ’80 for NJO (no longer a regular member, Tchicai now enjoys Junglist Emeritus status with the band). For the most part, Dørge spent the ’70s shifting gears (he made an unsatisfying short-lived foray into fusion) and looking for the right collaborators to gain artistic traction. In ’78, he formed Theraenius, an adventurous quartet with keyboardist Irene Becker and saxophonist Morten Carlsen, who would become part of the NJO nucleus. And, by decade’s end, Dørge’s signal relationship with Steeplechase (then a decidedly mainstream label by most measures) grew, availing him the opportunity to record with vibist Walt Dickerson (Landscape With Open Door) and to lead his own quartet date (the engaging Ballad Around the Left Corner, with Tchicai, NHØP, and Billy Hart).

Still, whatever artistic coming of age can be pegged to Dørge’s formation of New Jungle Orchestra, it has to be considered in tandem with Dørge’s sojourn to the Creative Music Studio in Woodstock in 1980. “It was the turning point,” Dørge emphasized. “I think it was the first series of workshops that really tried to mix jazz with ethnic music. It opened the door to rhythm for me. The Mandinko Griot Society were teaching West African rhythms; Nana Vasconcelos taught Brazilian rhythms; there were Turkish musicians, Indonesian musicians; the whole planetary polyrhythmic concept was there. And Karl Berger had a way of bringing it all together creatively. I was learning a lot, and then Karl introduced me to Ornette, so I was able to go to his loft in the Bowery. We would talk, and I would play. He would ask me questions about what I wanted to do, and showed me things about his Harmolodic concept. It wasn’t really a lesson in the usual way; it was Ornette’s way. For a long time after this, I would do new things and wonder how I did them, and then realize it was connected to something Ornette said.”

The cross currents between ethnic music, early jazz, and free improvisation that became a hallmark of Dørge’s work with NJO were not clear to him at the inception of the ensemble. However, it was not an encounter with a visionary like Ornette that made the initial connections for Dørge, but an ’81-2 stint with Danish swing violinist Svend Asmussen’s Quintette du Hot Club de France-modeled unit. “I learned a lot of Ellington’s early music, including ‘The Mooche,’ which we still play,” Dørge recalled. “Many critics talk about how Ellington wrote for his musicians, but they are often referring to the later music. He started that in the ”

’20s, and once I understood that, I understood that the jungle in Ellington’s early music was not just the growls in the brass. Ellington created an environment for his musicians to be in. The early music speaks to me in an immediate way. Maybe it is because it is a very intense music and some of it has a simplicity. I think the simplicity is connected to African music, and it is easy to connect African polyrhythms to the early music, at least for me.”

Then, an ’82 visit to Gambia completed the circle; it was there that Dørge wrote most of the music for the NJO’s eponymous ’85 Steeplechase debut. More importantly, the trip provided Dørge the last piece in the puzzle of creating his own sound. “When I heard the kora in Gambia, and understood the way the kora is played and the sound of the kora, it gave me a new sense of the guitar as a stringed instrument,” Dørge explained. “Not only did I incorporate the kora into my playing but the sound that guitar players in Zaire have, a very clear pop sound with a very short delay. Suddenly, all of this became part of my sound. And it became part of my thinking about composing for New Jungle Orchestra.”

Once in place, Dørge’s inclusive aesthetic served him well. Almost twenty years after its inception, the music of New Jungle Orchestra remains fresh and surprise-filled. Credit a stable core of creative musicians: while such well-known artists as the late Johnny Dyani, Marilyn Mazur, and Hamid Drake have passed through its ranks, the steadfastness of Becker, Carlsen, bassist Hugo Rasmussen, drummer Bent Clausen, and trombonist Kenneth Agerholm-all of whom performed on the first NJO disc-significantly contributed to the band’s solid identity (“solid” may be misleading for such a madcap lot). Adding percussionist Ayi Solomon, saxophonist Jacob Mygind, and brassmen Kasper Tranberg and Mads Hyhne, into the mix gives an Ellington-inspired composer like Dørge more than enough vivid personalities to drive his music.

“I know I only should write so much, and then let the musicians be themselves,” Dørge said of writing for NJO; Dørge also has composed for theater and films. “I can start out with a Webern-12 tone row, combined with African rhythms, and then go into some Ellington combined with Balinese music. It is difficult to make these combinations organic, because it is often impossible to tell musicians what you are trying to do; you are working it out yourself. But if they know you and know how you work, they will play what you have, keep the rest loose, and be themselves, so that you can make it organic together. It cannot be organic if it is too arranged, and it needs to be organic to connect with an audience.

“In this way, I try to connect cultures in jazz, which itself is basically a folk form, to create a global language,” Dørge elaborated. “When we were in China a few years ago, we met a group of musicians called the Lions of Shanghai. These musicians were in the their ’80s and ’90s, and they have played the music of the ’20s all their lives. But, for many, many years, they had to play in secret, they didn’t have records, and they never met other jazz musicians. So, they had only themselves and the music, but that was all they needed to make amazing music. In one way, their music was very Chinese, and in another way it sounded a lot like Sun Ra. Those connections just happen, which is the best way.”

When you’re on TV, everybody knows you, or at least thinks they know you. Take Kevin Eubanks, who was on NBC’s Tonight Show five nights … END_OF_DOCUMENT_TOKEN_TO_BE_REPLACED

Jimmy Katz leads many lives. He is the preeminent currently active jazz photographer, and has shot more than 200 magazine covers and over 600 recording … END_OF_DOCUMENT_TOKEN_TO_BE_REPLACED

Take a look at Blue Note Records’ release schedule for 2022 and it’s hard to miss the significant percentage of electronic-oriented music. In March, the … END_OF_DOCUMENT_TOKEN_TO_BE_REPLACED

Those who are only familiar with bassist Martin Wind’s jazz credentials—both as a leader and as a first-call sideman for Bill Mays, Dena DeRose, Ken … END_OF_DOCUMENT_TOKEN_TO_BE_REPLACED