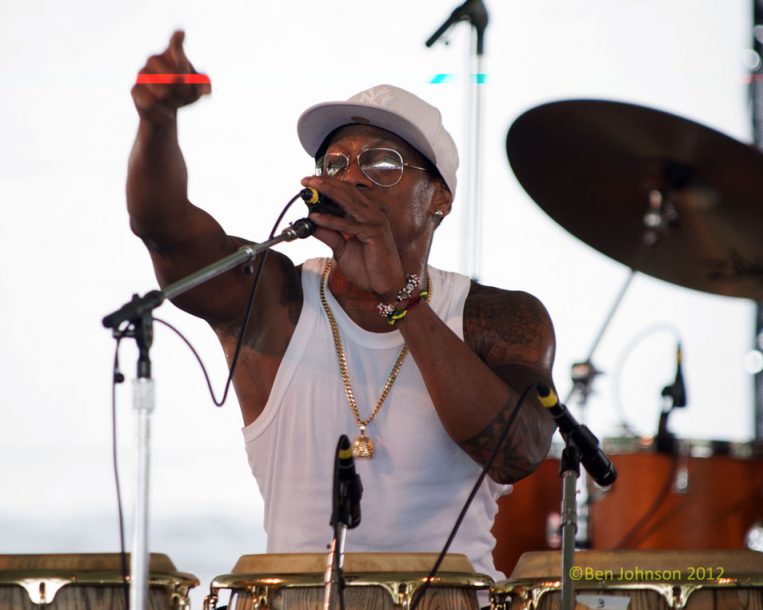 When Pedrito Martinez says he first met Wynton Marsalis the time the trumpeter “came by my house,” the percussionist and vocalist doesn’t mean the place where he hangs his hat. He’s referring to Guantanamera, the Cuban restaurant in Manhattan’s Hell’s Kitchen where the Pedrito Martinez Group holds forth three nights a week. Marsalis isn’t the only fellow musician who’s stopped by: Guitarist John Scofield often sits in, and drummer Steve Gadd was so impressed with Martinez and his crew-pianist and vocalist Ariacne Trujillo, bassist and background vocalist Alvaro Benavides and second percussionist/background vocalist Jhair Sala-that he offered to co-produce the band’s self-titled debut album on Motéma Music.

Those three high-profile fans are among the contributing guests on the record, a progressive variation on Afro-Cuban and Latin traditions that incorporates elements of rock, pop, blues and R&B. Among the album’s 10 tracks are Martinez originals, Cuban standards and refreshingly original arrangements of the Jackson Five ballad “I’ll Be There” and “Travelling Riverside Blues,” written by blues icon Robert Johnson and later updated by Led Zeppelin. “That’s just New York,” says Martinez, who left Cuba in 1998 while touring with Canadian saxophonist Jane Bunnett as part of her Spirits of Havana outfit. “New York is a very cosmopolitan city and you have all the best kinds of music. So it’s easy for me to do that. I’m very curious-I love to mix things-but I never forget the roots, where I came from.”

The four immigrants-Trujillo is, like Martinez, from Havana; Benavides is from Caracas, Venezuela and Sala from Lima, Peru-came together nearly four years ago and arrived at their particular mix and wide-ranging repertoire by woodshedding at the eatery. “Most of the tunes we’ve been playing for a long time, so it was very simple for us to go in the studio,” says Martinez. “It came naturally and we did it live, all together; we didn’t overdub anything except background vocals. We never rehearse. We don’t have to. We used to play there the whole week.”

For Martinez, 40, the acclaim has been a long time coming, something he could only dream about when he was coming up on the island. “I never had the opportunity to go to music school in Cuba,” he says. “I was not lucky like that. In Cuba, if you don’t have connections, someone who can recommend you to a school of music, you’re never gonna be able to go to one. That was my case. I learned on the streets.”

He found his influences however he could. “Remember, Cuba and America have no relations at all,” he says. “It was illegal to listen to American music. People used to listen very softly to the radio and if the government caught you doing that, you could go to jail. But it wasn’t hard to find the music at all because people would sell it illegally-rock like AC/DC, Kiss, Pink Floyd and the Rolling Stones, and R&B like Kool and the Gang, Stevie Wonder, Lionel Richie, and Earth, Wind and Fire. I had all those records in the house.”

Jazz had a profound impact on him, too, and by 2000 Martinez was skilled enough to take first-place honors in the Thelonious Monk International Afro-Latin Jazz Hand Drum Competition. That, he says, “opened a lot of doors for me,” and in quick order Martinez found himself playing with high-profile artists such as Paquito D’Rivera, Brian Lynch, Eddie Palmieri, Steve Turre, Orlando “Puntilla” Ríos and Horacio “El Negro” Hernandez. He’s also played with several top rock and pop artists, including Paul Simon and Sting, was featured in the 2000 documentary film on Cuban music, Calle 54, and is a member of the popular Afro-Cuban/Afrobeat band Yerba Buena, with which he’s recorded two albums.

When he left Cuba, Pedrito Martinez was virtually unknown. Now, when he returns, as he recently did with pianist Gonzalo Rubalcaba, he’s practically given a hero’s welcome. “Now, people listen, and they say I’m representing Cuba,” he explains.

Scofield agrees and extends the plaudits to the entire quartet. “I think Pedrito embodies the Afro-Cuban tradition,” he says, “and the group plays mind-blowing sets. I’ve heard them a number of times now. They stretch the groove so far it’s remarkable. There’s so much for me to learn from Pedrito.”

Martinez is not about to let any of this go to his head, though. “I just always want to do different things and keep developing my ideas and learning from other people who inspire me,” he says. “I just gotta keep going and keep writing music and keep playing with the best.”

When you’re on TV, everybody knows you, or at least thinks they know you. Take Kevin Eubanks, who was on NBC’s Tonight Show five nights … END_OF_DOCUMENT_TOKEN_TO_BE_REPLACED

Jimmy Katz leads many lives. He is the preeminent currently active jazz photographer, and has shot more than 200 magazine covers and over 600 recording … END_OF_DOCUMENT_TOKEN_TO_BE_REPLACED

Take a look at Blue Note Records’ release schedule for 2022 and it’s hard to miss the significant percentage of electronic-oriented music. In March, the … END_OF_DOCUMENT_TOKEN_TO_BE_REPLACED