Skip to content
Become a member and get exclusive access to articles, live sessions and more!
Start Your Free Trial
Home > Features > Pat Donaher Balances Life as a Musician, Teacher, and Yogi 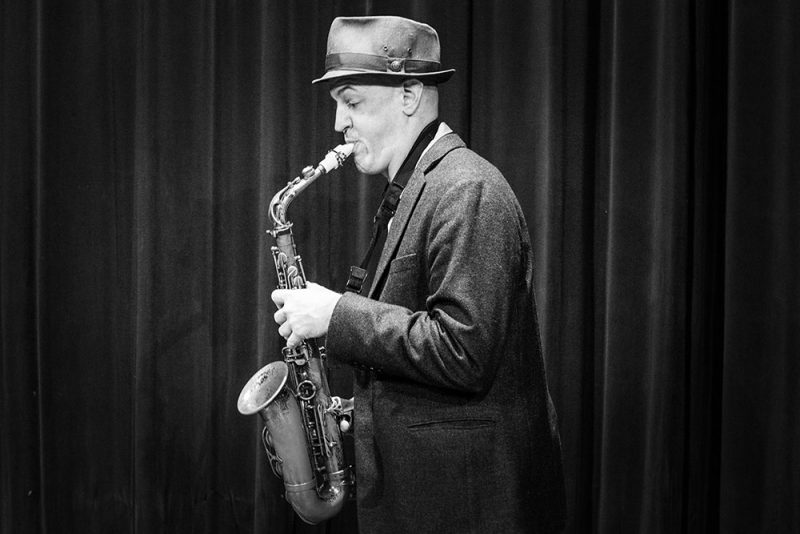 Pat Donaher and Allison Miller first got to know each other in 2018, when the former invited the latter to be that year’s guest artist at Lexington High School outside of Boston, where Donaher is the jazz instructor. During her weeklong residency, Miller took over all the classes usually taught by Donaher. The drummer was impressed by what she calls “one of the most nourishing high-school jazz departments in the country.” She especially liked that Donaher had both his big band and his combos playing her compositions.

“I always appreciate bandleaders who expose their kids not only to the classics but also to modern music that they might not otherwise hear,” Miller says, “to give them a broader sense of jazz. I liked the camaraderie in the program; during lunch hour, they’d all come to the band room. That was my experience in high school.”

Miller also admired Donaher’s high-caliber work on the alto sax. “I loved his openness, his meticulousness, his intonation,” she adds. “His main gig is teaching, but he’s able to jump on the other side and really pull it off. He’s also a yogi”—more on this later—“and because of that he’s able to take his time and let the music develop.”

So when the two musicians met up at the Newport Jazz Festival the following year, Donaher blurted out, “Hey, Alli, I’m thinking of making a new album; if I do, will you play on it?” She not only immediately agreed but also suggested Tony Scherr on bass. To that trio were added trumpeter Jason Palmer and Miller’s pianist Carmen Staaf, both former Donaher classmates at the New England Conservatory of Music. Guitarist Tim Watson, one of Donaher’s former students at Lexington, completed the sextet that made Donaher’s new album, Occasionally.

It’s only fitting that the teaching and playing sides of Donaher’s career are so tightly connected on this album. He’s finally finding the balance between the two that he had observed in his own teachers: pianist Michael Cain at the Eastman School of Music and Bob Brookmeyer at the New England Conservatory. Cain had often said that he wanted a situation “where half the time I’m teaching the students, and half the time they’re teaching me.”

“The fact that I make records and play shows makes what I’m teaching seem real to the kids,” the 46-year-old Donaher says. “And sometimes something will happen while I’m on the bandstand, and I’ll think, ‘Oh, this will help me to explain that problem in class.’ Teaching these kids got me excited about music again when I was pretty burnt, the same way Michael and Brookmeyer got me excited about music in the first place.”

Of course, it helps to have a salary and benefits—especially when the whole entertainment industry shuts down during a pandemic. But the album is also an opportunity to apply the lessons he’s been trying to convey to his students. In his performance classes, he stresses the importance of groove, and in his composition classes he emphasizes melody. Occasionally has plenty of both.

“There’s a lot of modern jazz that just isn’t that memorable,” Donaher observes. “The records I gravitate to are those with themes you can remember, like Alli’s Boom Tic Boom or Joel Ross’ last record. In pop music, it’s rare now to find a melody that moves more than a fifth. I grew up on Stevie Wonder and Michael Jackson, and Brookmeyer always told us, ‘The line is the king.’ I’d rather be memorable than impressive—and melodies are memorable. Playing like Michael Brecker is impressive. Writing like Brecker is memorable.”

Donaher’s new record brims over with earworms—not only in the themes but in the improvisations as well. It helps that Miller, Scherr, and Staaf are an unusually melodic rhythm section, but many of the record’s highlights are created by the two-horn attack of the trumpet and alto. Palmer and Donaher will often state the theme in unison, only to diverge into a melody and countermelody before converging once more, followed by a call-and-response dialogue and an improvised duet before closing back on the theme.

This is especially obvious on the nine-minute “Black Suits, White Smoke,” which begins with drums and piano playing a funereal march. Soon the horns enter and raise the pulse with some aggressive back-and-forth. Even as the pacing slows, quickens, and slows again, the trumpet and alto seem to be shadowing each other in close proximity, each prodding the other with small twists in the melody.

“The range of the alto is very similar to the trumpet and quite compatible with it,” says Palmer, the first guest artist Donaher brought to Lexington. “The two go together really well; think of Bird and Diz, Freddie Hubbard and James Spaulding, Sonny Stitt and Dizzy. When I played with Greg Osby, we did a lot of two-horn things. He’d tell me, ‘When I play high; you play low. When I’m playing a lot of notes, you play fewer.’ You hear a lot of that in New Orleans music, collective improvisation. I brought all that to the album with Pat.”

“With this album I wrote tunes for these players and chose tunes that would fit them,” Donaher explains, “but I also left room for them to add their voices. That’s always the issue: How much do you leave open and how much do you write down? It’s a tension, but it’s a good tension. I wrote ‘Valiant on Valence’ for Jason, because he had gotten me interested in that Ahmad Jamal ‘Poinciana’ vibe when he played a tune like that with my students. But a lot of our duet was improvised.”

When the sextet rehearsed with masks on at Miller’s home in Brooklyn, Donaher welcomed suggestions from everybody—and his bandmates had lots of ideas. This fostered a collaborative atmosphere, leading to arrangements that were a series of events—notated duets, improvised duets, six-way spontaneity, slow bridges, and fast reprises—rather than the usual format of a theme followed by a parade of solos.

“I’ve never been that drawn to the tradition of head-solo-solo-solo-head,” says Miller, who’ll be releasing an unaccompanied duo album with Staaf this fall. “I’m drawn to those moments of collective improvisation, like Miles Smiles and Nefertiti. The compositions were structured to set up collective improvisation. But there was also a vibe; we were encouraged to make suggestions for the arrangements. It wasn’t about Pat telling us what to play. Tony was always saying, ‘What about this?’ and we’d always try it. I think that’s why Pat and I connected.”

“A lot of those moments were completely improvised,” Palmer confirms. “We didn’t rehearse that much. Pat has a really sympathetic ear; he hears what you improvise and then responds. [He also] has this colorful tone to his playing, a quirky approach to tone production I find really attractive. His flow of ideas is very unpredictable, and his compositional approach is the same.”

The album title Occasionally reflects the fact that many of these compositions were sparked by specific events—or occasions, if you will. “Valiant on Valence,” for example, was inspired by a cousin’s wedding in New Orleans and reflects that city’s vibrant outdoor music on corners such as one on Valence Street. “Black Suits, White Smoke” described the funeral for Donaher’s father, attended by the black-suited Jesuits from the high school where his father taught. “624,” presented on the album in trio and sextet versions, was the room number of Donaher’s jazz class at Eastman. “D2” is a tribute to his young nephews Declan and Dennis, who are heard in the background at the track’s end.

“As Duke Ellington once said, ‘I don’t need inspiration; I need deadlines,’” Donaher jokes. “I wanted to write something for my brother and his fiancée, and when I saw the look on her face at the wedding dinner, as if she were realizing, ‘Oh, this is real,’ I wanted to translate that look into a musical theme. I sat down at the piano that very night and wrote the tune that became ‘Wedding Day,’ the first track on the album. That happens a lot. I’ll ask myself, ‘How do I capture this feeling musically?’”

OK, that’s funny, but it also implies a problem. People who dismiss the accordion as soon as they hear it, as soon as it triggers … END_OF_DOCUMENT_TOKEN_TO_BE_REPLACED